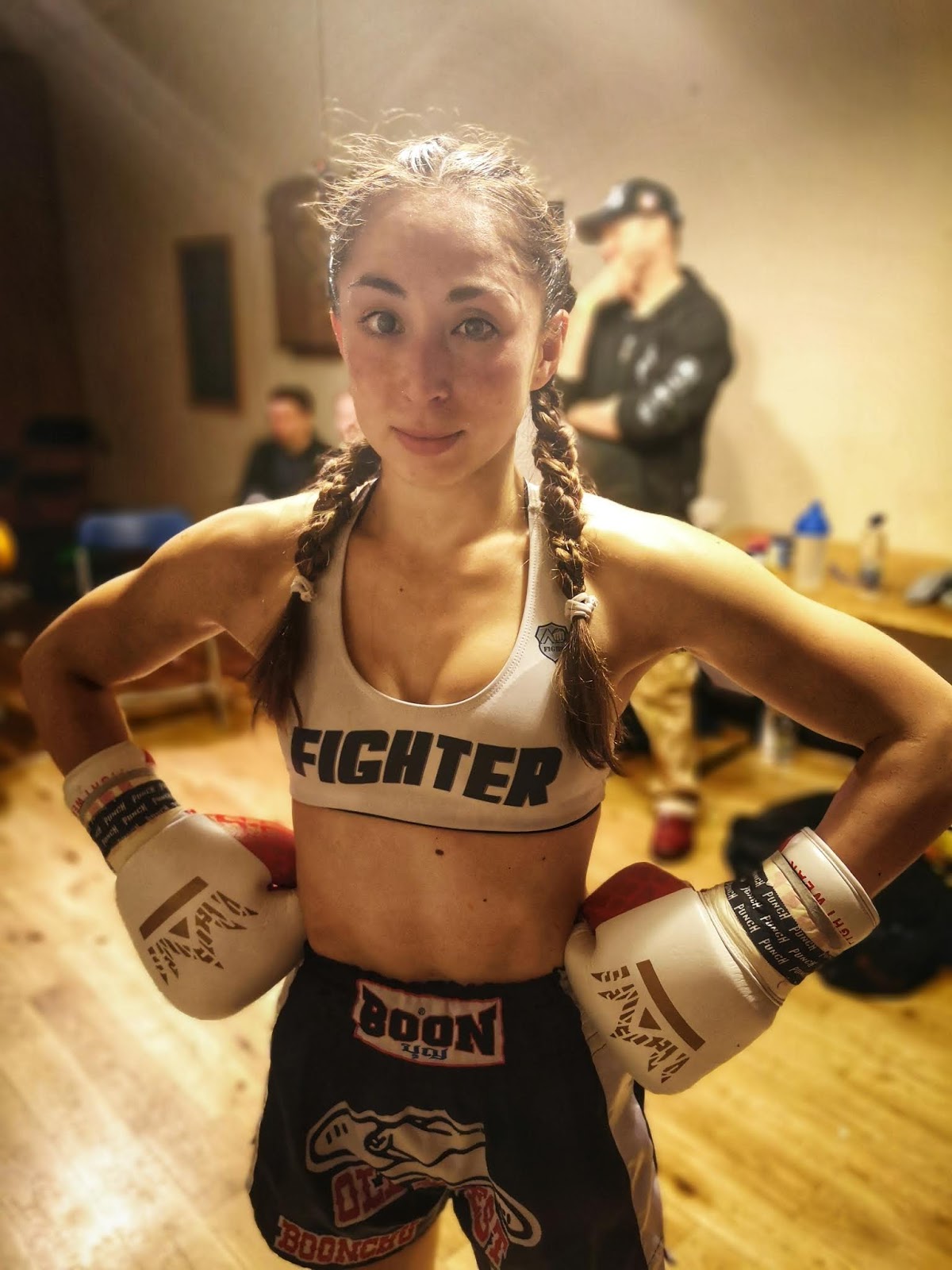 Natalie Gonzales Hills has her post-fight routine all worked out, down to have bringing a yoga mat so she can stretch out and ice her bruises. It’s no surprise then to hear English-Filipino fighter clocked up eight wins in just under a year. She added one more in Dublin at Evolution Fight Night 2 on Saturday.
I was looking forward to seeing Natalie fight because she’s fighting under the famous Boonchu banner, and also because she was facing Jodie Fagan from Waterford.

On the night Jodie fought a tough fight, but Natalie just kept scoring. A slow start, building to a solid show of punches and accurate long knees, she was stacking up the points in every round.

When we spoke afterwards, she said: “I want to watch it all back again, it felt scrappy to me. I’m always critical I guess of how I perform, and I want to  be composed in there. I’m glad it looked good, I’m always looking to make it better.

“I knew Jodie is a European champion, and that she fights very Thai-style..”

Sitting on her mat and applying ice to her shin as we talk, she slowly reveals the trials she went through to get to the ring. Although she’s been fighting under the Boonchu banner in Queensland for a year, she’s from England with English (her dad) and Filipino (her mum) ancestry. If you follow her online, you’ll get a hint of that – Nat Kilapino.

And while there are plenty emigrants trekking home for Christmas, very few will have packed a fight camp and fight in a strange country into the suitcase.

She said: “It’s been an adventure. I came home but because I haven’t been in the UK for years I didn’t have a gym. My friend Kerry Hughes is a fighter and she took me to her friends’ gyms – Semtex in Essex and Five Area Boxing in Clapham. Then we were in Rome for a bit, I trained there too at Gloria Fight Centre.”

Kerry did her corner and warm-up as well on the night, the sort of friend you need when you’re a travelling fighter. So in contrast to everyone else on the night who walked out with at least three people around them and pumping up the cheers from their section of the crowd, Natalie sneaked out.

It was only when she stopped at the end of the walkway to slip off her shoes that most of the crowd realised Jodie’s opponent was even there. You could almost see the penny drop; oh, there’s that girl off the giant poster beamed up on the wall behind the ring.

The crowd was warmed up after a full-on undercard and ready to support the Irish girl, but that didn’t faze Natalie either. Shrugging, she said: “This was not my first time walking into enemy territory, I’ve fought so many hometown girls. It’s just the way it is, you have to fight whoever is out there.”

Her fighting career began in sadly familiar circumstances – randomly attacked while out fundraising for charity, she decided afterwards to fight back and make sure this would never happen again.

This fight on Saturday was fought under professional muaythai rules, no elbow guards. But Natalie has also gone down the IFMA amateur route. She won at National level in Australia which usually means a place on the Muaythai Australia National Team for the worlds.

” I won the nationals in Australia, and really enjoyed that. I would have been on the team, but I couldn’t afford to go to Mexico, the worlds were there this year. I’d like to try that again – I won the State Championships too in Queensland,” she said.

But there’s a few other martial arts in the mix as well. In a nod to her heritage, she’s spent time learning Arnis and Yaw-Yan Fervilleon. And experimenting with MMA – she ruefully admits to having lost five bouts in a row before deciding that striking sports were a better option.

Her record now stands at 11 fights for 11 wins so that journey looks set to continue. She plans to fight in the UK in January sometime before heading back to the sunshine and training at Boonchu. 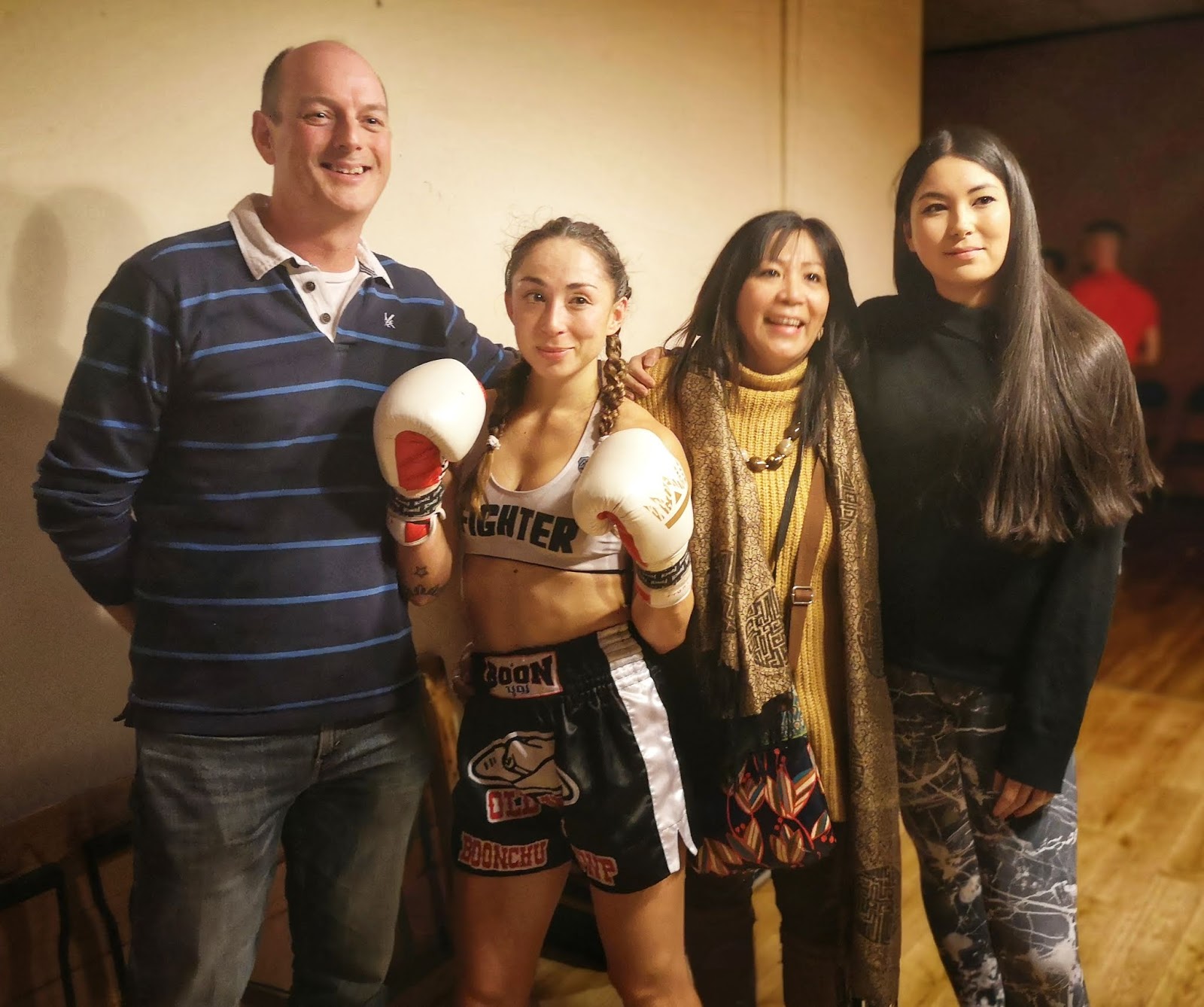 She said: “I’m just planning on having a nice family Christmas now at home, my family flew over here to see me fight in Dublin so now it’s time to just be with them. It’s so great they were here, it’s made the whole night.”

And then it really was time to finish icing that shin, get changed and forget about fighting … just for a while.

Thanks to Evolution Fight Night for having me along to meet the women on the card – more interviews to come! And also for having so many women’s and girls bouts!