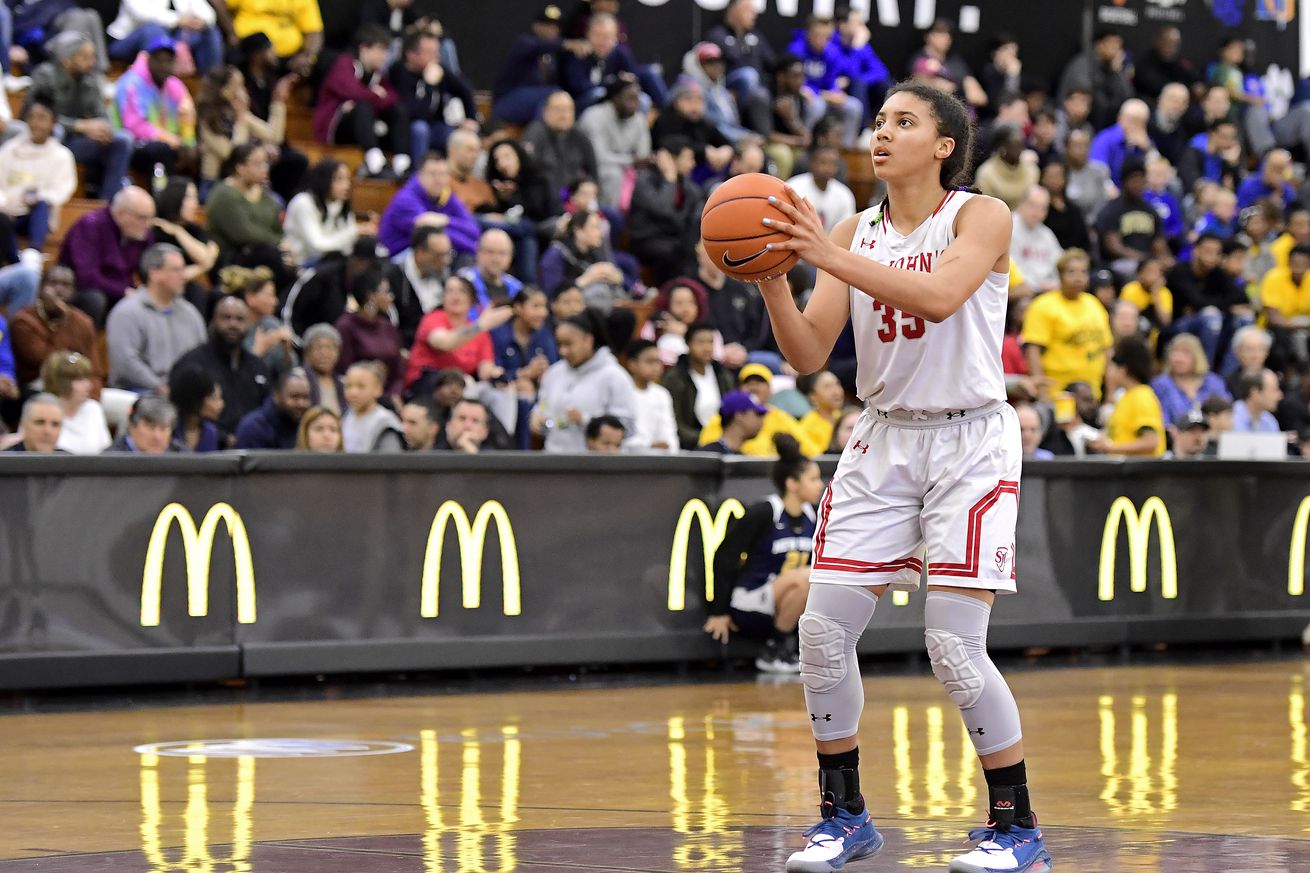 Azzi Fudd is still deciding where to bring her talents in 2021. | Photo by Steven Ryan/Getty Images

Azzi Fudd (undeclared), Olivia Miles (Notre Dame Fighting Irish) and Saniya Rivers (South Carolina Gamecocks) are the top prospects for 2021, while the Gamecocks, Stanford Cardinal and UConn Huskies are poised to become the best teams in 2021-22.

Across the country, eventual 2021 high school seniors are deciding where they want to play college basketball. Here’s a look at the espnW HoopGurlz Top 10 prospects, which features guards in the top three spots and four players who could put the teams they committed to (South Carolina, Stanford and UConn) over the top.

Fudd can flat-out shoot. She can create space for herself and hit from beyond the arc and mid-range. She can also drive to the basket and finish, but prefers to pull up and shoot. Fudd was named Gatorade National Girls Basketball Player of the Year for the 2018-19 season. Washington Mystics star Elena Delle Donne surprised her with the award at her high school.

Miles has an all-round game that could lead to stardom at a school known for guards Skylar Diggins-Smith and Arike Ogunbowale. Miles is a true point guard and a phenomenal passer. She can also shoot the three, drive and finish and has a knack for coming up with steals. She, along with 2019’s No. 6 recruit Sam Brunelle, will be extremely important pieces to Notre Dame’s rebuilding process under new head coach Niele Ivey.

Rivers officially committed to South Carolina on May 30. She will join a program that is full of recent high-profile recruits and will overlap with Aliyah Boston (No. 3 recruit from 2019) and Zia Cooke (No. 4 recruit from 2019) for two years. The Gamecocks also have Laeticia Amihere and Brea Beal, who were the 2019 No. 10 and No. 11 prospects, respectively. When Boston, Cooke, Amihere and Beal are seniors and Rivers is a sophomore, the sky will be the limit for South Carolina.

Rivers is a great all-around scorer and her size and athleticism help her dominate. She is not afraid of contact in the paint when finishing and is a great passer.

Demetre can post up and finish well inside, but may not be playing in the paint as much in college where she will have less of a height advantage. What makes her so good is that she is also a great shooter, including from 3-point range. She will join Haley Jones, the No. 1 prospect for 2019. Jones suffered an injury that sidelined her for much of the 2019-20 season, but put up good stats for a freshman. Stanford has more highly-ranked 2019 recruits in Ashten Pretchel (No. 15) and Francesca Belibi (No. 19). It will also have 2020’s No. 3 recruit, Cameron Brink, on campus in the fall.

The Huskies are looking to return to their dominant selves with 2020’s No. 1 overall recruit, Paige Bueckers — a 5-foot-11 point guard. Adding DeBerry in the frontcourt could form a lethal inside-out game. DeBerry will also overlap with fellow 6-foot-5 post player Olivia Nelson-Ododa for one year, which would make that inside-out game even more dominant. The No. 5 prospect for 2021 is a good passer and can step out and shoot from deep, while also possessing all the skills of a great post player.

Feagin is yet another high-profile recruit joining the Gamecocks and, more specifically, joining Aliyah Boston in the frontcourt for two years. Feagin can handle the ball in transition and has good inside touch. She is also a great defender on the perimeter and inside.

Moore will join a Texas team that recently hired Vic Schaefer as its head coach. Schaefer led the Mississippi State Bulldogs to the NCAA Championship game twice and is looking to take the Longhorns to similar heights. Moore, who is a great inside scorer and not afraid to draw contact, will get to play alongside up-and-coming star Charli Collier for one year. Collier (6-foot-5) has a versatile offensive repertoire that could make her one of the best players in the nation as a junior in 2020-21. Moore will look to fill the void left by 2020 senior forward Joyner Holmes with her physicality and versatile inside game.

The Cardinals lost two-time ACC Player of the Year Asia Durr after the 2019 season and Kylee Shook and Jazmine Jones after 2020. They will also lose reigning ACC Player of the Year Dana Evans before Verhulst joins the team. So Verhulst may be part of a rebuilding process with 2020 recruits Hailey Van Lith (No. 7) and Olivia Cochran (No. 18). She excels at every aspect of being a guard — shooting (from mid-range and distance), distributing, ball-handling and defending.

Iriafen is a great rebounder, shot blocker and inside scorer. She also plays well in transition and was the All-CIF (California Interscholastic Federation) Player of the Year for 2020.

Oelhoffen can hit from three and is crafty inside with her ball fakes. She can score equally as well from the inside as she can from the outside and is also a good distributor. The Beavers lost their one-two punch of Mikayla Pivec and Destiny Slocum to graduation and transfer, respectively. Oelhoffen will be a great addition to Oregon State, which is trying to remain a perennial power after reaching four straight Sweet Sixteens.