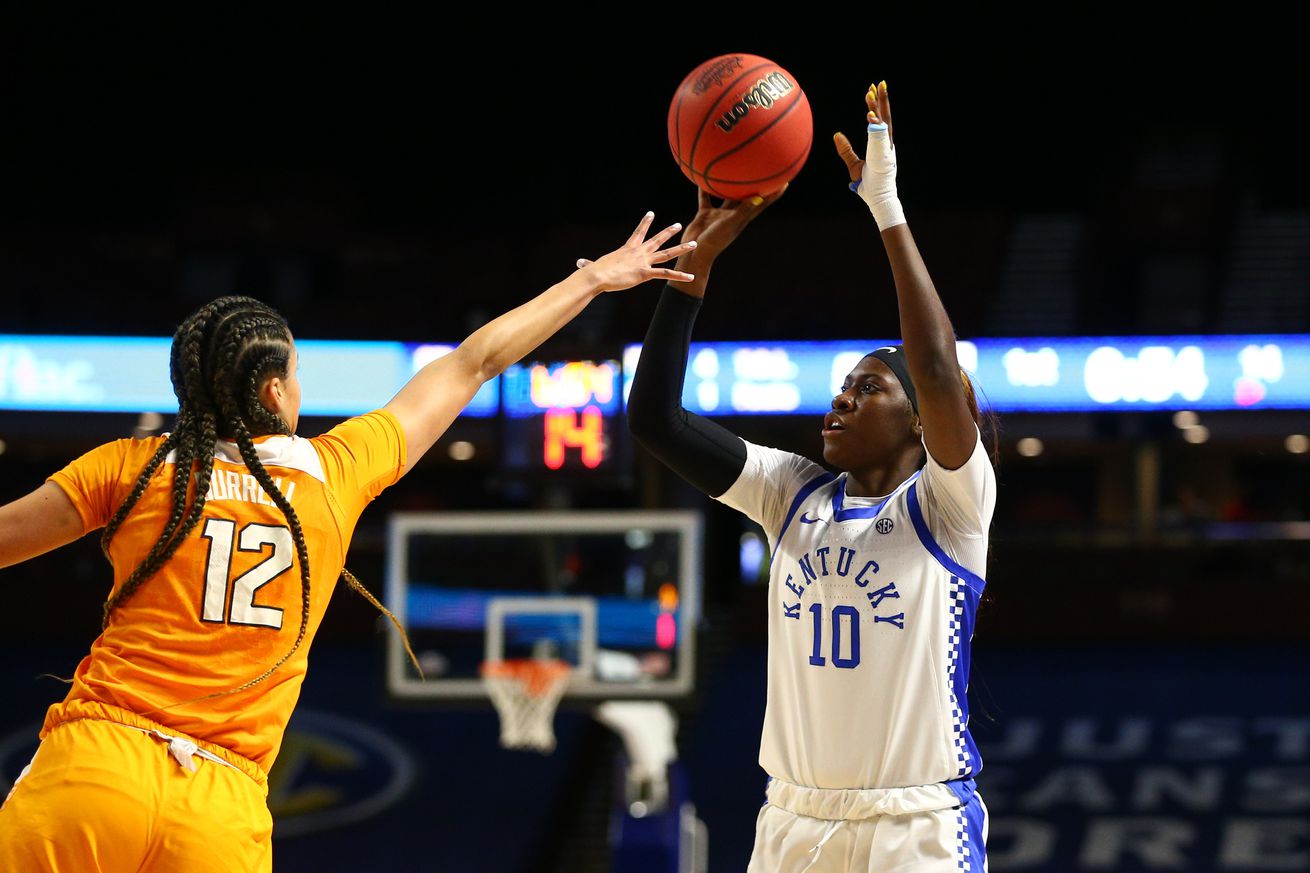 Rhyne Howard (right) takes a shot against the Tennessee Lady Volunteers in the SEC Tournament quarterfinals. The Wildcats won the game 86-65 before losing in the semis to the Mississippi State Bulldogs. | Jeremy Brevard-USA TODAY Sports

The Kentucky Wildcats missed out on a big opportunity early in the season, but still put together a great resume led by the talents of their sophomore superstar Rhyne Howard.

The Wildcats made it to the second round of the NCAA Tournament last year with WBCA Freshman of the Year Rhyne Howard leading the way.

Howard stepped her game up even more as a sophomore All-American, averaging 23.4 points per game, which was good for second in the nation behind only Stella Johnson of Rider, a mid-major school.

Howard had her team within a point of defeating their in-state rival, the Louisville Cardinals (then the No. 7 team in the nation), on Dec. 15. The Wildcats, who finished the season at No. 16 in the AP Poll, remained at No. 14 after the loss. They would rise as high as No. 11 on Jan. 13, but defeating the Cardinals right before SEC play started could have given them the momentum to achieve even greater things.

Kentucky ended up with a 22-8 overall record. In conference play, the Wildcats finished 10-6, earning a four-way tie for third in the SEC. Kentucky landed higher in our bracket than all three other teams: the Tennessee Lady Volunteers (nine-seed), Arkansas Razorbacks (six-seed) and Texas A&M Aggies (a fellow five-seed). The Wildcats built up a better resume than those three, with Top 25 wins over the Aggies and the Mississippi State Bulldogs (second in the SEC) and two quality wins over a very good Tennessee team that eventually fell out of the Top 25.

Highlights: Rhyne Howard drops 37 on the Lady Vols on Jan. 5

The COVID-19 pandemic took the NCAA Tournament away from the Wildcats, but they will be in good shape next year with Howard having the potential to become the best player in the nation. This year she led the Wildcats in not just points, but also rebounds per game (6.5) en route to being named the SEC Player of the Year. She also shot 38.2 percent from beyond the arc with 84 makes.

With five 3-pointers tonight, @howard_rhyne broke the school record for most 3-pointers in a single season with 82 (surpassing Sara Potts who had 81).#WeAreUK | #SECWBB pic.twitter.com/wngQ9F2Zec

The often overlooked senior transfer Sabrina Haines knocked down threes at a 40 percent rate for Kentucky with 56 makes, while junior guard Chasity Patterson was named SEC 6th Woman of the Year after recording the second-best scoring average on the team (11.5).

Patterson and rising senior KeKe McKinney, who shot 41.8 percent from downtown with 23 makes, will be back next year to help out Howard as the team sets their sights higher than last year’s second round exit from the Big Dance.