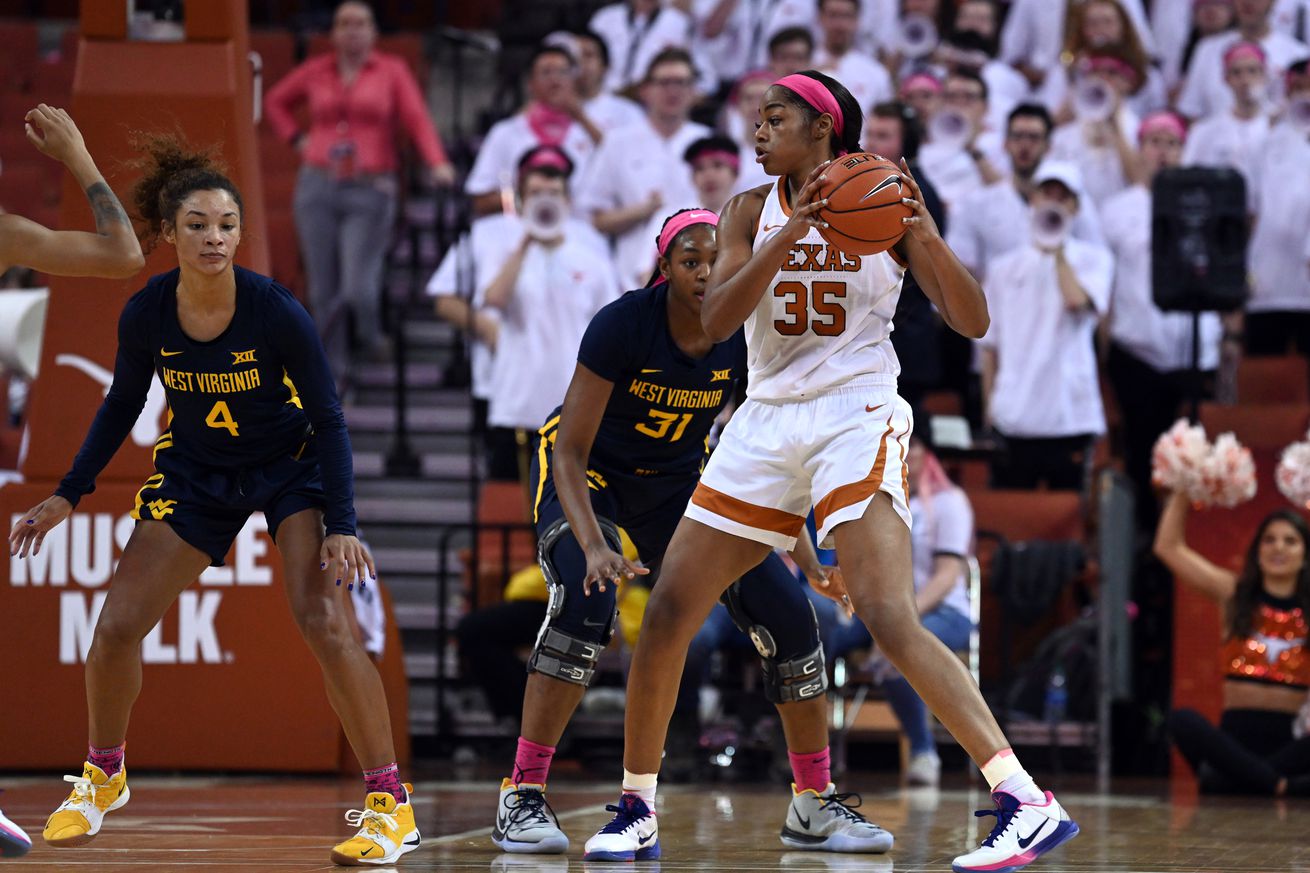 Charli Collier (with ball) looks to pass against the West Virginia Mountaineers on Feb. 17. | Photo by John Rivera/Icon Sportswire via Getty Images

This year, Charli Collier became a sophomore phenom for the Texas Longhorns, whose quality wins canceled out some bad losses. Their win over then-No. 1 Stanford Cardinal on Dec. 22 helped make them a shoo-in and a seven-seed.

The Longhorns (19-11, 11-7 Big 12) came off a disappointing loss in the first round of the NCAA Tournament last year and, according to our bracket, would have been a No. 7 seed again this year if not for the COVID-19 pandemic canceling the Big Dance.

Six-foot-five forward/center Charli Collier emerged as Texas’ best player and led the Longhorns to a solid resume that was highlighted by their 69-64 win over then-No. 1 Stanford Cardinal on Dec. 22.

Texas also picked up quality wins over the Tennessee Lady Volunteers (Dec. 8), Iowa State Cyclones (Jan. 6) and West Virginia Mountaineers (Feb. 17). Tennessee and West Virginia were both ranked during the season, though they didn’t finish that way Iowa State, on the other hand, used a huge upset win over the No. 3 Baylor Lady Bears on March 8 to catapult itself all the way to a No. 9 seed in our bracket.

The Longhorns fell out of the rankings early in the season. They started 1-2 and later lost to the Hawaii Rainbow Wāhine to fall to 4-4 on Dec. 1. They re-entered the rankings at No. 25 on Dec. 23 and were there for two weeks before falling out for good. Even so, Texas fought hard to finish third in the Big 12 behind Baylor (17-1) and the TCU Horned Frogs (13-5).

The Longhorns had the talent to overcome their inconsistency and make some noise in the Big Dance, starting with Collier, who can score inside and out. She averaged 13.7 points and 10.7 rebounds, while also shooting 36.4 percent from beyond the arc with 28 makes.

From Longhorn Network: Collier steps up as a sophomore

Texas was set to face West Virginia for the third time this season before the Big 12 Tournament was canceled. The 1986 National Champion Longhorns would have made the tournament for the 32nd time.

Head coach Karen Aston’s contract was not renewed after the season ended, and Texas hired former Mississippi State Bulldogs coach Vic Schaefer on April 5 with hopes of keeping up the high standard of Longhorn basketball.

Welcome to the Forty, @CoachVic_UT!