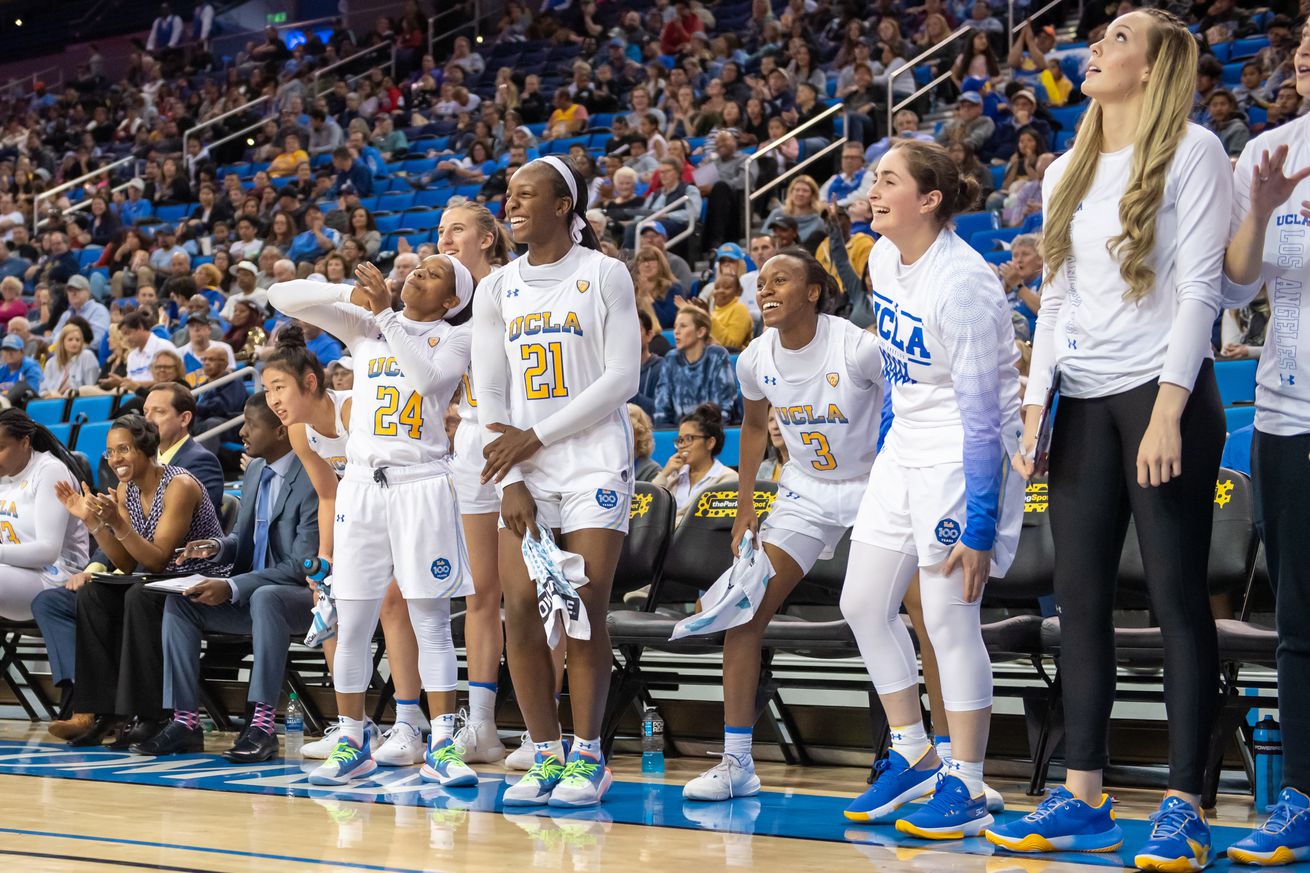 The energetic UCLA Bruins fought their way to a second-place finish in the competitive Pac-12. | Photo by David Dennis/Icon Sportswire via Getty Images

The Pac-12 has become arguably the strongest conference in the country, and the UCLA Bruins continue to rise to the challenges their rivals present. Behind the play of Michaela Onyenwere, the Bruins earned several impressive conference wins, finishing second in Pac-12 play.

The Pac-12 seems to just keep getting better. The Stanford Cardinal, of course, have been among the women’s basketball elite for decades, but the recent rise of programs like Oregon and Oregon State has turned the conference into arguably the nation’s best.

Not to be overlooked are the UCLA Bruins. Cori Close’s program has had its fair share of recent success, sening three Pac-12 standouts to the WNBA (Jordin Canada, Monique Billings and Kennedy Burke) in the past two years.

It speaks to UCLA’s resilience, then, that the team was able to overcome such losses to remain near the top of the conference. In fact, the Bruins’ 26-5 overall record was their best since Close was hired in 2011, and they went 14-4 in Pac-12 play for the third time in the past five seasons, finishing second behind Oregon. One could definitely say that UCLA exceeded expectations; Pac-12 coaches picked the Bruins to finish fourth in the conference in their annual preseason poll.

So what was behind the Bruins’ success? For one, they boasted one of the country’s top juniors in Michaela Onyenwere: an explosive forward who plays much larger than her listed height of 5-foot-11. Onyenwere averaged better than 18 points and 8 rebounds per game for the second consecutive season, earning herself a spot on the All-Pac-12 Team.

Joining Onyenwere on the end-of-season awards list was point guard Japreece Dean, who was awarded redshirt senior eligibility prior to 2019-20. Dean led the team in distributing, assisting on 31.8 percent of the Bruins’ baskets while posting a 2.21 assist/turnover ratio.

Players like Onyenwere and Dean embodied UCLA’s gritty, underdog mentality, one that earned the team quite a few impressive wins in conference play. The Bruins defeated Arizona (a fellow No. 2-seed according to our hypothetical NCAA bracket) in early January, defeated Stanford on the road a month later and swept a two-game series against Arizona State. The Bruins also cleaned up in non-conference play, recording strong wins against UCF (Nov. 30) and Indiana (Dec. 22).

While UCLA lost Dean to the WNBA Draft this past April, the guard position is in good hands: Charisma Osborne, who scored 12.2 points per game as a freshman and hit 59 3-pointers, is poised to inherit a larger role. Meanwhile, Onyenwere should be in the conversation for Pac-12 Player of the Year (and perhaps a WNBA Draft lottery pick) as a senior. Expect the Bruins to continue scrapping among the top of the Pac-12 standings.