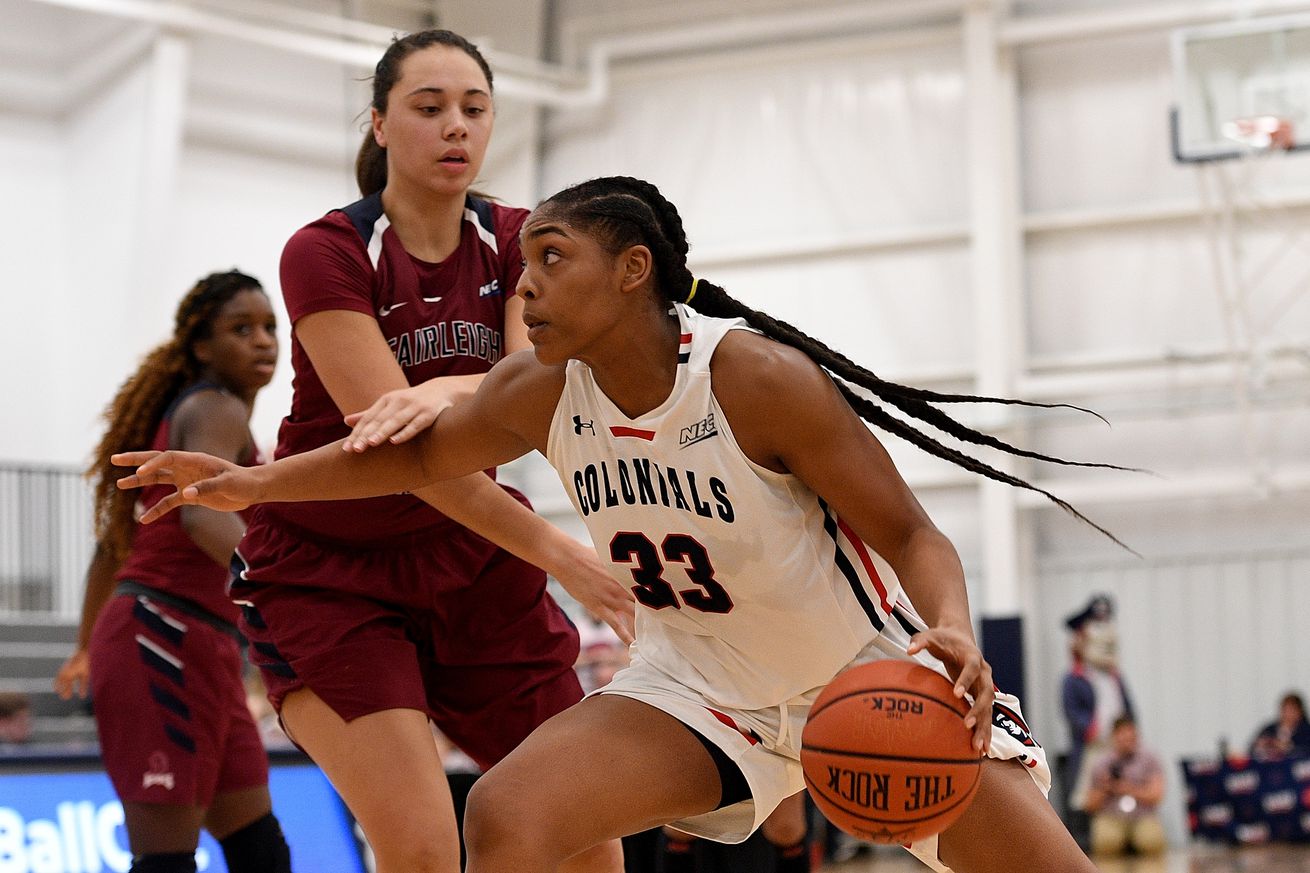 Nneka Ezeigbo (33) as seen during the 2019 NEC Tournament. | Photo by Justin Berl/Getty Images

It was one the best seasons ever for Swish Appeal’s 14th-seeded Robert Morris Colonials, who were led by center Nneka Ezeigbo. They needed two more wins in the NEC Tournament to tie a program record for wins in a season.

The Colonials didn’t get the chance to finish their conference tournament, but they made Swish Appeal’s hypothetical NCAA bracket anyway after winning the NEC regular season, going 17-1.

If selected as a No. 14-seed, the Colonials — who have never won an NCAA Tournament game — would have garnered the second-best NCAA seeding in program history. Robert Morris was a No. 13 seed for its inaugural tournament bid in 2007 and has made the Big Dance five times since, including last year.

Robert Morris’ 2019-20 squad also flirted with the record for most wins in program history, going 23-7 overall. Two more wins as the top seed in the NEC Tournament would have ensured at least a tie for that record (25 wins in 2017-18).

Highlights: Robert Morris defeats the Wagner Seahawks in the NEC quarterfinals before cancellation of tournament

In non-conference play, the Colonials lost to three fellow Swish Appeal selections in the TCU Horned Frogs (No. 8 seed), James Madison Dukes (No. 10 seed) and Kent State Golden Flashes (No. 13 seed). Their one loss in conference play came on Feb. 21 against the Mount St. Mary’s Mountaineers, who finished second in the NEC. Robert Morris later beat Mount St. Mary’s on March 2 and could have faced the Mountaineers again in a winner-take-all NEC championship game.

The Colonials’ leading scorer this year was All-NEC First Team member Nneka Ezeigbo, who averaged 14.1 points and 8.3 rebounds per game. The senior center formed a formidable frontcourt pairing with junior Irekpitan Ozzy-Momodu, as both players nearly averaged a double-double. Ozzy-Momodu was good for 9.3 points and 8.6 rebounds per contest.

But what really carried the Colonials this year was their defense. The team boasted the sixth-best scoring defense in the country, allowing just 52.6 points per game. It also forced an impressive 21.2 turnovers per game. A team that gave the ball up that many times would have been fifth in the nation in turnovers this season. Sophomore guard Isabella Posset was the top thief for the Colonials with 2.3 steals per game.

Robert Morris shot just 28.6 percent from beyond the arc, but made up for it by forcing opponents into a 26.6 clip from outside.

We managed to set some school records