NCAAW Transfer Portal: Oregon Ducks land Taylor Mikesell, with other college stars on the move too 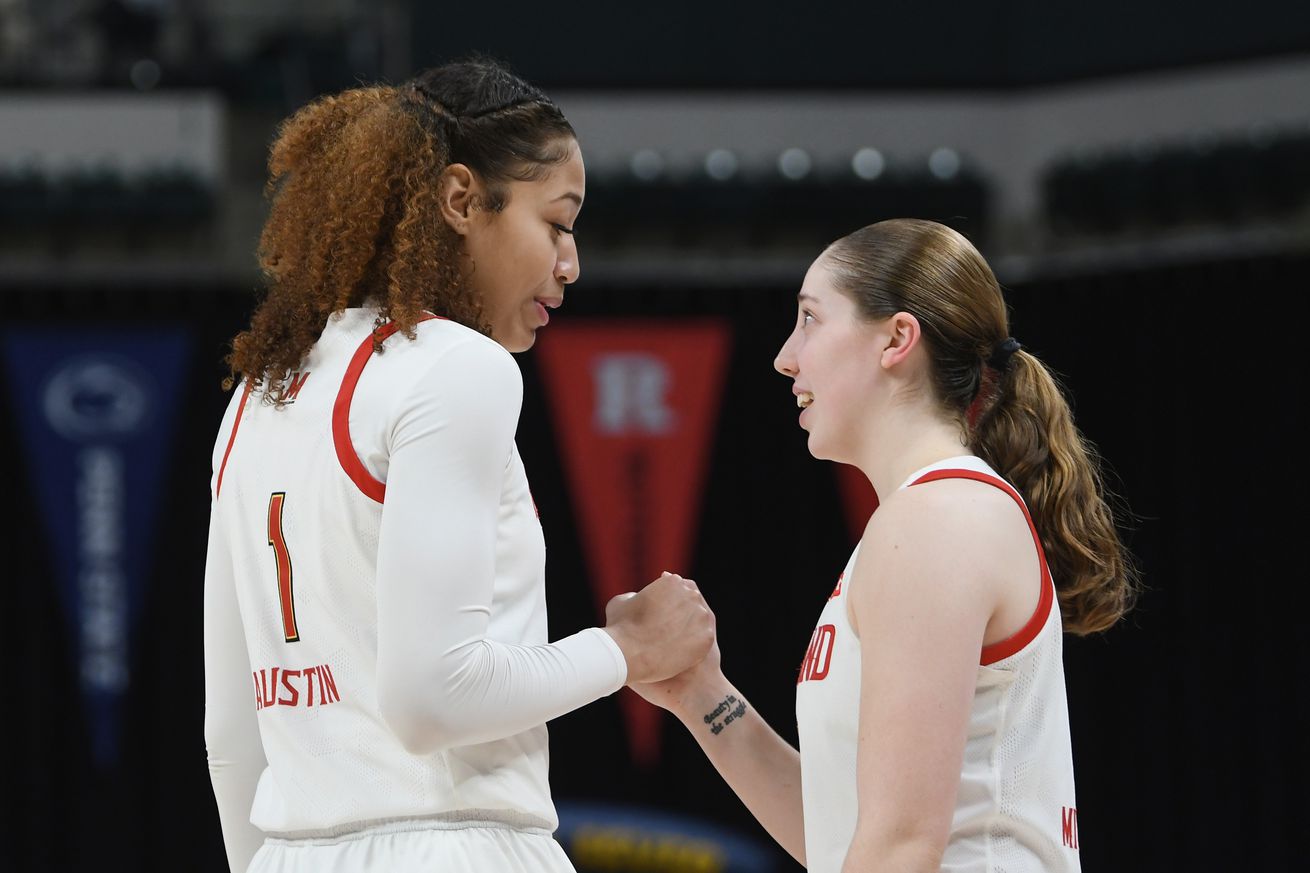 Taylor Mikesell (right) and Shakira Austin (left) bonded as teammates at Maryland. Both will be playing in different uniforms next season. | Photo by G Fiume/Maryland Terrapins/Getty Images

Formerly of Maryland, Taylor Mikesell is headed to Oregon. Her former teammate, Shakira Austin, is going to Old Miss. They are just two of the top-tier college players taking their talents elsewhere.

On Saturday, former Maryland Terrapins sharpshooter Taylor Mikesell revealed her decision to sign with the Oregon Ducks, who lost stars Sabrina Ionescu, Satou Sabally and Ruth Hebard to graduation and the WNBA.

Mikesell joins a surprisingly large number of player entering the NCAA transfer portal this offseason, and some of those decisions may have to do with players and coaches not seeing eye-to-eye. Most often, however, players have good reasons to transfer, such as academics or seeking to be closer to home. But it would not be good to see players rejecting guidance or trying to build super teams at the collegiate level.

Still, no matter the reasons, Mikesell and her peers are flexing their power to direct their own careers.

Everything happens for a reason.. Go Ducks pic.twitter.com/oY1kFDYyT7

Here are the recent top-tier transfers, their statuses within the portal and what they’ll bring to their new teams:

Feature: Taylor Mikesell puts in the work to be a great shooter

As a freshman at Maryland, Mikesell set the Terrapins’ all-time record for 3-pointers made in a single season (95). As a sophomore in 2019-20, her numbers dipped across the board. Yet, she still shot over 40 percent from 3-point range in each of her two seasons — 42.2 percent as a freshman and 40.5 as a sophomore. With 3-point threats Ionescu and Sabally going No. 1 and No. 2 overall in the 2020 WNBA Draft, and a good up-and-coming shooter in Holly Winterburn transferring to UC Davis, Oregon could use a 3-point specialist and Mikesell’s upside is really good.

Carrington may be the best player to have entered the transfer portal this year. She averaged 14.0 points and 7.5 rebounds as a junior at Stanford in 2018-19 before playing in just five games in 2019-20 due to injury. After considering UConn and Oregon, Carrington signed with Baylor and the Lady Bears are lucky to have her as a weapon against top rivals like the Huskies and Ducks. ESPN ranked Stanford No. 2 heading into next year in its projection published on March 25. Baylor, meanwhile, was ranked fifth.

Carrington just shifted the balance of power in women’s college basketball quite a bit.

Slocum, a battle-tested Pac-12 standout who played two seasons with Oregon State after starting her collegiate career at Maryland, has transferred again. Will the third time be the charm for Slocum with the Arkansas Razorbacks? She saw more playing time as a Terrapin than she did as a Beaver, but upped her playing time by 2.6 minutes in the 2019-20 season, her second in Corvallis, where she starred alongside Mikayla Pivec. Slocum will replace Arkansas graduate Alexis Tolefree and join Chelsea Dungee and Amber Ramirez to form a dangerous 3-point shooting backcourt in Fayetteville.

Maryland head coach Brenda Frese was very high on Austin during her freshman year and envisioned her as an early first-round WNBA Draft selection. But Austin has now departed Maryland after two seasons. She is a great blocker with help from her 6-foot-5 frame and sharp instincts. Austin is also fast for a post player and, therefore, can beat opponents off the dribble and drive from the top of the key. Her inside moves and touch both improved in 2019-20 as well. Austin will be a great help to Ole Miss. Still, it’s surprising that she would leave what could have been a title contender in Maryland to play for a team that went 0-16 in SEC play for the 2019-20 season.

In 2019-20, Pitts was the best player on a Minnesota team that seemed like it was going places. The Golden Gophers went undefeated in non-conference play in 2018-19 when Pitts was a sophomore and playing under first-year head coach Lindsay Whalen. But Minnesota couldn’t sustain that success long enough to make the NCAA Tournament. Any hope they had of bouncing back in 2019-20 ended when they went on a five-game losing streak that lasted from late-December to mid-January, and Pitts was suspended for “body language” and subsequently left the team midseason.

Bell was a big-name recruit (No. 8 according to HoopGurlz) in the high school class of 2019 and became Ohio State’s second-leading scorer for the 2019-20 season. She scored 14 points in the team’s signature win over then-No. 2 Louisville (Dec. 5). The 6-foot-1 Bell is a tall, athletic guard who can do it all on offense. Florida Golf Coast went 30-3 for the 2019-20 season but is undergoing a complete reload with its three tops scorers — Keri Jewett-Giles, Davion Wingate and Nasrin Ulel — all graduating. The Eagles are hoping Bell and their six other new players can fill the void.

Bibby was a key member of the Mississippi State Bulldogs’ starting lineup in the 2018-19 and 2019-20 seasons. Before sustaining an injury in the middle of the 2018-19 season, Bibby was averaging a career-best 11.9 points per game. She was a rotation player as a freshman when Mississippi State made a run to the national championship game and lost to the Notre Dame Fighting Irish. Bibby is a 6-foot-1 forward who will bring experience and leadership to a Maryland team that lost four seniors to graduation and two others to the transfer portal.

Nebraska intended for Brown to be its leading scorer — but in a unique way, by coming off the bench. Brown, a 6-foot-1 forward, was named the Big Ten’s Sixth Player of the Year as a sophomore in 2019-20. She wanted to be closer to her home in Auburn, Indiana, and will have the chance to play at least one season with Naz Hillmon and Amy Dilk, who have the Wolverines on the rise. Hillmon and Dilk will be juniors in 2020-21 and Brown will join them on the court in 2021-22 if not granted a waiver sooner.

Green, a 6-foot-0 guard, averaged 9.6 points, 4.0 rebounds and 2.3 assists as a freshman in 2018-19 before an ACL tear limited her to just two games in 2019-20. She will join Pitts in College Station as the two try to help the Bulldogs make up for the loss of Chennedy Carter — the most prolific scorers in the nation before being selected at No. 4 overall in the 2020 WNBA Draft. Green was the No. 10 overall recruit in 2018.

Owens was the No. 13 overall recruit in 2019, but only played around 10 minutes per game during the 2019-20 season. She may find success as a point guard at Baylor, however. The Lady Bears used one-guard transfers Chloe Jackson and Te’a Cooper to help them find success in the 2018-19 and 2019-20 seasons, respectively. Jackson made the game-winning layup in the 2019 NCAA Tournament championship game. Cooper, meanwhile, averaged 13.6 points and 4.6 assists during her one year in Waco and was selected No. 18 overall by the Phoenix Mercury in the 2020 WNBA Draft.

Rutgers hoped Davenport, a 6-foot-4 center, would help bring the Scarlet Knights back into national prominence. The team had an NCAA Tournament-worthy season, but Davenport failed to contribute in any significant way. The 2019 No. 14 HoopGurlz recruit will be closer to her Troy, Alabama, home while attending school in Athens.