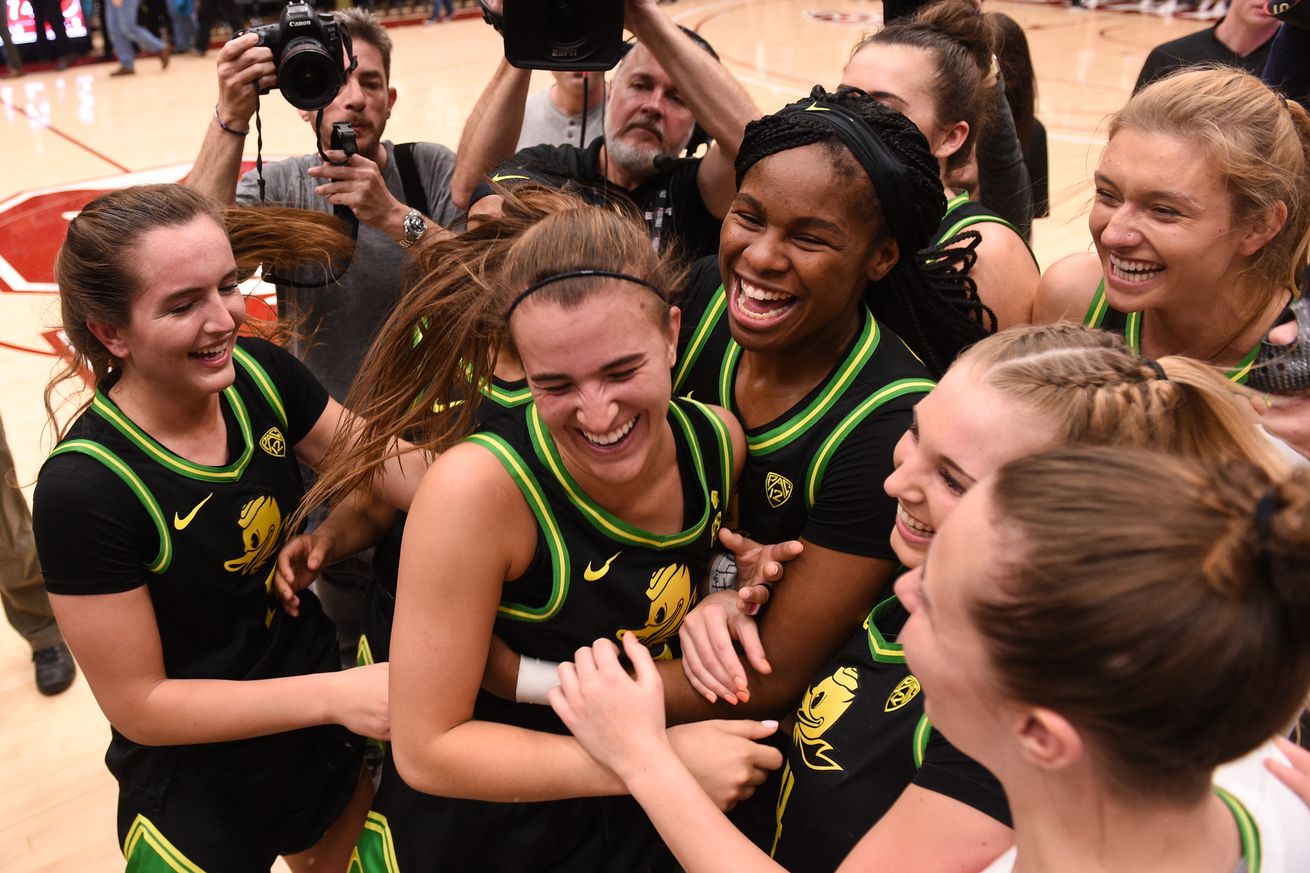 Sabrina Ionescu of the No. 3 Oregon Ducks has created an exclusive club that only she is a part of. Meanwhile, the No. 1 South Carolina Gamecocks and No. 10 NC State Wolfpack celebrate historically good regular seasons.

“Around the NCAAW Weekly” highlights the notable events of the week. Check out the milestones, surprises, best games and outstanding performances for games played through Sunday, March 1:

Ionescu’s highly-anticipated 1,000th rebound came in the No. 3 Oregon Ducks’ win over the Stanford Cardinal on Feb. 24, making her the first player in Division I college basketball history to collect 2,000 points, 1,000 boards and 1,000 assists over the course of a career. Ionescu, who spoke at Kobe Bryant’s memorial service on the same day, also recorded her 26th career triple-double with 21 points, 12 rebounds and 12 assists.

No. 10 NC State Wolfpack lights up from 3

The Wolfpack’s 13-straight 3-pointers on Sunday set a new NCAAW Division I record. The previous record, 11, was achieved on March 3, 1996, by the TCU Horned Frogs and repeated on Feb. 6, 2016 by the Bowling Green Falcons.

The Wolfpack won 14 ACC games during the regular season, a new program high.

The Gamecocks finished their regular season with a win over the Texas A&M Aggies on Sunday, giving them a 16-0 SEC record. A team going 16-0 in conference play has happened only four times in SEC history. The victory was South Carolina’s 23rd-straight. Prior to Sunday, the Gamecocks’ best winning streak was 22 games during the 2015-16 season.

Last week, the Cardinals won their third-straight ACC regular-season championship. This year, Louisville is the ACC’s outright champion for the first time (two games ahead of NC State). The last time Louisville won a regular season outright was in 2000-01 when it was a part of Conference USA.

On Sunday, the Terrapins defeated the Minnesota Golden Gophers by 55 points. That’s the most lopsided win Maryland has ever secured in Big Ten play.

Vanderbilt Commodores over No. 16 Kentucky Wildcats, 70-64, on March 1

Not only were the Commodores (14-16, 4-12 SEC) a huge underdog in this game to begin with, they also trailed by nine points entering the fourth quarter but came back to win the final period 24-9.

Notre Dame, the 2018-19 national runner-up, has had a rough season (13-17, 8-10 ACC) and it was surprising to see the team defeat a talented team in Florida State. Fighting Irish freshman Sam Brunelle scored 25 points in the win.

In a loaded Pac-12 this year, Cal (11-18, 3-15 Pac-12) was one of the teams not to be feared. But the Golden Bears still pulled off this upset against an Arizona team that had just pulled off an impressive win over Stanford.

Games of the week

Arizona’s Aari McDonald made a midrange jumper with nine seconds left in overtime to defeat the Cardinal in this thriller. She also made two free throws with 15 seconds left in regulation to force the extra frame and finished with 20 points. Kiana Williams of Stanford led all scorers with 27 points.

Here’s a postgame interview with the hero of the game:

Western Kentucky came back from being down eight to start the fourth quarter and played even with Middle Tennessee in the first overtime. The Blue Raiders pulled away in the second overtime. Anastasia Hayes poured in 37 points for the winners and also notched 11 rebounds. In a game full of stellar individual performances, Alexis Brewer scored 28 points in defeat and her teammate Raneem Elgedawy recorded 19 points and 18 rebounds.

Kent State dominated the second overtime 13-3 after Nia Blackford made a layup at the buzzer of the first overtime period to save the Golden Flashes. In regulation, it was Bowling Green’s Kadie Hempfling making the clutch shot — a jumper in the paint — to send the game into overtime. Kent State made an incredible comeback in the second and third quarters after being down 25-8 after the first. Katie Sumate led the Golden Flashes with 27 points, while Bowing Green’s Caterrion Thompson scored a game-high 32.

Ashley Joens: 29 points and 13 rebounds for the Iowa State Cyclones in a win over the West Virginia Mountaineers on Feb. 29.

Ruthy Hebard: 28 points and 14 rebounds for the Oregon Ducks in a win over the Washington State Cougars on Feb. 28.

Jaylonn Walker: 41 points for the Sam Houston State Bearkats in a loss to the Abilene Christian Wildcats on Feb. 26.

Lexi Gordon: 30 points and 11 rebounds for the Texas Tech Red Raiders in a win over the TCU Horned Frogs on March 1.