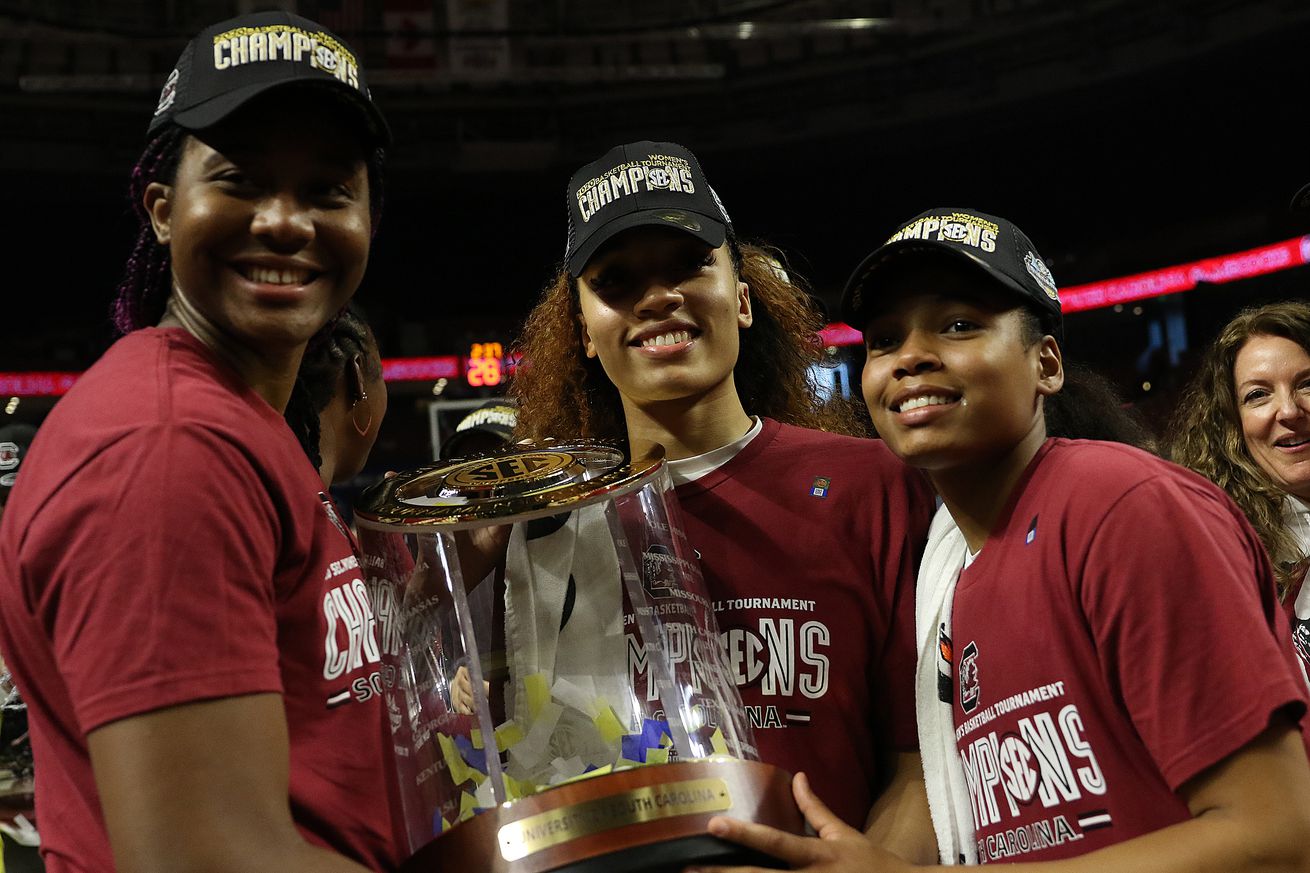 Aliyah Boston (left) took the country by storm. She and fellow freshmen Brea Beal (center) and Zia Cooke hope to keep the Gamecocks at the top next year. | Photo by John Byrum/Icon Sportswire via Getty Images

Aliyah Boston, Brea Beal and Zia Cooke made an immediate impact on the South Carolina Gamecocks’ program, while seniors — and 2017 national champs — Tyasha Harris and Mikiah Herbert Harrigan capped their careers with a No. 1 national ranking.

The Gamecocks (32-1, 16-0 SEC) started 2019-20 at No. 8 in the AP Poll and finished as the No. 1 team in the nation for the final 10 weeks of the season. Their sole loss came on Nov. 28 against the No. 20 Indiana Hoosiers at the Paradise Jam; the Gamecocks regrouped and dominated from that point forward.

South Carolina won a total of 12 games against teams that finished in the Top 25 and also defeated the Tennessee Lady Volunteers, who were ranked at No. 22 at the time (Feb. 2). In a season in which the No. 2 Oregon Ducks, No. 3 Baylor Lady Bears, No. 4 Maryland Terrapins and No. 5 UConn Huskies were all extremely talented, South Carolina shone the brightest with wins over the Lady Bears (Nov. 30), Terrapins (Nov. 10) and Huskies (Feb. 10).

Highlights: South Carolina defeats UConn for the first time ever

With COVID-19 forcing the cancellation of the NCAA Tournament, the Gamecocks never got a shot at the Ducks, who many regarded throughout the season as the best team in the nation. But South Carolina may have been the favorite in a championship game showdown, which speaks to how well the team chemistry came together in Columbia — Oregon was a heavy favorite to win it all in the preseason.

National Freshman of the Year and SEC Defensive Player of the Year Aliyah Boston could have been the difference-maker if the Gamecocks met the Ducks in the the Big Dance’s final game. Boston’s defensive skills and ability to create for herself in the paint would have given South Carolina more of an edge in half-court sets than Oregon’s edge in transition.

Add to Boston the savvy point guard play of senior Tyasha Harris, who joined Boston on the All-SEC First Team, as well as the speed of freshman guard Zia Cooke and increased scoring from senior forward Mikiah Herbert Harrigan, and you get a very well-rounded South Carolina team.

Harris, Herbert Harrigan, Boston, Cooke and freshman Brea Beal started in every single game, while Destanni Henderson (8.5 points per game) and LeLe Grissett (6.4) were key contributors off the bench. Herbert Harrigan made the All-SEC Second Team before she and Harris were selected at No. 6 and No. 7, respectively, in the 2020 WNBA Draft.

First EVER Naismith Player of the Year to win Naismith COACH of the Year – @dawnstaley https://t.co/bExc7vIDB4 pic.twitter.com/LJVCBZisks

On March 8, South Carolina capped its season with an SEC Tournament championship — the last piece to the puzzle of the best resume in the country.