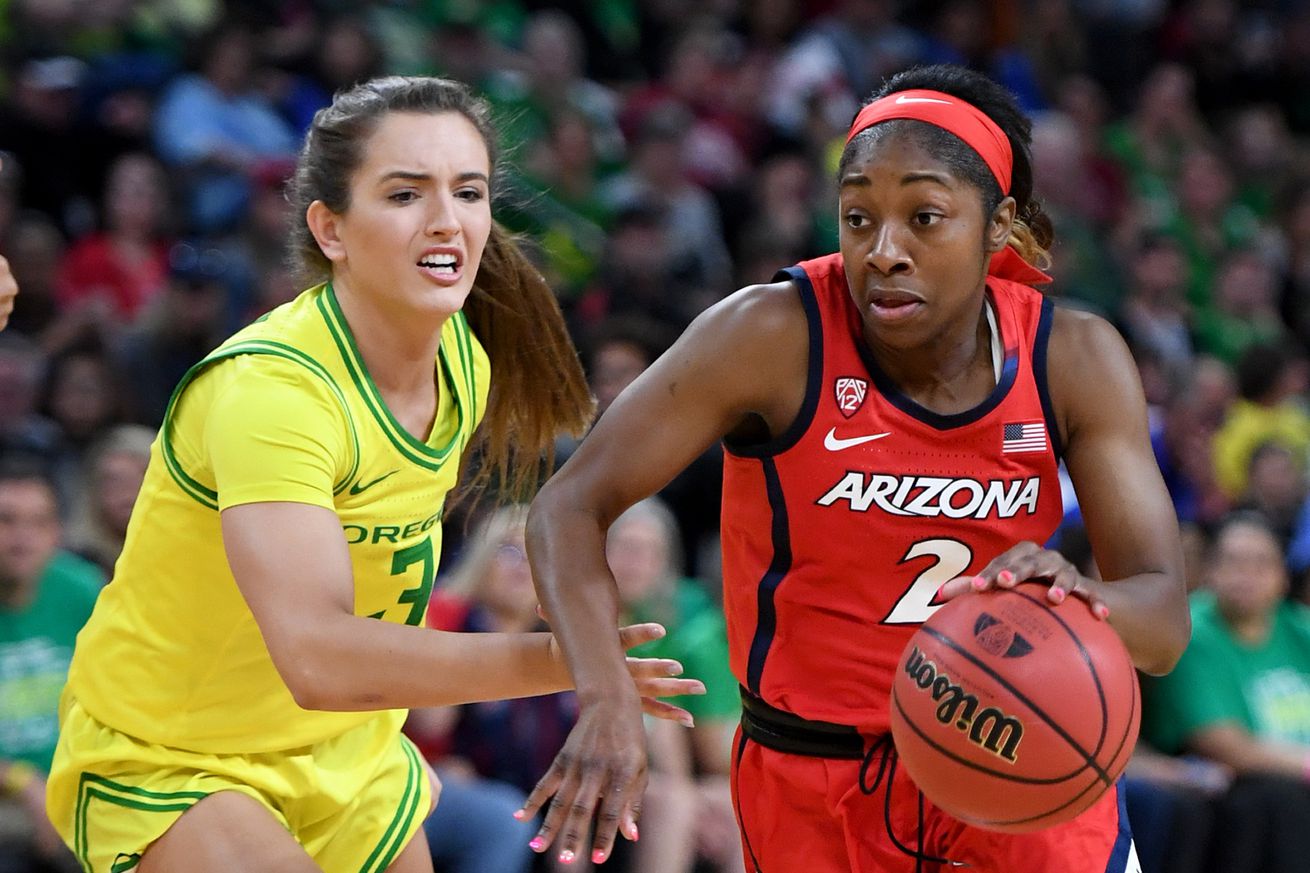 The time is now for Aari McDonald (with ball) and Arizona to compete for a Pac-12 title. | Photo by Ethan Miller/Getty Images

We’re entering a new era of Pac-12 women’s basketball. As the Oregon Ducks are now in rebuilding mode, the top of the conference is wide open, with the Stanford Cardinal, Arizona Wildcats and UCLA Bruins all viable candidates to be the next Pac-12 champion.

It took some doing, but it looks like we’re going to have Pac-12 women’s basketball this season after all.

In a September announcement made by the conference, the Pac-12 confirmed that football, basketball and winter sports would resume for 2020-21, with the conference and its members taking necessary precautions to keep their student-athletes safe during the ongoing COVID-19 pandemic.

Pac-12 women’s basketball is set to return on Nov. 25, with each team playing each other twice in a 22-game schedule. Unfortunately, we don’t know much more than that yet. Per SportsPac12’s Kim Doss, it’s likely that Pac-12 teams will flesh out their nonconference schedules with games against nearby opponents, but times, dates and matchups have not been announced.

Here’s one thing we do know: the competitive landscape of Pac-12 women’s basketball has shifted. With the Oregon Ducks graduating three first-round WNBA draft picks in 2020, an opportunity has opened for the conference’s “best of the rest,” namely the Stanford Cardinal, Arizona Wildcats and UCLA Bruins.

The storylines are compelling. Can legendary Stanford head coach Tara VanDerveer add one more conference title — and perhaps even more — to her enormous legacy? Will Arizona’s Aari McDonald or UCLA’s Michaela Onyenwere emerge as the Pac-12’s best player or will someone else surprise us?

As for Oregon, it may be down, but it’s not out. With an enormous amount of freshman talent coming in, how long will it be until the Ducks are at the top of the conference again?

The media has taken attention, too. ESPN’s “Way-Too-Early Top 25” (which, admittedly, is definitely way too early) has five Pac-12 teams listed: Stanford at No. 2, Arizona at No. 8, UCLA at No. 9, Oregon at No. 10 and Oregon State at No. 15. Meanwhile, the NCAA’s own preseason ranking has Stanford, Arizona and Oregon in its top 10.

WNBA-caliber talent, competitive balance, top-tier coaching and recruiting — it’s all there. The circumstances may be different than what we’re used to, but the basketball should remain excellent. The Pac-12 will be a must-follow conference for the 2020-21 NCAA women’s basketball season.

Rewind: A look at where the Pac-12 left off

The Pac-12 was well-represented in the weekly Associated Press Top 25 throughout the 2019-20 season, boasting six teams (Oregon, Stanford, UCLA, Arizona, Oregon State and Arizona State) in the poll’s final installment prior to the COVID-19 pandemic. The Oregon Ducks — who won the Pac-12 regular-season title and finished the season ranked No. 2 overall in the AP poll and in Swish Appeal’s hypothetical NCAA bracket — cruised to the conference championship, easily handling the Stanford Cardinal 89-56 in the final round.

The NCAA Tournament, of course, was canceled shortly thereafter as COVID-19 began to sweep the nation, robbing the Pac-12 of the chance to prove itself as America’s top women’s basketball conference. Oregon was considered by many the favorite to win the NCAA Tournament, while upstart programs like UCLA and Arizona were also poised to make noise on a national stage.

While Oregon’s dominance and amount of WNBA-bound talent ended up hogging the spotlight, the Pac-12 still enjoyed one of its most competitive and exciting seasons of women’s basketball to date. Including Oregon, six Pac-12 teams made Swish Appeal’s hypothetical NCAA bracket: Stanford (No. 3), UCLA (No. 5), Arizona (No. 7), Oregon State (No. 12) and Arizona State (No. 25).

The 2020-21 Ducks have 8⃣ players who stand at least 6’2″, the most in program history. #GoDucks pic.twitter.com/uzNJVRxhvX

The bad news for Oregon is that the team lost an insurmountable amount of talent to graduation: Sabrina Ionescu, Satou Sabally, Ruthy Hebard and Minyon Moore. The good news is that the Ducks landed five five-star prospects to fill the void: Sydney Parrish, Te-Hina Paopao, Kylee Watson, Maddie Scherr and Angela Dugalic. The days of Duck dominance are over (at least for the time being), but it’ll be fun to watch this young and talented group develop.

The Bruins continue to churn out WNBA draftees, but their longevity at the top of the Pac-12 hasn’t suffered; the team has won 20 or more games in five consecutive seasons under Cori Close. UCLA returns arguably the best raw talent in the Pac-12 in senior forward Michaela Onyenwere, while sophomore guard Charisma Osborne seems primed to continue the program’s recent lineage of dynamic lead guards who can score in bunches.

Just a casual afternoon at practice…

Sure, Francesca Belibi’s dunks may be the flashiest part of Stanford’s game, but the team has the talent, skill and experience to back up the hype. Kiana Williams, Lexie Hull and Haley Jones make up arguably the best guard trio in the conference, while 6-foot-4 forward Cameron Brink will debut after committing as the No. 3 overall prospect in the country.

Oh, and being led by one of the winningest head coaches of all-time can’t hurt, either.

In spite of the massive leap the Wildcats have taken under Adia Barnes, they may not have a wider Pac-12 championship window than they do in 2020-21 for quite some time. That’s because leading scorer (20.6 points per game in 2019-20), playmaker (3.6 assists) and thief (2.3 steals) Aari McDonald is now a senior and once she graduates and heads to the WNBA Barnes will have a tough time replacing her production. Until then, McDonald should be expected to continue carrying Arizona and contend for Pac-12 Player of the Year honors.

The Beavers lost their two leading scorers from 2019-20 in Mikayla Pivec (graduation) and Destiny Slocum (transfer), but there’s not much reason to believe they won’t at least remain in the middle of the pack this season. Center Taylor Jones (12.3 points, 7.3 rebounds, 1.9 blocks in 2019-20) is already one of the conference’s top post players heading into her sophomore season, while head coach Scott Rueck landed 2020’s No. 21-ranked prospect in guard Sasha Goforth.

Arizona State has been known as a slow-paced, defensive-minded team under longtime head coach Charli Turner Thorne and for the most part it’s been a successful approach. This season, though, the lack of scoring might be difficult to overcome; the Sun Devils lost each of their top three scorers — Reili Richardson, Robbi Ryan and Ja’Tavia Tapley — to graduation. A breakout scoring effort from multiple players will be needed if they’re going to finish in the top half of the conference again.

USC will be bringing in just one of the top 100 players from the 2020 recruiting class (forward Jordyn Jenkins; No. 41 overall), so any improvement it is going to show must come from within. Forward Alissa Pili (16.3 points and 8.0 rebounds per game in 2019-20) is well on her way to becoming a Pac-12 star after winning Freshman of the Year. Guard Endyia Rogers also showed flashes during her freshman campaign, averaging 13.1 points per game.

Of the teams that finished in the middle of the Pac-12 standings last season, the Utes have arguably the most potential for improvement. Most of that potential sits on the sharpshooting shoulders of Brynna Maxwell, who led the team in scoring as a freshman and shot 47.2 percent from 3-point range, rightfully earning herself a spot on the 2019-20 Pac-12 All-Freshman Team. Fellow sophomore Lola Pendande’s arrow also seems to be pointed straight up. The 6-foot-4 forward averaged 10.8 points and 5.9 rebounds last season in just 23.3 minutes of play.

Colorado hasn’t had much Pac-12 success in recent years, although they were one of just two teams (USC being the other) with a losing Pac-12 record that finished above .500 for the entirety of the 2019-20 season. All-Freshman contributor Jaylyn Sherrod was a big reason for this, though she’ll have to increase her scoring efficiency (0.88 points per scoring attempt) as a sophomore if the Buffaloes are going to improve. Meanwhile, senior Mya Hollingshed will look to finish her Colorado career strong after averaging 13.1 points and 6.9 rebounds as a junior.

Who’s going to step up for Washington? Amber Melgoza was by far the team’s top scorer last season (17.2 points per game) and with her now graduated, the Huskies will be relying on some unknown quantities. This is a situation in which incoming freshmen can establish themselves quickly. In Alexis Whitfield (No. 61) and Jayda Noble (No. 99), Washington will welcome two of the top 100 players from the 2020 class onto its roster.

The Cougars are yet another Pac-12 team that recently lost a ton of scoring to graduation (Borislava Hristova scored 18.4 points per game in 2019-20 and Chanelle Molina scored 14.6) and will be searching for someone to fill those shoes. But unlike many of its conference rivals, Washington State has no top-100 incoming freshmen. Perhaps Ula Motunga, who scored in double-figures in eight games last season, is due for a usage increase, or maybe 6-foot-5 center Bella Murekatete has improved enough from her freshman season to warrant more touches.

McDonald’s All-American…ranked No. 13 in the 2020 recruiting class by ESPN’s HoopGurlz (No. 2 post)…and now listed in @espn‘s Newcomer Impact Rankings. Freshman Dalayah Daniels is ready to light it up this season!

California won just three conference games in Charmin Smith’s first year at the helm, and after losing leading scorer Jaelyn Brown (15.1 points per game in 2019-20), it could be in for another rough go of it. Smith has reinforcements en route, though. Freshman forward Dalayah Daniels was among the highest-ranked post players in the 2020 class and she’ll be joined by fellow first-year players Ugonne Onyiah, Fatou Samb and Sela Heide. That will be a frontcourt group to keep an eye on.

*as projected by Swish Appeal; the Pac-12 has yet to announce preseason awards or a conference schedule.