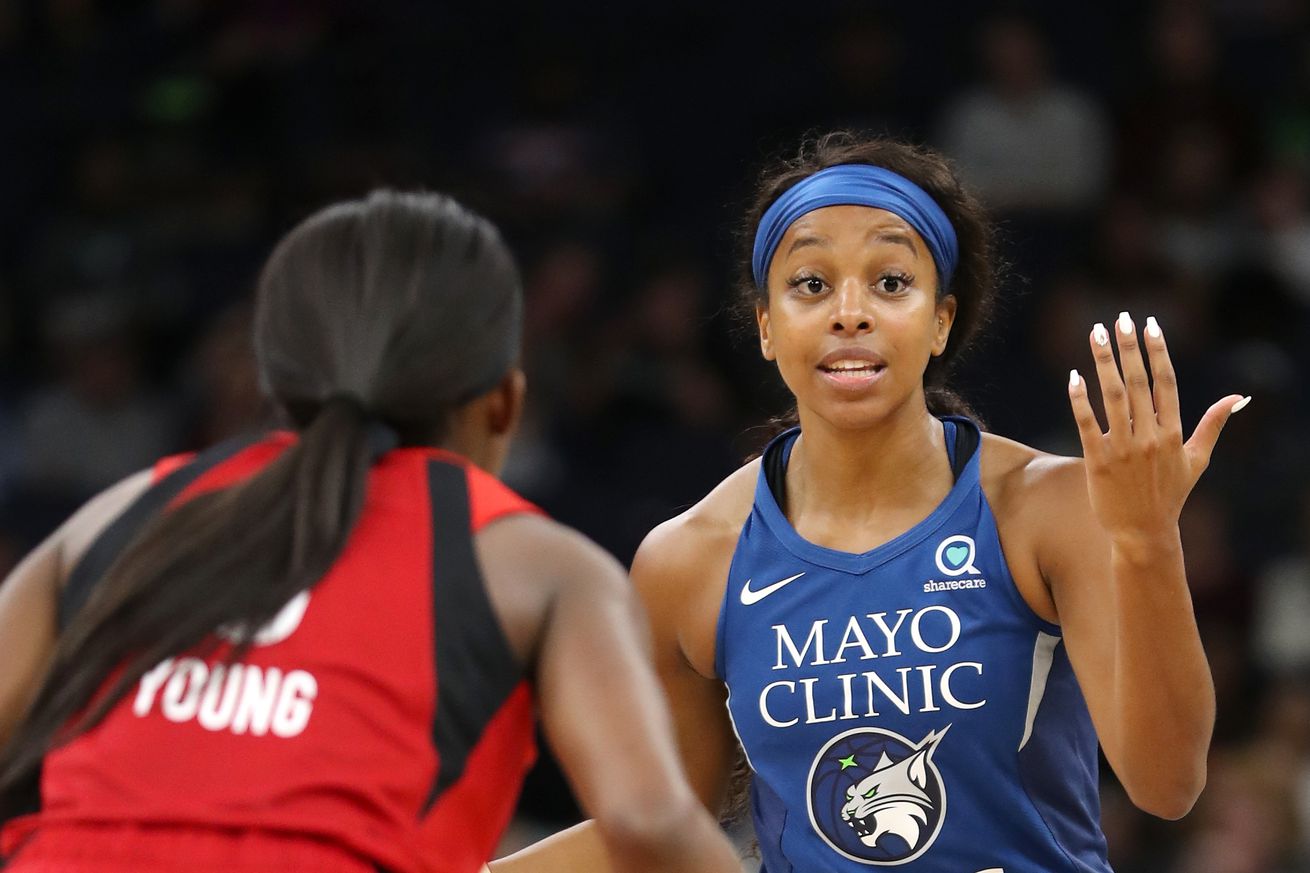 Lexie Brown (right) of the Minnesota Lynx and Jackie Young of the Las Vegas Aces have been playing solid basketball during their teams’ respective winning streaks. | Photo by Jordan Johnson/NBAE via Getty Images

Both the Las Vegas Aces and Minnesota Lynx own 6-2 records heading into Thursday’s matchup, and both have earned that success thanks to their defenses. The Aces, in particular, are one of the WNBA’s hottest teams.

The Las Vegas Aces and the Minnesota Lynx will meet for the first time this season in a Thursday night nationally-televised matchup on ESPN) Both teams currently sit at 6-2 and are comfortably in the top half of the WNBA standings.

There are few teams in the WNBA hotter than the Aces, who have won five straight games entering Thursday. Las Vegas boasts one of the toughest defenses in the league, having allowed just 96 points per 100 possessions, and combined with a fast-paced philosophy (84.06 possessions per 40 minutes), the team continues to represent the physically overwhelming brand of basketball it cut its teeth on in 2019.

The Lynx, meanwhile, have been even more stout on defense, giving up just 94.6 points per 100 possessions. It’s been that defense that has made the Lynx one of the surprises of the WNBA; they entered the season with an uncertain backcourt rotation, but have been able to lean on their defense to grind down foes.

It wouldn’t be surprising, then, to see Thursday’s big matchup end up being a low-scoring affair. “Defense first” may be a bit cliché in many basketball circles, but rest assured both the Aces and Lynx will bring it on that end of the floor in their battle for the No. 2 overall seed.

Keys to the matchup: The Liberty like to shoot 3-pointers — a ridiculous 42.8 percent of their shots have come from behind the arc — but the Fever are allowing the most points in the paint per 100 possessions at 52.3. Can New York adjust its offense accordingly? For Indiana, center Teaira McCowan’s minutes continue to fluctuate; will head coach Marianne Stanley trust her to defend the Liberty’s stretch bigs long enough to reap the rewards she produces on the other end of the court?

Highlight: Cox with the perfect feed to McCowan

Keys to the matchup: The Mystics continue to slide, now having lost their last five games. Over that span, Washington has scored the ball on just a 42.6 percent effective field goal percentage — worst in the WNBA. Making matters worse, Aerial Powers continues to miss time with an injured hamstring; the Mystics signed guard Stella Johnson after being granted an emergency hardship. We’ll see if Emma Meesseman and Tianna Hawkins can space the floor well enough for players like Ariel Atkins and Myisha Hines-Allen to get back on track. The Sparks aren’t the easiest team to score against, though, allowing 96.9 points per 100 possessions, and they now have Nneka Ogwumike back from injury, making them that much stronger on both sides of the ball.

Keys to the matchup: A’ja Wilson (21 points, 9.1 rebounds) and Sylvia Fowles (16.7 points, 11.3 rebounds) are off to hot starts for the Aces and Lynx, respectively, but we know what to expect from these elite frontcourt players. The key to this matchup may very well lie in the backcourt instead; the Lynx will be getting 2019 All-Star Odyssey Sims back, which will be a huge help for a Minnesota team that is getting just 9.7 percent of its possessions in transition (Synergy Sports). The Aces, meanwhile, get out in transition on 18.1 percent of their possessions; whichever team controls the pace of this game will be in good shape.

Highlight: Young with the smooth pump fake and finish