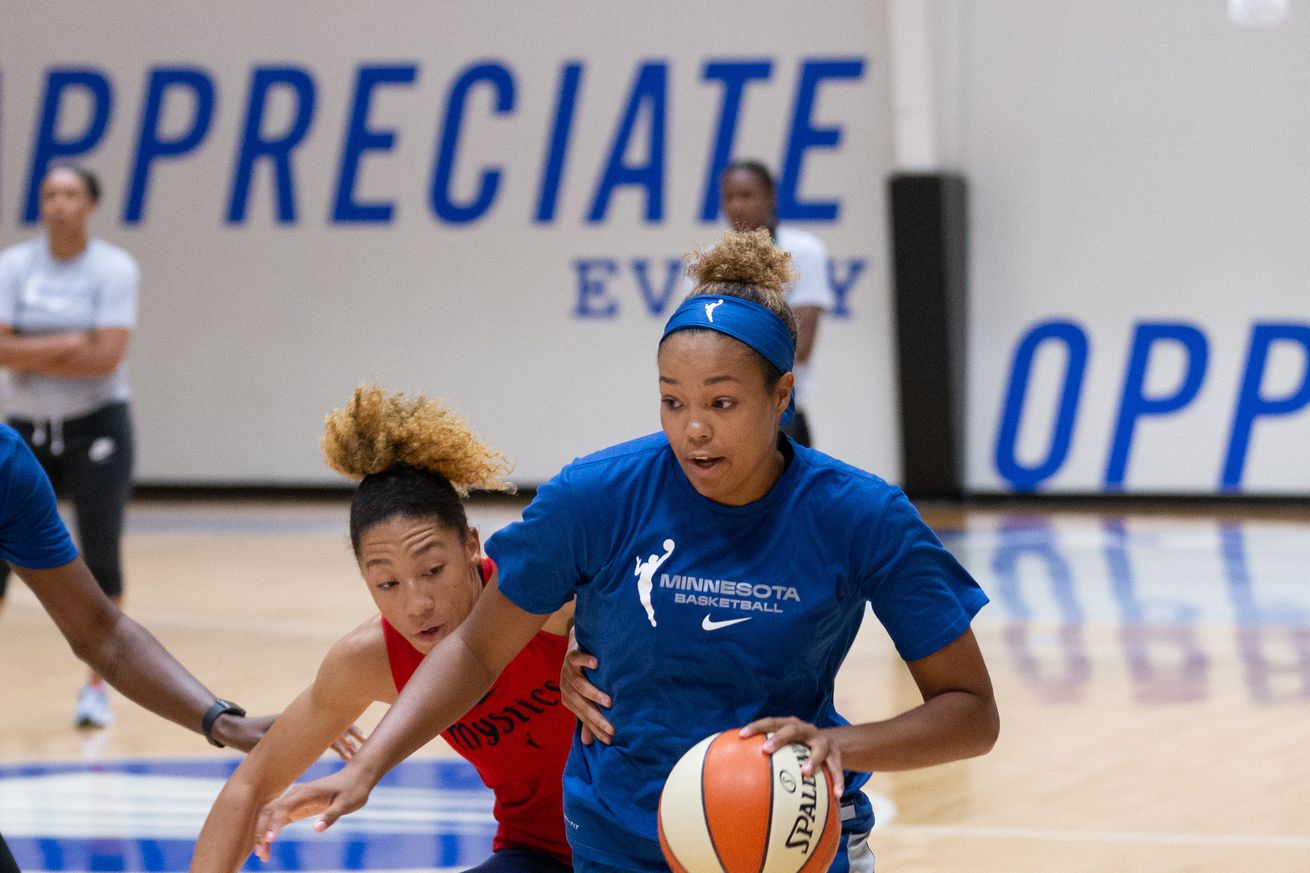 The 2019 WNBA Rookie of the Year Napheesa Collier looks to show off her progress against the Connecticut Sun. | Photo by Stephen Gosling/NBAE via Getty Images

DeWanna Bonner leads the Connecticut Sun against Napheesa Collier and the Minnesota Lynx. The Chicago Sky will take on the Cambage-less Las Vegas Aces. A pair of exciting guards, Arike Ogunbowale and Chennedy Carter, will face off as the Dallas Wings play the Atlanta Dream.

The WNBA concludes its opening weekend with three nationally televised matchups. Yesterday featured three games that were competitive early, but by the time the final buzzer sounded, the games were never in doubt.

Sunday’s first matchup will feature teams that will look quite different to long-time fans. The Connecticut Sun will be without Jonquel Jones, who is sitting out due to COVID-19 concerns. They also made a few changes in free agency, including the arrival of DeWanna Bonner. The Minnesota Lynx are again without Maya Moore, who will spend her time focusing on issues within the justice system. Additionally, long-time Lynx Seimone Augustus moved onto the Los Angeles Sparks in free agency.

The high-flying Chicago Sky bring back their core with the additions of Azurá Stevens, who came via trade from the Dallas Wings. Look for the backcourt of Allie Quigley and Courtney Vandersloot to give the Las Vegas Aces fits throughout the game. The Aces will be without All-Star center Liz Cambage, who has opted out for the season, and Kelsey Plum, who is recovering from a torn Achilles. Last year’s Sixth Woman of the Year Dearica Hamby, whose shot from half court ended the Sky’s season in last year’s playoffs, will slide into the starting lineup; newcomer Angel McCoughtry, who missed last season recovering from a left knee injury, will also start.

The Sunday finale features the Dallas Wings and the Atlanta Dream, both of whom are likely to be sitting on the outside looking in when the playoffs start. The Wings bring in an exciting crop of rookies: Satou Sabally, Tyasha Harris and Bella Alarie, with Sabally expected to be announced as a starter. Another expected starter is Arike Ogunbowale’s backcourt partner Moriah Jefferson, who missed last season due to injury. The Dream will start three new players led by rookie guard Chennedy Carter as the Dream have quickly shifted to rebuild mode after appearance in the 2018 WNBA Semifinals.

Key to the matchup: DeWanna Bonner vs. Napheesa Collier. There are a lot of storylines in this one but this on-court matchup will be quite interesting to watch. Both players can impact the game in so many ways that their individual success can fuel team success. With the changes to the roster, due to COVID-19 concerns and offseason changes, Bonner is likely to be the primary scoring option for the Sun. How she adjusts to this new role will determine the long-term success of the Sun this season. Collier was last season’s Rookie of the Year; this will be our first glimpse of her progress.

Key to the matchup: A’ja Wilson vs. the Sky’s frontcourt. Wilson has played two outstanding seasons and will be quite the handful for Chicago. Stefanie Dolson, Azurá Stevens and rookie Ruthy Hebard will need to keep her in check on the offensive end of the court while making her work on the defensive side.

Key to the matchup: Arike Ogunbowale vs. Chennedy Carter. Ogunbowale scored 630 points in her rookie season, which was the third-highest scoring rookie season in WNBA history. Carter was the most prolific scorer in this year’s draft and will undoubtedly be the No. 1 option for the Dream this year. These two should put on quite the show today.