Preview: It’s Taurasi and the Mercury vs. A’ja and the Aces 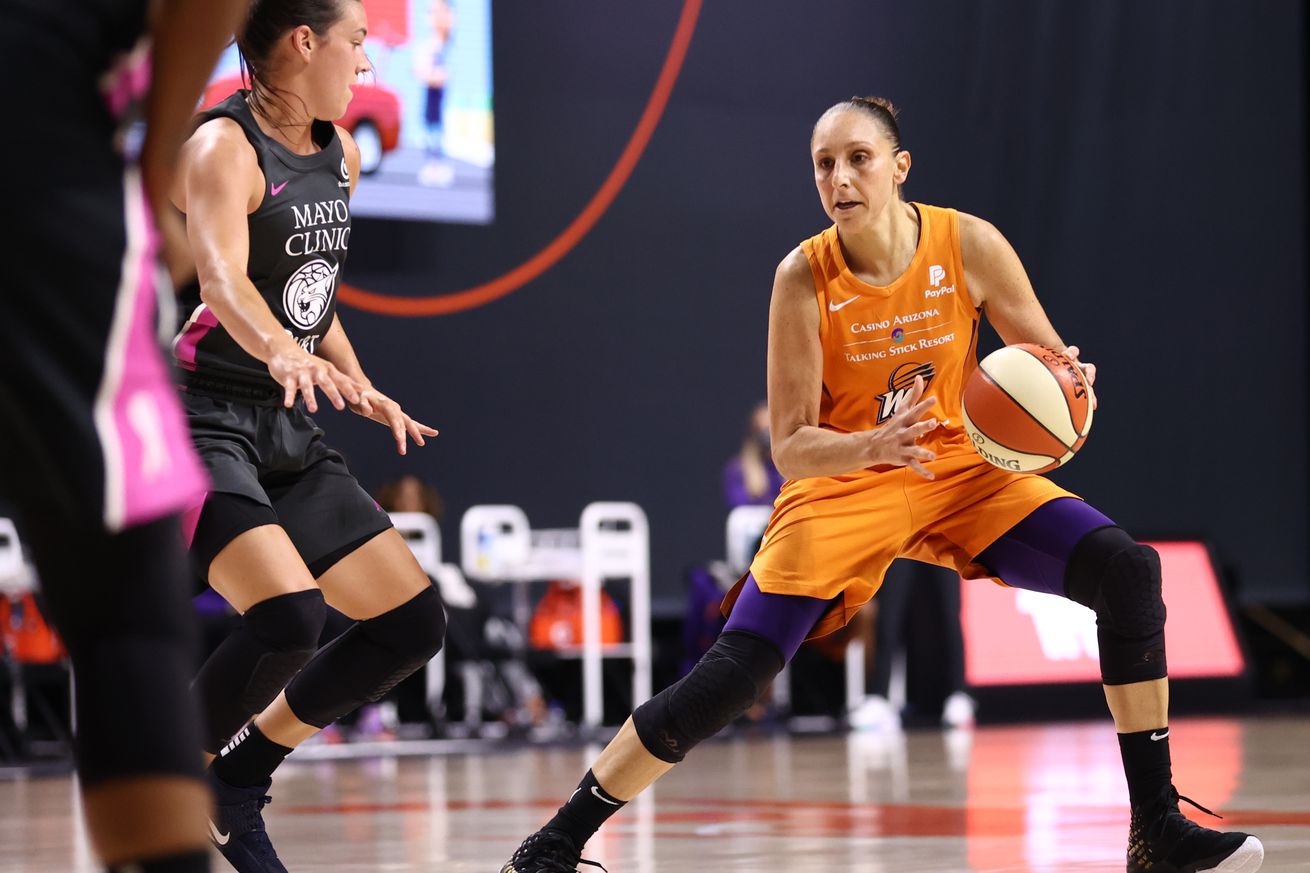 Over her last three games, Diana Taurasi has been in “White Mamba” form. She needs to play at that level, and then some, to push the Phoenix Mercury past the Las Vegas Aces. | Photo by Ned Dishman/NBAE via Getty Images

The Phoenix Mercury (9-7) gave the Las Vegas Aces (12-3) one of the their three losses in 2020. On Tuesday night, Diana Taurasi & Co. will try to hand Vegas their fourth? Before that, Player of the Week Alyssa Thomas leads the Connecticut Sun (7-9) against the New York Liberty (2-13). Rookie point guards Chennedy Carter and Julie Allemand meet when the Atlanta Dream (3-13) face the Indiana Fever (5-11).

It seems that the White Mamba has arrived in the wubble, and not a moment too soon.

Diana Taurasi and her sixth-seeded Phoenix Mercury (9-7) take on the second-seeded Las Vegas Aces (12-3) on Tuesday night (10 p.m. ET) seeking their fourth-straight win in spite of the absences of Brittney Griner (who left the bubble for personal reasons) and Bria Hartley (who is out for the season after tearing her ACL).

F A D E A W A Y #4TheValley pic.twitter.com/LLN0dUBxIO

Over much of the first half of the 2020 WNBA season, Taurasi was uncharacteristically uneven, falling short of incredibly-high, GOAT-level expectations. While she tallied some solid point totals, she was more inefficient than usual, seeming to struggle with her shot due to the lingering effects of back soreness.

However, since she donned the No. 8 Kobe Bryant jersey on the birthday of the late and legendary Black Mamba — and dropped a season-high 34 points — Taurasi has played like the White Mamba. On Saturday, she helped Phoenix secure one of their most impressive wins of the season, registering a 23-point and 12-rebound double-double to help hold off the Minnesota Lynx.

Throughout much of the season, the Mercury could not figure out the “Big Three + Bria” offensive hierarchy, with these four individual offensive talents often adding up to less than the sum of their parts. Even as each had some outstanding offensive games, the Mercury were not winning enough games.

With Griner and Hartley out, Taurasi resumes her role at the center of the Mercury’s offensive universe, shooting with renewed aggression and reinvigorated confidence. When Taurasi sits, Skylar Diggins-Smith then takes the offensive reins.

On the other end of the floor, Brianna Turner has dialed up her defensive activity in Griner’s absence. Although Griner is one of the league’s best rim protectors, Turner plays with energy and urgency that can disrupt opponents in less predictable ways. In two of the past three games, she also dominated the defensive glass, grabbing 10 and 13 defensive boards, respectively. Turner also has recorded at least three blocks in the past four games.

Yet, since the loss of Griner and Hartley, Phoenix has not played a team of Vegas’ quality. Against the Aces, Turner will have to tussle with A’ja Wilson and Dearica Hamby while Taurasi will face determined defensive resistance from the likes of Kayla McBride, Lindsay Allen, Jackie Young and Danielle Robinson.

Tuesday night’s matchup, therefore, will be a barometer of what this under-wommaned Mercury team can be — a pesky middle-of-the-pack team or a squad that truly can cause problems in the playoffs.

As we approach the backstretch of the 2020 season, might it be time for Liberty head coach Walt Hopkins to unleash and empower all of his rookies? In particular, it would seem wise to give top-10 draft picks — No. 9 Megan Walker and No. 10 Jocelyn Willoughby — extended run, as it is assumed that both are central to the organization’s future plans. While facing all that Player of the Week Alyssa Thomas and the Sun have to offer could lead to frustrations and foibles, building for the future should be New York’s top priority.

The Dream are on an upward trajectory, playing improved basketball both before and after rookie point guard Chennedy Carter returned to the lineup. Tuesday night is a prime opportunity for the Dream to reward themselves with a win, as the Fever will be on the second night of a back-to-back. However, having dropped to the ninth-seed, the Fever need to find the energy necessary to beat a team below them in the standings if they hope to remain in the playoff fight.

Key to the matchup: The Sun entered Sunday’s game shorthanded, and then Jasmine Thomas was sent to the bench with foot pain. Head coach Curt Miller called on Kaila Charles and the rookie stepped up. She scored a career-high 16 points on 60 percent shooting in a season-high 33 minutes. Even before the names on their injury report began to accumulate, the Sun had iffy depth, with Miller unable to consistently rely on his reserves. Now with half of a professional season under her belt, Charles is making a bid to assume the trusted reserve role. Against the Liberty, she should have the opportunity to strengthen her case.

After setting the franchise record for single-game reb, @AmandaZahuiB declined to answer questions due to the recent events of social injustice. She played in honor of her uncle, who was deported from Stockholm to the Ivory Coast and sends a message to pray for justice and peace. pic.twitter.com/lcAdPdUjAo

Key to the matchup: It’s a rookie point guard battle! Chennedy Carter, the No. 4 pick in the 2020 draft and an expected rookie standout, meets the surprising Julie Allemand, who is in her first WNBA season after she was selected with the 33rd pick in the 2016 draft. Like their paths to the W, their approaches to the game also differ. Carter is always aggressive, never hesitating to make the bold pass and take the difficult shot. Allemand’s aggression tends to wax and wane. Even as she is shooting nearly 47 percent from 3-point range, she does not consistently look for her own shot. The rook that establishes the right balance between eagerness and composure should put her squad in position for the win.

Thank you @wolfblitzer and @VanJones68 for having me on today! @TheWNBPA @WNBA pic.twitter.com/RDRn6LM481

How to watch: Facebook, My LVTV, Fox Sports Arizona Plus

Key to the matchup: The Mercury handed the Aces one of their three losses. In late July, against a much-different Mercury lineup than the one they will face Tuesday night, the Aces surrendered their most points of the season, allowing an opponent to reach the century mark for the only time this season. Expect a more defensively locked in Las Vegas team. Such an effort must begin on the perimeter, as shorthanded Phoenix likely will downsize with more-frequent three-guard lineups. Luckily, Vegas has one of the league’s best corps of perimeter defenders, with the foursome of Kayla McBride, Lindsay Allen, Jackie Young and Danielle Robinson all capable of outstanding defensive efforts.

Interview: The Mercury’s Kia Vaughn speaks about the activism of WNBA players

“Us as a whole, the @WNBA, I’m very proud of us. I’m proud to be a part of this league. We just have to continue to use our platform.”