Preview: Lynx hope to pull out the brooms vs. the Sky, retain control of fourth place

By Zachary Ward on Wednesday, September 2, 2020 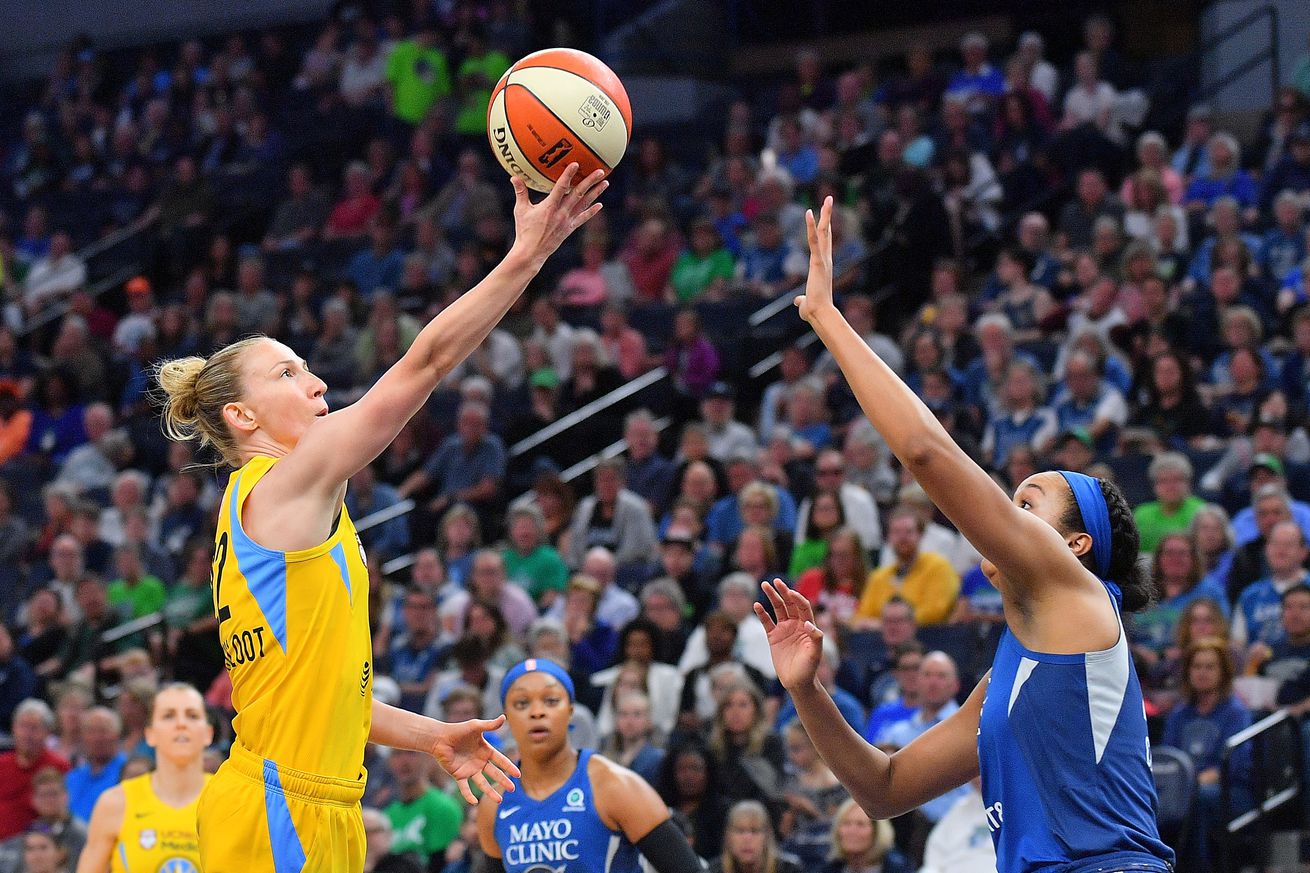 Courtney Vandersloot (left) goes up for a shot against Napheesa Collier in May 2019. | Photo by Sam Wasson/Getty Images

Napheesa Collier and the 11-5 Minnesota Lynx face Courtney Vandersloot and the 11-6 Chicago Sky on Wednesday with fourth place in the standings up for grabs. Plus, a rematch between the 12-4 Los Angeles Sparks and 6-10 Dallas Wings and tilt between the 13-3 Seattle Storm and 4-11 Washington Mystics.

The Minnesota Lynx defeated the Chicago Sky by just two points in a nail-biter on July 30. On Wednesday, they hope to win a little more comfortably. But whether a nail-biter or blowout, a victory would mean a 2-0 sweep of the Sky, the head-to-head tiebreaker and a 1.5-game lead in the No. 4 spot of the WNBA standings.

Both teams are coming off blowout wins.

Courtney Vandersloot’s historic 18-assist performance led the Sky to a 100-77 victory over the Indiana Fever on Monday, while the Lynx surprisingly dominated a favored Los Angeles Sparks team the same night. Sylvia Fowles (calf) being out for Minnesota made that win even more impressive.

Fowles will be out again tonight and so will the Sky’s Azurá Stevens, who is done for the season with a knee injury, and Diamond DeShields, who left the bubble at IMG Academy for personal reasons. Even without Stevens, Stefanie Dolson (6’5”) and Cheyenne Parker (6’4”) will have the size advantage in the post over Damiris Dantas (6’3”) and Napheesa Collier (6’1”). That doesn’t equate to a talent advantage, however, considering how well Collier has been playing.

In the backcourt, Rookie of the Year candidate Crystal Dangerfield has the tough task of going against an aggressive defender in Vandersloot. It will be interesting to see if her scoring can outdo Vandersloot’s distributing.

The Sky have an advantage — four players who average double-figure scoring compared to three for the Lynx. To get a win, Minnesota should look to contain Sixth Woman of the Year candidate Kahleah Copper (15.7 points per game) and Allie Quigley (15.3), but Vandersloot and Parker can put the ball in the basketball as well. For the Lynx there is a big drop off in scoring after Collier and Dangerfield who average 16.4 points and 15.9 points, respectively.

Arike Ogunbowale will be a game-time decision for this one and it will be hard for Dallas to win without her, even with Los Angeles star forward Nneka Ogwumike ruled out with a back injury. The Wings nearly beat the Sparks back on Aug. 23, have since given the Las Vegas Aces a run for their money and defeated the Indiana Fever.

The Storm have cooled off since their 105-64 dismantling of the New York Liberty on Aug. 18, but the 2018 champions are still the most talented team in the league. Meanwhile, the Mystics, who came into the season missing star players, are even worse off now without Aerial Powers (hip), who contributed to the Mystics’ win over the Storm on July 30.

How to watch: Facebook, The U and FOX Sports North PLUS

Key to the matchup: 3-point shooting. The Sky shoot a far better percentage from the field (49.4 to 44.5), but the Lynx have a very slight edge in 3-point percentage (36.1 to 36.0). If Minnesota can get hot from downtown it may be able to swing things in its favor. Crystal Dangerfield and Damiris Dantas, who make the most threes for the Lynx, while be tasked with leading the team to this goal, while Bridget Carleton, Napheesa Collier and 3-point specialist Rachel Banham need to get involved as well. Minnesota also has the advantage over Chicago in opponent’s 3-point percentage (32.4 to 34.5).

Highlights: Rachel Banham at her best from distance

How to watch: CBS Sports Network and Spectrum SportsNet

Key to the matchup: Ball security. The Sparks are the best team in the league at creating turnovers (18.2 per game), while the Wings turn the ball over the least (11.4 times per contest). If Dallas wins that battle of strength on strength they may be able to overcome Los Angeles’ far superior shooting percentages (48.1 to 41.2 from the field and 40.1 to 32.9 from distance).

Highlights: Chelsea Gray is the top theft for the Los Angeles Sparks

Key to the matchup: Breanna Stewart’s supporting cast. The last time these two teams played, Stewart had 15 points, but only received 11 combined from her co-pilots Natasha Howard and Jewell Loyd. Sami Whitcomb was the team’s second leading scorer with 11. When Stewart, Howard and Loyd are clicking on all cylinders Seattle is hard to beat and it will be especially difficult for Washington’s offense to keep up without Aerial Powers as well as the stars who never traveled to the bubble.

Highlights: The Gold Mamba at her best