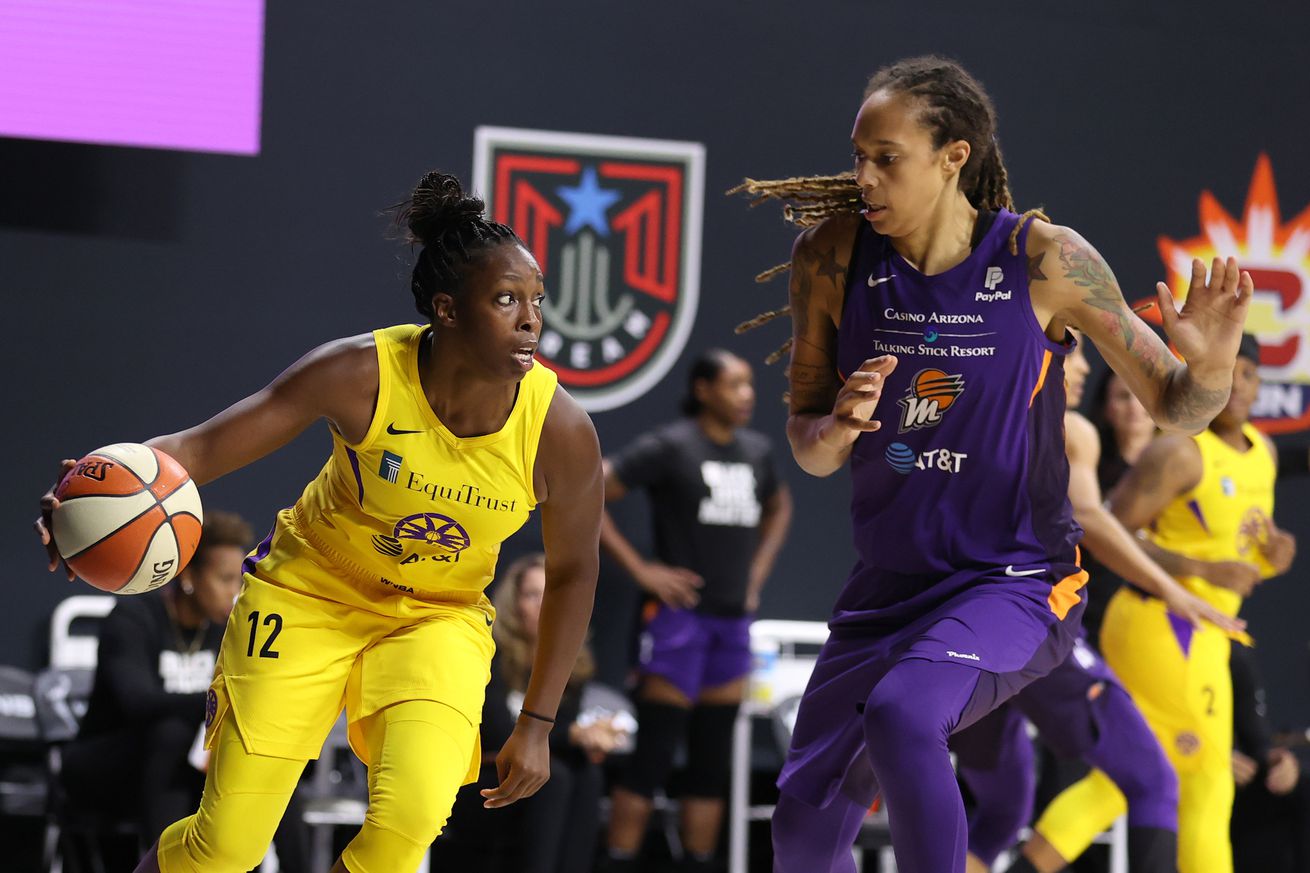 Chelsea Gray sizes up Brittney Griner during the Sparks’ season-opening win over the Mercury. | Photo by Stephen Gosling/NBAE via Getty Images

Wednesday night’s WNBA headliner sees two Western Conference squads — the Phoenix Mercury (6-5) and Los Angeles Sparks (7-3) — do battle. Before that, the Atlanta Dream (2-9) and Washington Mystics (3-7) try to end their losing streaks, while the Dallas Wings (4-7) look to sustain flight against the Minnesota Lynx (7-3).

On the opening day of the 2020 season, two traditional titans of the WNBA’s Western Conference — the Los Angeles Sparks (7-3) and Phoenix Mercury (6-5) — met in a Saturday afternoon matinee matchup. However, the contest did not turn into a titanic tussle, with the gals from Hollywood instead cruising to an easy, undramatic victory, 99-76.

On Wednesday night at 10:00 p.m. ET, they meet for the second and final time this regular season.

In order to reverse the result of the first matchup, the Mercury must make two big changes. First, they have to take care of the ball, as their 27 turnovers juiced an already potent Sparks’ transition attack. As the season has progressed, Phoenix has cut down their turnovers, suggesting their opening day slipperiness was due to a lack of familiarity.

The Mercury’s second needed change also should be correctable — get Brittney Griner more involved. On opening day, Griner was brutal, unable to overcome early foul trouble as she scored a season-low eights points. Sunday, Griner flashed her dominance for the first time this season, taking it to the Dallas Wings’ undersized and experienced interior defenders to score a season-high 29 points on 70-percent shooting.

She must bring this same mindset against the Sparks, especially as she will encounter much stronger, more sophisticated defensive resistance. Despite Griner’s physical advantages, Nneka Ogumike has the smarts and savvy required to trouble BG. Candace Parker’s defense also has been on point this season, suggesting she will not hesitate to challenge Griner.

If Griner does not get going, Phoenix will need big-time shotmaking and playmaking from their guard trio of Diana Taurasi (who is questionable), Skylar Diggins-Smith and Bria Hartley. Since the three all rank in the top 10 in points and assists per game, they are more than capable of carrying the Mercury to a win.

Only 3 @WNBA players currently rank in the top-10 in both points and assists per game this season.

However, the Sparks have a couple of advantages they can call on. First, their “Big Three” of Parker, Ogwumike and Chelsea Gray has been rock solid this season. Second, continuing a trend that began with their opening day contest against Phoenix, LA has gotten excellent production from their bench. Of late, Riquna Williams has been on fire. Throughout the season, Seimone Augustus has had her stroke working. Rookie Te’a Cooper also has served as an off-the-bench spark.

If the Sparks sprint to another win over their longtime Western Conference foes, they can solidify themselves as legitimate championship contenders. If the Mercury get the victory, they can begin to answer concerns about their playoff viability.

Both of these struggling squads likely are happy to see a fellow struggler on the schedule. The Dream will aim to end their eight-game losing streak while the Mystics seek to escape their seven-game slide. The winner also should hope to establish some positive momentum, allowing them to enter the second-half of the season with a sense of optimism.

Arike Ogunbowale put on an explosive offensive exhibition on Sunday, leading the Wings to their most impressive win of the season. Even without their anchor in Sylvia Fowles, expect the defensive-minded Lynx, directed by head coach Cheryl Reeve, to make things more difficult for Ogunbowale.

Key to the matchup: With Chennedy Carter sidelined, the Dream have struggled to generate consistent offense. Although they have shown flashes of some beautiful ball movement, they too frequently have stagnated in the half court, relying on hero-ball shots from Courtney Williams or Betnijah Laney. Dialing up some plays for Kalani Brown could give the Dream another option. Brown has the potential to be the potent offensive big that Atlanta has lacked. Against the undersized Mystics, she could feast. While her bout with COVID-19 and its after effects explains her limited playing time, extending Brown’s run (as long as she is ready) could help the Dream find some sustainable positives during this Carter-less time.

Key to the matchup: This season, Dallas head coach Brian Agler constantly has shuffled his starting lineups, starting a league-high 10 different players. Might the play of Marina Mabrey help Agler begin to settle on a more stable rotation? Sunday, in the first start of her career, she poured in a career-high 17 points, rekindling that Fighting Irish camaraderie with Arike Ogunbowale. Before that, she was plus-three in 31 minutes of action against the Seattle. Although less heralded than many of her teammates, Mabrey could establish herself as a valuable glue gal.

This ⁦⁦@ndwbb⁩ duo was GREAT today. ⁦@Arike_O⁩ with 33 points and in her first career start for ⁦@DallasWings⁩ ⁦@mmabrey1⁩ had a career high 17 in a HUGE win over Phoenix. #bestfriends @wnba pic.twitter.com/DAEgrSFOkH

How to watch: Twitter, Fox Sports Arizona Plus, Spectrum Sportsnet

Key to the matchup: As noted above, the Sparks have received reliable contributions from their reserves. Outside of Bria Hartley, the Mercury’s bench players have been uneven, as epitomized by Shatori Walker-Kimbrough. Primarily coming off the bench, Walker-Kimbrough has been both spectacular and subpar. Seventeen- and 20-point performances on stellar shooting have been balanced by several scoreless duds. Varied minutes might explain Walker-Kimbrough’s up-and-down play. However, for the Mercury to reach their potential, they need her to become more consistent, regardless of the number of minutes she receives.

Highlight: SWK shows off the 3-point stroke that carried her to a career high