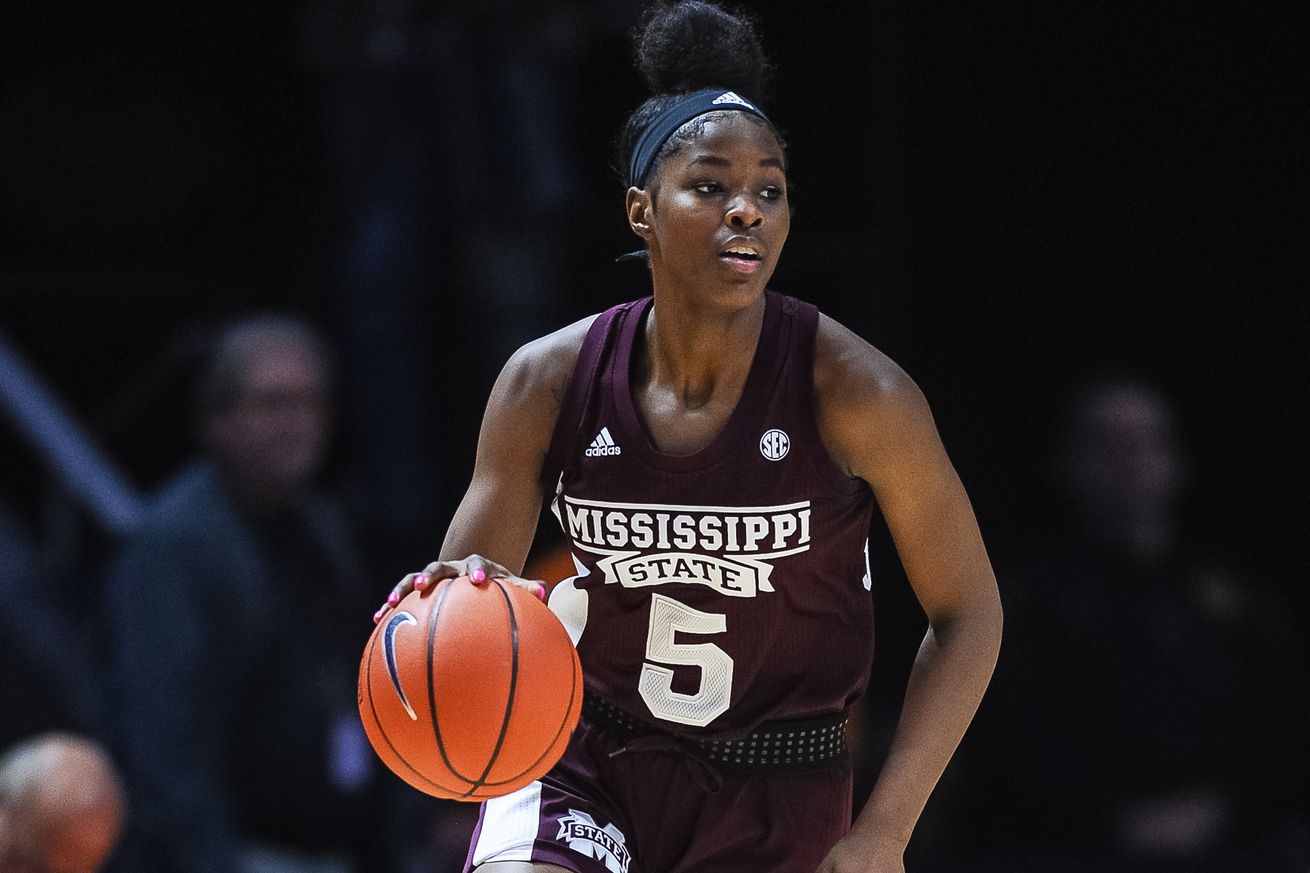 Rickea Jackson and the Mississippi State Bulldogs will aim to maintain their momentum against the Texas A&M Aggies. | Photo by Bryan Lynn/Icon Sportswire via Getty Images

Sunday’s SEC slate features two top-25 battles, with No. 8 Mississippi State meeting No. 16 Texas A&M and No. 15 Kentucky facing No. 25 Arkansas. Wins would not only allow the Bulldogs and Wildcats to retain their spots near the top of the conference standings, but also remain in contention for the SEC championship.

The No. 1 South Carolina Gamecocks (22-1, 10-0) have impressed as they have romped through their conference schedule, showing that their aspirations should exceed a SEC title.

However, the teams that sit second and third in the conference standings would protest that the Gamecocks’ dominant destiny is predetermined. On Sunday, the No. 8 Mississippi State Bulldogs (21-3, 9-1) and No. 15 Kentucky Wildcats (18-4, 7-3) can prove that they remain threats to claim the conference championship. Mississippi State welcomes the No. 16 Texas A&M Aggies (18-4, 6-3) to Starkville (1 p.m ET, ESPN) and Kentucky takes on the No. 25 Arkansas Razorbacks (18-5, 6-4) in Fayetteville (4 p.m. ET, ESPN2).

Thursday night, Mississippi State might have secured its best win of the season so far, taking it to the No. 23 Tennessee Lady Vols on Rocky Top, 72-55. The Bulldogs’ win was driven by their defensive intensity, as they grabbed 14 steals and forced the Lady Vols into a total of 23 turnovers.

Such determined defense allowed the Bulldogs to overcome uneven offense, as both Rickea Jackson and Jordan Danberry struggled to get their shots to fall. Head coach Vic Shafer thus turned to his bench for additional contributions: Yemiyah Morris, in particular, stepped up with 11 points and 6 rebounds in a season-high 22 minutes. With a similar spirit, the Bulldogs can seal their sixth-straight win on Sunday.

Even though Chennedy Carter remains sidelined with an ankle injury, the Aggies will not go down easily. As Swish Appeal’s Zack Ward recently highlighted, N’dea Jones is not only a strong rebounder, but has lately become a double-double machine, putting up over 20 points in several recent games to go along with her usual dominance on the glass. Last Sunday, Jones and the Aggies did not quite have enough, falling to the LSU Tigers, 59-58, However, Aaliyah Wilson and Kayla Wells both turned in strong performances, suggesting that they could give the Bulldogs trouble on Sunday.

"I think it definitely shows the growth of our team."

An injury to Rhyne Howard has threatened the Kentucky Wildcats’ quest to remain near the top of the conference table. The scoring dynamo is expected out until mid-February after fracturing a finger during Kentucky’s Jan. 27 win over Auburn. The Wildcats have gone 2-1 without Howard, with victories over the Missouri Tigers and Alabama Crimson Tide sandwiching a loss to the Florida Gators. To defeat the Tide, the Cats dialed up their defense, turning 17 Bama turnovers into 21 points. Conversely, Kentucky did not cough up the ball, registering only six turnovers for the game. This possession advantage was aided by some timely 3-point shooting from Sabrina Haines, allowing the Wildcats to escape with the 66-62 home win.

Such ball control and sharp shooting will be necessary when Kentucky faces its toughest Howard-less test on Sunday.

The Arkansas Razorbacks should enter this contest highly motivated for multiple reasons. First, Arkansas experienced South Carolina’s excellence on Thursday evening, losing by more than 20 points on its home court. Because a second straight loss would jeopardize the Razorbacks’ precarious place in the top 25, the importance of a bounce-back victory is exacerbated. Alternatively, a win would give the Hogs their first win over a ranked team this season, and likely allow them to maintain their ranking.

To do so, Arkansas must do what it does best — score the basketball. While defense often is touted as the key to success, the Razorbacks possess the firepower needed to outgun opponents. The trio of Chelsea Dungee, Alexis Tolefree and Amber Ramirez all have the potential to go off. In a comeback overtime 85-81 victory over Missouri last Sunday, Tolefree displayed her offensive potency, scoring a career-high 35 points from all over the floor. Ramirez contributed an also-impressive 24 points. Although Dungee has struggled with her scoring efficiency of late, her willingness to keep firing away means she still will demand the attention of the Kentucky defense.

NCAAW Season Recap: Nikki McCray guided the rise of the No. 44 ODU Monarchs