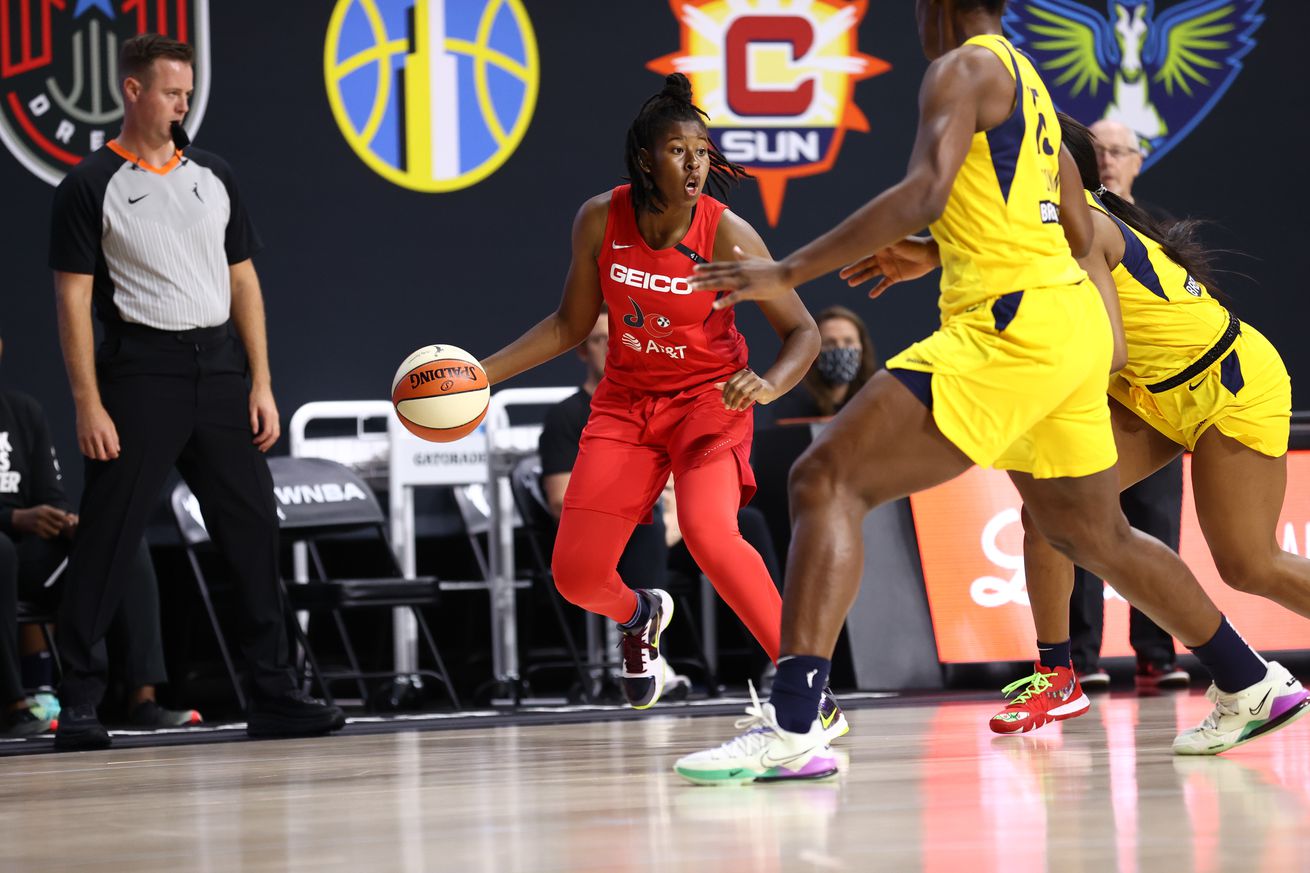 Ariel Atkins (left) scored 22 points in the Mystics’ win over the Seattle Storm. | Photo by Ned Dishman/NBAE via Getty Images

The Washington Mystics have looked outstanding through three games and will look continue their performance against the Chicago Sky. The Connecticut Sun look for their first win against the Minnesota Lynx. The Seattle Storm look to get back on track against the Los Angeles Sparks.

The Washington Mystics have looked dominant and through three games are easily the best team in the WNBA. The Chicago Sky, prior to their defeat at the hands of the Minnesota Lynx, had two impressive wins over the Las Vegas Aces and the Los Angeles Sparks.

The Mystics made 15 3-pointers in their shocking blowout win of the Seattle Storm, although it was not a great shooting game for the team as they shot just 43.4 percent for the game. The Mystics have proven to be a team with multiple scoring threats, with three different team scoring leaders in each of their three wins and four players averaging double-figures in scoring.

The Sky can get scoring from any position, as the starting five of their last two games are averaging double-figures. The addition of Azurá Stevens has so far proven to give the Sky the extra versatility that they needed to take the next step and challenge some of the more proven teams in the league.

The Mystics’ tenacious defense will be the toughest the Sky have seen this season, especially from beyond the arc, where the Mystics are holding teams to 29 percent shooting. The Mystics’ net rating of 18.4 is a non-reliable stat in large part due to a small sample size but is an indicator of just how dominant this team will be going forward. The Sky will have their hands full in this one.

The Lynx won a close one against the Sky after nearly blowing a 12-point lead. The Lynx beat the Sun to open the season but dropped their second game against the Storm. The Lynx have proven to be a frontcourt-dominant team with Sylvia Fowles, Napheesa Collier and Damaris Dantas leading in team scoring. Dantas is averaging a career-high 13.7 points and shooting 45.5 percent from deep.

The Sun have not found a the taste of success through three games, despite DeWanna Bonner sliding comfortably into the role of primary option. Bonner has averaged 27.3 points to start the season with Alyssa Thomas second on the team with 19.3 points. Both teams average in the mid-70s in scoring and are allowing 80 or more points defensively. The Sun controlled their first meeting, but a dismal fourth quarter gave Minnesota the win.

The Sparks are coming off an easy win over the Sun, but before that, they were blown out by the Sky. The Sparks ran into a buzzsaw of an offense that shot 54.4 percent. One area the Sparks need to improve — either through emphasis or adding a player — is rebounding. They have been out-rebounded in every game, surrendering double-digit offensive rebounds.

The Storm opened the season with two big victories but were easily beaten by the Mystics in their last game. The Storm shot 39.4 percent and allowed 15 made 3-point shots in the 18-point loss. Breanna Stewart has looked great since coming back from her injury. With Sue Bird resting, look for Jordin Canada to get the start. Canada was Bird’s replacement last year as Bird dealt with injuries throughout the season.

Key to the matchup: The rest of the Sun. DeWanna Bonner and Alyssa Thomas are the offense for the Sun, with no other player averaging more than eight points. A third scoring option needs step up if the Sun are going to have any shot at salvaging their season.

Interview: Rookie Crystal Dangerfield talks about her experience so far in the WNBA

Key to the matchup: The Mystics’ frontcourt vs. the Sky’s frontcourt. Ariel Atkins, Emma Meesseman and Myisha Hines-Allen have proven to be all-around players, scoring at will and being very stout defensively. The question for the Sky will be on the defensive end of the floor. Kahleah Copper, Cheyenne Parker and Azurá Stevens will need to be on top of their respective games defensively if the Sky want to upset the Mystics.

Highlights: Ariel Atkins scored 22 points in the Mystics 89-71 win over the Storm

Key to the matchup: Natasha Howard vs. Nneka Ogwumike. Howard has blossomed into a lethal offensive threat while continuing to be a dominant presence on the defensive end. Ogwumike leads the Sparks in scoring and will be tasked with keeping Howard in check. Given the Sparks’ rebounding woes, this will be a matchup to keep an eye on throughout the game.

Sparks injury report: Marie Gülich (out, ankle); Kristine Anigwe (expected to be available after dealing with an illness).

Highlights: Chelsea Gray was the key to victory over the Connecticut Sun

The #PointGAWDDDDD was activated last night