Preview: Mystics’ path to the playoffs runs through the Lynx 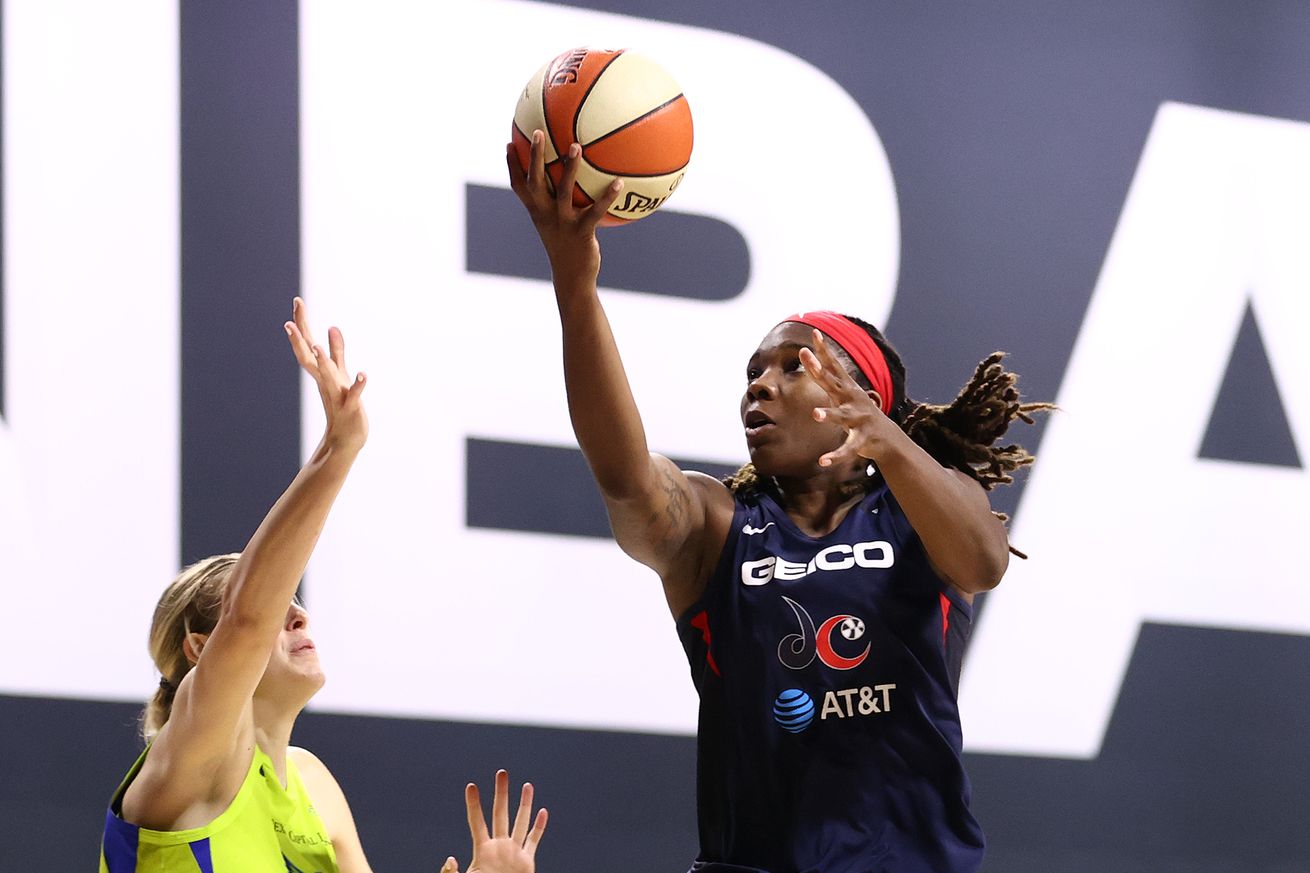 Myisha Hines-Allen (with ball) has become the Mystics’ best player in 2020. | Photo by Ned Dishman/NBAE via Getty Images

The defending champion Washington Mystics (5-13) are clinging to slight hope of making the playoffs against a very good defensive team in the 13-6 Minnesota Lynx on Tuesday. Plus, the 14-5 Los Angeles Sparks hope to cruise past the 2-16 New York Liberty and the 14-4 Las Vegas Aces seek to dominate the 5-14 Indiana Fever.

The Washington Mystics know they have little room for error as they face the Minnesota Lynx tonight at 8 p.m. ET. They want to avoid falling two games behind the Dallas Wings in the battle for the eighth and final playoff spot with three games to go for both teams after today.

The Mystics’ most recent loss came at the hands of the Wings in heartbreaking fashion. They went up three with 6.8 seconds remaining but Dallas’ star scorer Arike Ogunbowale made a 3-pointer to force overtime and then Dallas pulled away in OT. Washington has been swept by Dallas this year and both games went to overtime.

Meanwhile, Minnesota is 1.5 games behind the second-place Las Vegas Aces and 1.5 games ahead of the Phoenix Mercury so, in all likelihood, they will end up with a No. 3 or No. 4 seed. However, the Lynx are still mathematically in the running for second place and a double-bye. On the other hand, they can’t fall any lower than fifth, but the Phoenix Mercury could take away fourth place and a first-round bye.

Lynx head coach Cheryl Reeve has said that star center Sylvia Fowles, who is dealing with a calf injury, will not play again before the playoffs begin. Fowles is the Lynx’s best player but they have been getting by without her thanks to the phenomenal play of Napheesa Collier, Crystal Dangerfield and Damiris Dantas. Dangerfield will be looking to wrap up her first WNBA campaign on a high note and is the favorite to win Rookie of the Year.

The Mystics have struggled all season since starting 3-0 and have been without many key players, but Myisha Hines-Allen has been a bright spot. The third-year forward out of Louisville leads the team in points (15.4) and rebounds (8.7) per game and is in the running for Most Improved Player.

Candace Parker has averaged 23.7 points, 10.7 rebounds and 4.7 assists over the past three games for the Sparks, who bounced back from Jewell Loyd’s dagger on Sept. 4 with an 86-80 win over the Chicago Sky on Sunday. The Sparks have yet to beat either of the two teams ahead of them in the Seattle Storm and Las Vegas Aces, but right now they just have to take care of business against the Liberty, who have lost four in a row.

Las Vegas Aces play the Indiana Fever with hopes of holding steady at No. 2

Vegas’ A’ja Wilson continues to make her case for MVP and is arguably the front-runner. She has scored in double figures in every game this season and had 21 points and eight rebounds in her most recent outing. She and the Aces will try to stay ahead of the Sparks with a win against an Indiana team that needs to win the rest of its games to have a chance at making the playoffs.

Key to the matchup: New York’s ability to adjust during the game. Percentage-wise this is a battle between the best 3-point shooting team in the league, the Sparks (41.5), and the worst in the Liberty (27.5). New York takes 27.7 threes per game and LA takes just 18. Can the Liberty find other ways to score if their long-distance shots aren’t falling? They are the second-best free throw shooting team in the league and the Sparks are 10th in that category. New York should mix in some more driving to the basket to create contact and take advantage of that strength.

Highlights: Sparks can get hot from deep

Key to the matchup: Minnesota’s perimeter defense. The Lynx defense held the Mystics to just 48 points in their first meeting this season. Washington has the second-worst scoring offense in the league with 79.5 points per game, but it did put up 32 points in the first quarter of a win over the Chicago Sky on Sept. 4, the most in any frame for the team since its opening quarter of the season when it dropped 36 on the Indiana Fever. Mystics head coach Mike Thibault credited having good shooting forwards in Myisha Hines-Allen and Emma Meesseman for his team’s success in that first quarter against Chicago. That was going against Stefanie Dolson and Cheyenne Parker though. Lynx forwards Napheesa Collier and Damiris Dantas are better perimeter defenders and if they can take care of business the Lynx should be able to come away with the victory.

Highlights: The Lynx will try to prevent Myisha Hines-Allen from doing the following

Key to the matchup: Indiana’s fouling issue. The Fever send teams to the line more frequently than anybody else in the league. They allow an average of 21.8 free throw attempts per game. This weakness could be exacerbated when they go up against the Aces, who love pounding the ball into the paint and getting opportunities at the free throw line. Las Vegas is also the best free throw shooting team in the league at 82.3 percent. So the Aces will make the Fever pay if they can’t defend without fouling.

Highlights: Vegas’ A’ja Wilson and Angel McCoughtry are two of the most aggressive offensive players in the WNBA