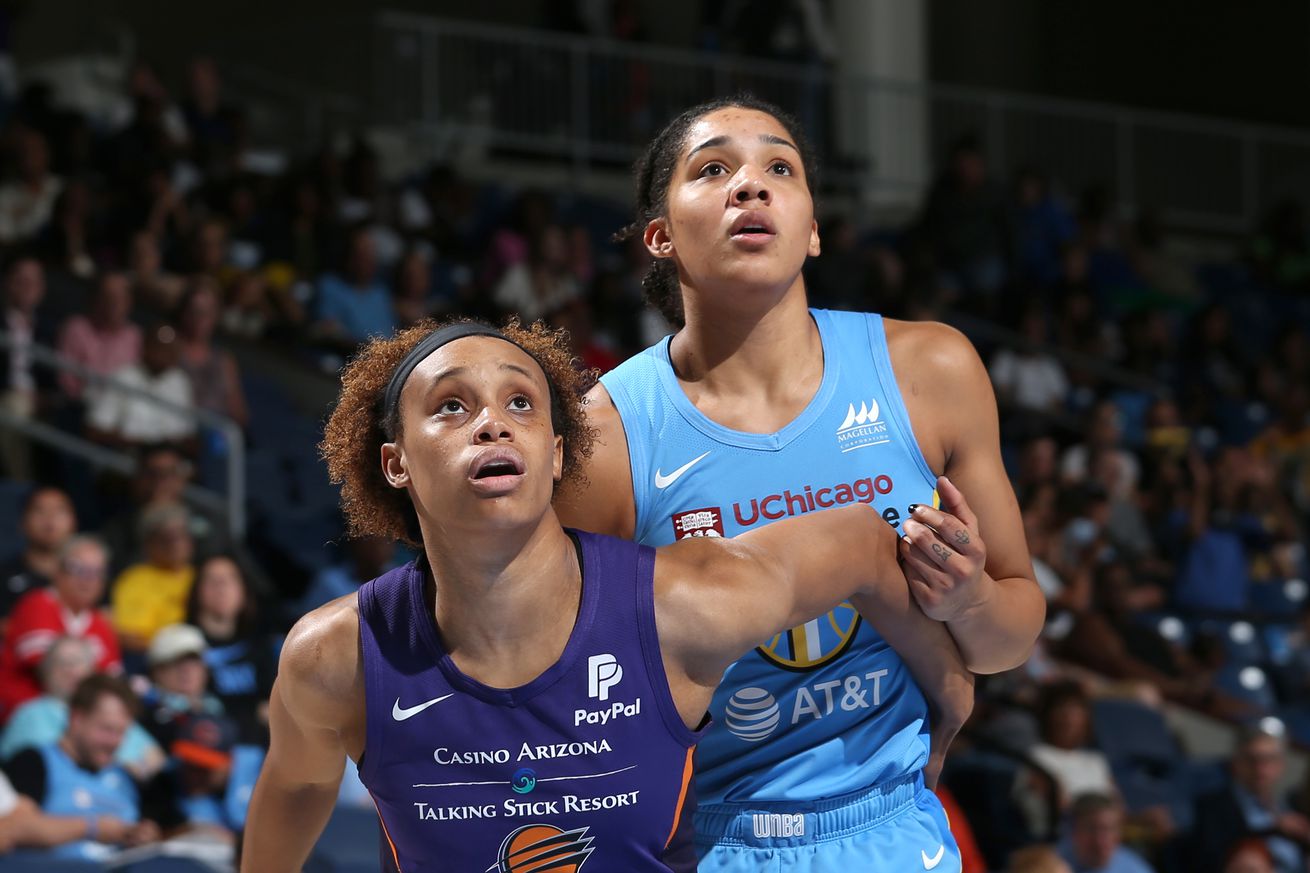 It was all Chicago in last postseason’s Sky-Mercury matchup. Can the return of Diana Taurasi help Phoenix exact revenge in 2020? | Photo by Gary Dineen/NBAE via Getty Images

The Chicago Sky are off to a 4-1 start and next face the Phoenix Mercury, whom they blew out in the 2019 postseason. This Mercury team looks considerably different than last year’s, though — Phoenix added Skylar Diggins-Smith and returns one of the all-time greats in Diana Taurasi.

Thursday night’s WNBA action will be highlighted by a 2019 postseason rematch when the Chicago Sky take on the Phoenix Mercury.

Last season, the matchup was fairly one-sided. Chicago went 3-0 against Phoenix in the regular season, winning by an average margin of 14 points per game, then booted the Mercury from the playoffs in a 105-76 victory.

2019, however, might as well be a decade ago, especially for a Mercury team that was seriously revamped heading into 2020. Diana Taurasi and Brittney Griner remain the team’s mainstays, but Skylar Diggins-Smith has been added to the mix, alongside bench pieces such as Bria Hartley, Nia Coffey and Shatori Walker-Kimbrough.

The Mercury sit at 3-2 five games into the season and appear to be on the upswing after losing their first two contests. While the team is still seeking consistent production from the small forward position and a full 40 minutes of effort from its defense, it’s beaten the opponents it’s supposed to (New York and Atlanta, most recently) and Taurasi looks healthy — a major upgrade from the hobbled, injury-ridden iteration of last season.

Meanwhile, the Sky have taken the leap many expected of them, currently tied for first place with the Seattle Storm (4-1). Injuries to Stefanie Dolson and Diamond DeShields have slowed Chicago’s offense a bit, but the addition of Azurá Stevens in the offseason — as well as the improvement of Kahleah Copper and Gabby Williams — have more than offset any nagging health problems.

It will be an interesting matchup, then, between a team that went all-in for 2020 and one that is on the rise thanks to in-house development. Catch it Thursday night on ESPN2.

Keys to the matchup: The Storm have been without Sue Bird (bone bruise) for the past two games, but that hasn’t impacted their defense; they’re currently allowing 93.8 points per 100 possessions, which is the second-best defensive efficiency in the WNBA. It will be a big-time test for Dream rookie Chennedy Carter, who scored 26 points on 11-of-21 shooting in her previous game.

Keys to the matchup: Can the Sun maintain their energy throughout the entire game? Connecticut has fared well in first halves this season, posting a Net Rating of 7.0, but second halves have been a disaster; the Sun have been outscored by 28.2 points per 100 possessions in those frames. Connecticut will also have to rotate and recover sharply on defense against a Wings team that attempts 36.1 percent of its shots from 3-point range. As simple as it sounds, this game could just come down to how many open shots Dallas makes.

Keys to the matchup: Last season the Mercury were unable to keep up with the Sky, who used a relentless transition game to run Phoenix off the floor. That’s still a significant part of Chicago’s game, so rebounding the basketball and controlling the pace of the game will be crucial for Phoenix. The Mercury will also, of course, have Diana Taurasi back, which is more or less an automatic upgrade over their 2019 backcourt.