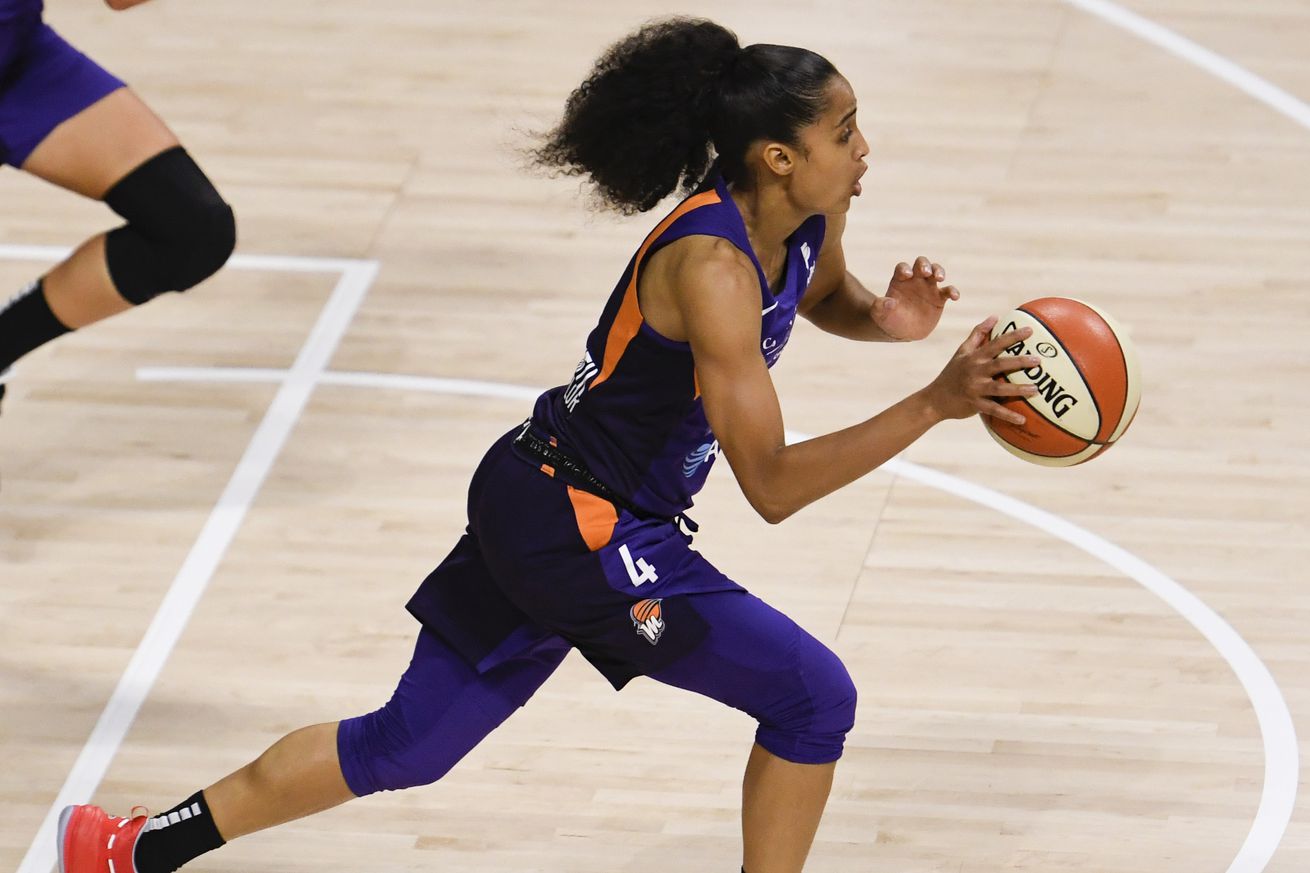 Skylar Diggins-Smith streaks up the floor during the Phoenix Mercury’s Monday night win over the Dallas Wings. | Photo by Douglas P. DeFelice/Getty Images

Wednesday night’s meeting between the Phoenix Mercury (5-3) and Chicago Sky (5-3) presents a matchup between two of the WNBA’s best point guards: Skylar Diggins-Smith and Courtney Vandersloot. In other action, the Connecticut Sun (2-6) aim to maintain momentum against the Dallas Wings (3-5), while the Seattle Storm (7-1) go for a fifth-straight victory when they face the Atlanta Dream (2-6).

Last Thursday, the Phoenix Mercury defeated the Chicago Sky, 96-86. Wednesday night at 9:00 p.m. ET, they meet in a rematch.

However, due to the absence of Diana Taurasi (back), the dynamics of this second contest will be different. Taurasi had 22 points and six assists last week, captaining an overall 61-point effort from the Mercury’s “Big Three.”

In the Taurasi’s absence, the pressure will be on Skylar Diggins-Smith to raise her play. On Monday, she showed she can, reminding the women’s basketball world why she has been a two-time All-WNBA honoree by tallying a season-high in points and assists with 26 points and seven assists, respectively.

On the other side, Player of the Week Courtney Vandersloot will be seeking to steer her team back into the win column after they were outclassed by the Seattle Storm on Monday night.

Vandersloot has established herself as an MVP candidate. She, once again, leads the league in assists with 8.9 per game. She also chips in 11.4 points per game.

The Sky need Sydney Colson, who only recently joined the team due testing positive for COVID-19, to find her footing and stabilize things when Vandersloot sits.

In contrast, the Mercury can expect a boost from their bench guards. Bria Hartley has been a super-scoring sixth woman for much of the season. She returned to lineup Monday night after missing a couple games, including last week’s contest against Chicago, with foot pain. Additionally, as showed the Sky last week, Shatori Walker-Kimbrough can ignite when given the opportunity.

Have the Connecticut Sun (2-6) finally found their stride? After stumbling to an 0-5 start, they will try for their third win in four games against the Dallas Wings (3-5). However, it is hard to beat a team twice in a week. Last Thursday, the Sun won their first game over the Wings, 91-68.

We will not get a redux of last Thursday night’s thriller between the Atlanta Dream (2-6) and Seattle Storm (7-1), when an explosive Chennedy Carter nearly led the Dream to a comeback upset. It is hard to see a Carter-less Dream hanging with a Storm team that not only has won four games in a row but also seems to have found their groove. And, Sue Bird might be back!

Key to the matchup: Do the Sun go as Jasmine Thomas goes? Thus far this season, positive performances from Thomas have correlated with Sun victories. However, that the Sun only have two wins suggest they need more from their starting point guard. Win or lose, the Sun can count on DeWanna Bonner and Alyssa Thomas to turn in all-out efforts. To more often find the win column, they need Jasmine Thomas to be just as reliable. She seems to have found her stroke, shooting over 50 percent from the field in her last three games after not shooting better than 36 percent in the five previous contests. She also has upped her assists of late, tossing nine, six and seven in the past three games.

Interview: Jasmine Thomas evaluates the Sun’s progress, as well as the advantages and disadvantages of bubble basketball

How to watch: The U, Fox Sports Arizona

Key to the matchup: Of late, Brittney Griner has beasted against the Sky. While she had 22 points last week, she had her season-high 34 points against the Sky last season. If Griner decides to dominate, the Sky lack the personnel needed to deal with her. Although Azurá Stevens brings good size at 6’6’’, she does not have the strength required to wrangle with Griner. Cheyenne Parker and Stefanie Dolson certainly have the feistiness needed when facing Griner, but they must frustrate her without fouling. If not, BG again will ball out.

Highlight: Britney Griner posts up and powers to the basket, overwhelming her Sky opponents

Key to the matchup: The Dream not only will be without their rookie, but they also will have to worry about the Storm’s rookie — Ezi Magbegor. The 20-year-old Australian has shown WNBA readiness during her nearly 13 minutes per game. She possesses enviable length and fluidity, flashing elite rim-rolling and rim-protecting abilities that suggest she could be one of the league’s best bigs within a few years. The Dream have yet to get much from their bench bigs, with Glory Johnson struggling after her extended quarantine and Kalani Brown only making her season debut last game due to her lengthy battle with COVID-19. Look for Magbegor to again thrive during her stints.