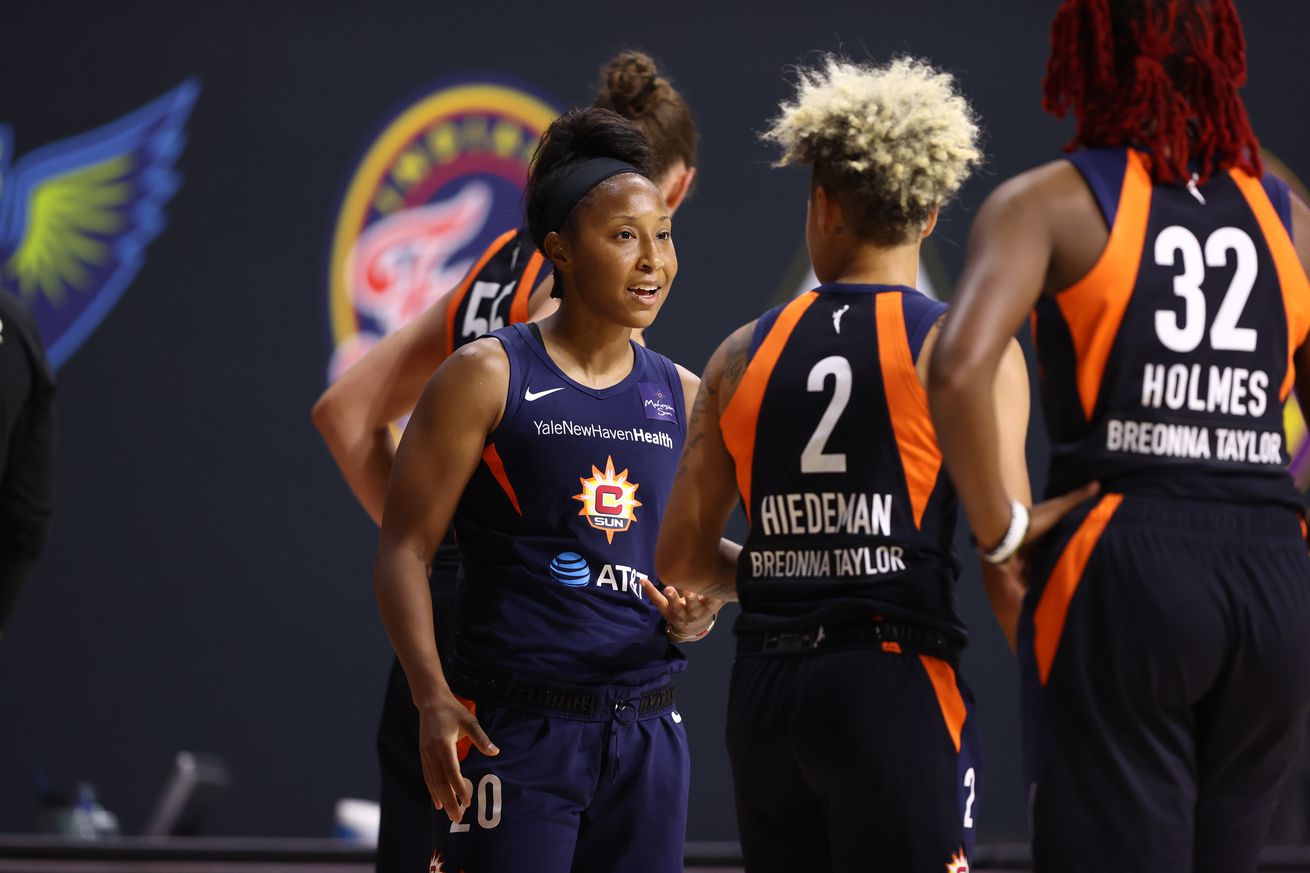 Briann January (left) has given the Sun a much-needed boost in the backcourt. | Photo by Ned Dishman/NBAE via Getty Images

The Connecticut Sun are back in the swing of things after a disappointing start to the season. They’ll now be faced with a big test in the form of a tough Las Vegas Aces team hungry to rebound from a close loss.

The Connecticut Sun — winners of five of their past seven games — will take on the second-place Las Vegas Aces on Thursday night in a game televised on CBS Sports Network.

Connecticut got off to a dreadful 0-5 start to the 2020 WNBA season, but seems to now have its act together. While the individual play of forwards DeWanna Bonner (19 points, 7.8 rebounds and 2.3 steals per game) and Alyssa Thomas (13.8 points, 9.3 rebounds and 4.8 assists per game) has remained stellar, the Sun have been able to go deeper into their bench to save wear and tear on their stars.

In particular, the Sun’s backcourt has gotten valuable reinforcements. Natisha Hiedeman and Briann January were late arrivals to Bradenton while recovering from COVID-19, but they’re good to go now, taking much of the pressure off of starting point guard Jasmine Thomas. Thomas has posted a true shooting percentage of 53.7 percent over her past five games.

The Aces, meanwhile, were one of the hottest teams in the WNBA before they got snuffed out by the Chicago Sky — and even that game could have gone to the Aces, who erased an 11-point fourth-quarter deficit before losing in the final seconds.

Las Vegas should thus be looking at this game as a bounce-back opportunity. The Aces are still in second place at 8-3, but the Los Angeles Sparks and Minnesota Lynx have identical records. Every game is crucial at the top of the standings, so expect Connecticut to get the Aces’ best shot in this one.

How to watch: CBS Sports Network, YES, The U

Keys to the matchup: The Sky are once again flying high after their big win against the Aces, a victory that was earned with a stout defensive game plan that made life difficult for MVP candidate A’ja Wilson. The Liberty will more or less be playing with house money; New York was decimated by Seattle in its last game, and one has to think that the only way for the young team is up. While the game could be a sloppy one — Chicago and New York are 11th and 12th in the WNBA in turnover rate, respectively — the Sky will have the talent advantage and will be expected to win as long as they minimize mistakes.

Keys to the matchup: Seattle is playing incredible team basketball, fresh off a 105-64 drubbing of the Liberty. None of the Storm’s starters played more than 22 minutes in that one, and that’s bad news for a Fever defense that’s currently allowing 109.9 points per 100 possessions; Sue Bird and Natasha Howard, in particular, should still be fresh for this matchup. Indiana will need to find a way to keep center Teaira McCowan on the floor and take advantage of her size, as well as take care of the basketball against Seattle’s fearsome defense.

Relive our 105-64 win over the Liberty with these full game highlights presented by @Symetra #StrongerThanEver pic.twitter.com/VS5dO1g7aw

Keys to the matchup: Can the Sun neutralize Wilson as the Sky did? Connecticut doesn’t have much length in the frontcourt, so it will be a tall order, but an absolutely essential one if the Sun are going to pull off the upset. You can bet the Aces will try to get their superstar going, but they’ll also need their backcourt to have a better showing than it did against Chicago; Jackie Young and Kayla McBride combined to shoot 5 for 26 from the field in the Aces’ loss.