By Eric Nemchock on Thursday, September 3, 2020 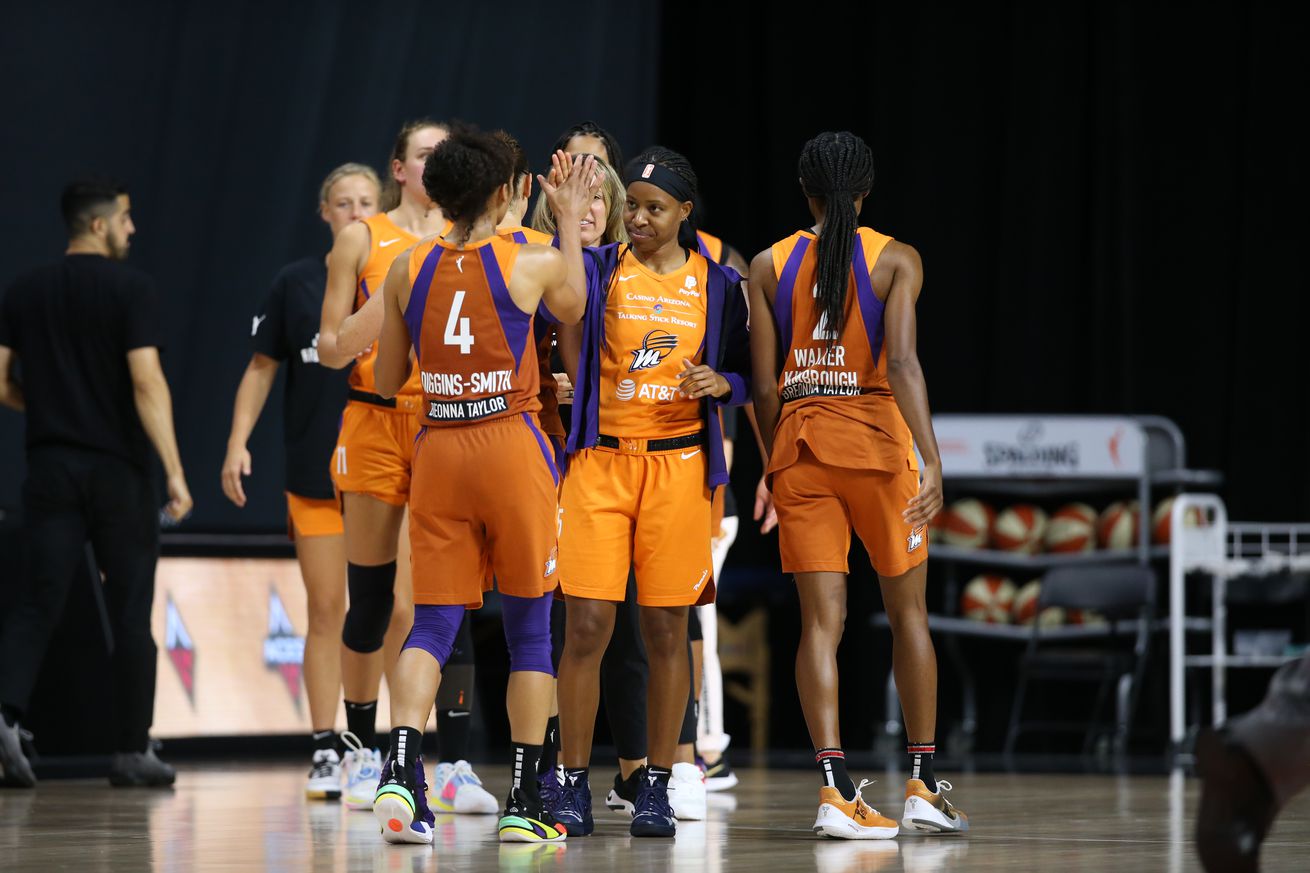 The Mercury may not have many healthy bodies at the moment, but they’ve been defying the odds regardless. | Photo by Stephen Gosling/NBAE via Getty Images

Improbably, the 10-7 Phoenix Mercury are one of the hottest teams in the WNBA. It’s no surprise who’s leading them, though: Diana Taurasi. They’ll try to make it five-straight wins Thursday against the 5-12 Indiana Fever. Plus, the 4-13 Atlanta Dream take on the 2-14 New York Liberty and the 12-4 Las Vegas Aces clash with the 8-9 Connecticut Sun.

The Phoenix Mercury, winners of four consecutive games, will take on the playoff-hopeful Indiana Fever in the nightcap of a three-game slate of games on Thursday. Tipoff is scheduled for 10 p.m. ET and the game will be broadcast for free on Facebook.

Just over a week ago, it would have been hard to imagine the Mercury would be in the position they’re currently in. Phoenix is 10-7 despite taking several substantial hits to its roster depth; shortly after All-Star center Brittney Griner left the bubble for personal reasons, Sixth Woman of the Year candidate guard Bria Hartley tore her ACL. The Mercury are left with Diana Taurasi, Skylar Diggins-Smith and a hodgepodge of role players.

Taurasi has been on a tear since then, however, and several of those role players have proven their value and then some. Brianna Turner, in particular, has put up eye-popping defensive numbers during Phoenix’s four-game winning streak, grabbing 13 rebounds and blocking four shots per game while providing a level of activity that has invigorated the shorthanded squad.

Taurasi, meanwhile, has been Taurasi. She’s scored 25.8 points per game (nailing 41.7 percent of her three-pointers) and has run the Mercury offense with the fervor of a player ten years her younger. It’s led to a highly-efficient offense for the Mercury, who are scoring 110.9 points per 100 possessions and assisting on 72 percent of their baskets during that span — an exciting brand of basketball that would lead one to believe they’re playing with a full 12-player roster, not an eight-player one.

The Fever seem ripe for the picking. Indiana has given up 100 points or more in back-to-back contests, and its defense is allowing a league-high 110.7 points per 100 possessions on the season. The Fever are still fighting for a playoff spot at 5-12; the Dallas Wings, currently at 6-11, are their biggest adversary. With time running out in the regular season Indiana will need to find a way to put Phoenix’s streak on halt with an upset.

The Dream are coming off a win over the Fever, while the Liberty have lost two straight after upsetting the Sky on Aug. 25. Chennedy Carter and her Atlanta squad could move into 10th place or a tie for ninth depending on how the Fever do.

The Aces have surrendered second place to the Los Angeles Sparks for the moment and lost their most recent game, which was against the Mercury. They will try to reassert themselves against DeWanna Bonner and the Sun, winners of two-straight.

Keys to the matchup: The Liberty have seemed destined for another lottery appearance since the beginning of the season and the Dream might ultimately join them. This is, however, a winnable game for Atlanta, so expect the team to play as such. The Liberty have been flat-out bad at taking care of the basketball and preventing points off turnovers, so this should be a weakness the Dream’s aggressive perimeter athletes can capitalize on.

Keys to the matchup: The Sun continue their steady ascent and are now looking good for a playoff appearance as they sit at 8-9 after starting the season 0-5. But the last time they played the Aces they lost in a 21-point blowout. Free throw disparity was a major factor in that game, as it tends to be in most Aces games. The Sun will need to do a better job of keeping the Aces — A’ja Wilson and Dearica Hamby, in particular — off the line in order to keep this one close.

Highlight: Bonner slithers her way to the rim

Keys to the matchup: Can the Mercury keep up their level of play given their injury situation? If forwards Nia Coffey and Sophie Cunningham both sit out (see injury report), Phoenix will have just seven available players. Of course, when Taurasi is on one of her patented hot streaks it doesn’t matter much who’s playing beside her. The Fever will need their backcourt of Kelsey Mitchell and Julie Allemand to step it up defensively if they’re to have a chance in this game. Otherwise, Indiana’s league-worst defense will be in for another rough night.

Highlight: Taurasi drains it from deep