Preview: The Seattle Storm and Chicago Sky face off for the second time 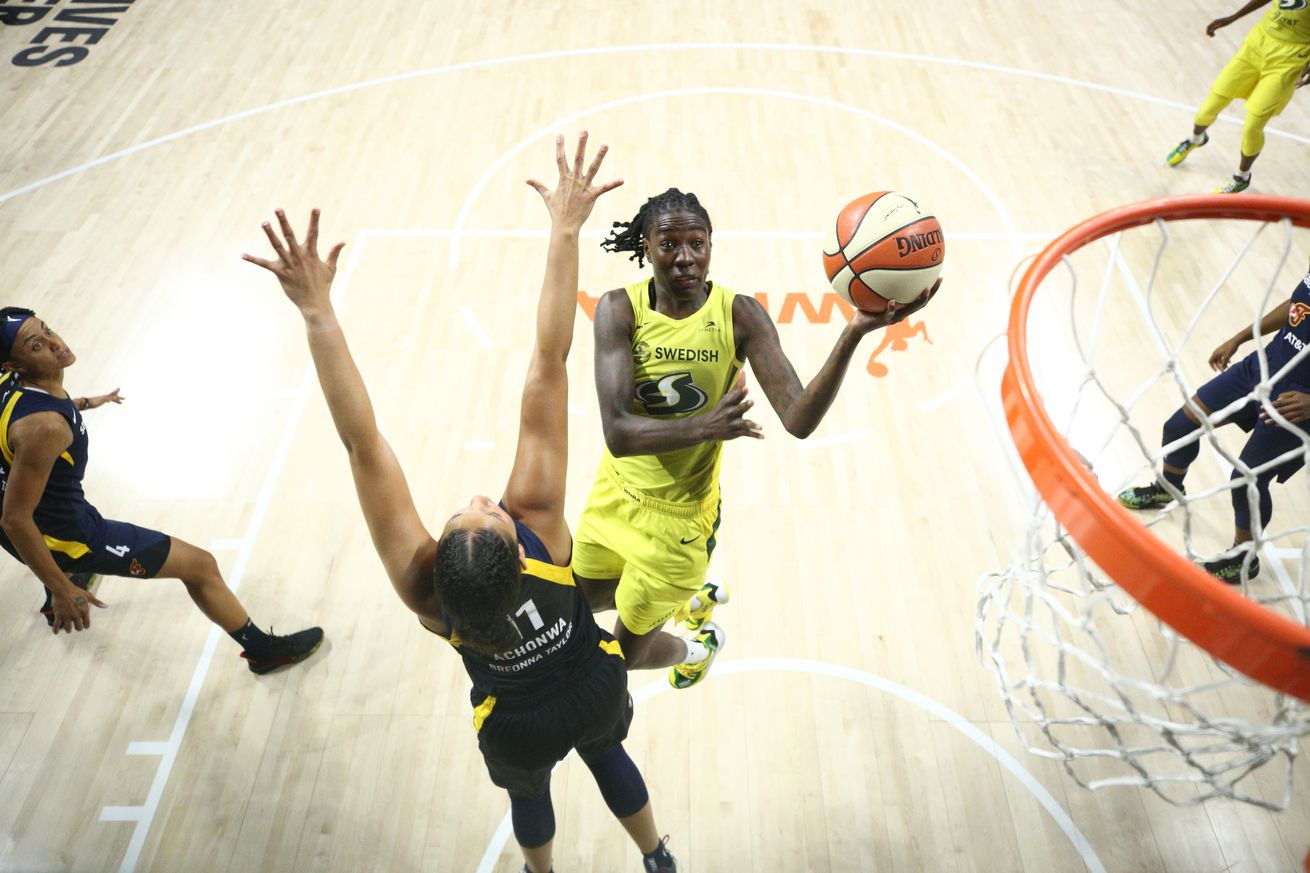 Natasha Howard has picked up her play over the Storm’s last five games, scoring in double figures in each of them. | Photo by Ned Dishman/NBAE via Getty Images

The Seattle Storm and Chicago Sky look to build their positions in the standings as the Las Vegas Aces look to take down the New York Liberty. Meanwhile, the Dallas Wings and Indiana Fever duke it out for the WNBA’s final playoff spot.

The Seattle Storm close out August against the Chicago Sky. The Storm currently maintain a slim lead over the Las Vegas Aces and Los Angeles Sparks in the battle for the top record in the league while the Sky look pull within one game behind first-place Seattle.

In their matchup nearly three weeks ago, the Storm easily beat the Sky after jumping out to a 33-18 lead after the first quarter. The Storm were able to win that game without Sue Bird, who is likely to be out once again.

The Sky and the Storm rank 2nd and 3rd in scoring, respectively, while the Sky lead the league in field goal percentage ( the Storm are 4th), which leaves open the door that this could be a barnburner. However, we know that the Storm are outstanding on the defensive end. Seattle leads the league in opponent field percentage and opponent scoring. Additionally, the Storm generate just over 17 turnovers per game which they consistently turn into points. The Sky committed 21 turnovers in their loss to Seattle earlier in the season.

The Sky are just in the middle of the league in most defensive categories. Chicago will need to pick it up on the defensive end as they have given up an average of 86 points over their last four games. In their last-second loss to the New York Liberty, the Sky allowed the Liberty to shoot 55 percent and make 14 3-point shots.

The New York Liberty face the Las Vegas Aces for the second time this season, with the Aces winning a nail-biter the first time around. The Liberty ended their seven-game losing streak with a tight win over the Sky in their last game. Meanwhile, the Aces held off the Dallas Wings in a tight victory for their third straight win.

The Aces are 2-point reliant team, a strategy that has yielded success this season. Around 84 percent of the Aces’ shots are inside the 3-point arc, with 65 percent of their points coming from on 2-point field goals. Defensively, the Aces hold their opponents to under 30 percent in 3-point field shooting, despite facing the most attempts.

In their last meeting with the Aces, the Liberty made 10 3-point shots. How many 3-point shots the Liberty make will be a critical stat as they have made a total of 26 shots from beyond the arc in their two wins. The Liberty are not astute on defense and going up against an offense like the Aces will make it imperative that their 3-point shooting is effective.

The Indiana Fever and the Dallas Wings battle for eighth place. Both teams are looking to avoid a third straight loss as we edge closer to the end of the regular season. The Wings edged out the Fever 76-73 in their last meeting.

Both teams are quite poor defensively as they both sit in the bottom half of defensive rating and allow their opponents to make around 46 percent of their shots. Indiana has held just one of their last six opponents below 80 points and has failed to score 80 points in four of its last six games.

Offensively, the Wings are a high-volume 3-point shooting team, yet it appears to make little difference whether they win or lose as they make about the same amount of 3-point shots no matter the outcome. One area that seems to change is free throws, as the Wings average nearly more four more attempts from the charity stripe in wins. This could be a low-scoring affair or if they catch fire, it could be a high-scoring game, but expect this one to be close.

Key to the matchup: Amanda Zahui B. and A’ja Wilson are the critical pieces for both teams. Zahui B. is a threat from beyond the arc and her success from that area of the floor will be critical in deciding the outcome. A’ja Wilson is second in the league in scoring with 20.3 points and is quite possibly the future 2020 WNBA MVP. The Liberty will need to limit her impact on the game.

Key to the matchup: Jewell Loyd has been cold as of late, shooting 2-of-18 from the floor in her last two games. With Sue Bird out once again, Loyd will need turn a corner. Stefanie Dolson will likely match up with the resurgent Natasha Howard. Dolson’s ability to score while keeping Howard in check will likely loom large in this one.

How to watch: CBS

Key to the matchup: In their last meeting, Kelsey Mitchell scored just eight points while Arike Ogunbowale scored 15 points on 5-of-22 shooting. Look for these players to be sharper and aggressive early.