Preview: Will Aces vs. Sky be another down-to-the-wire classic? 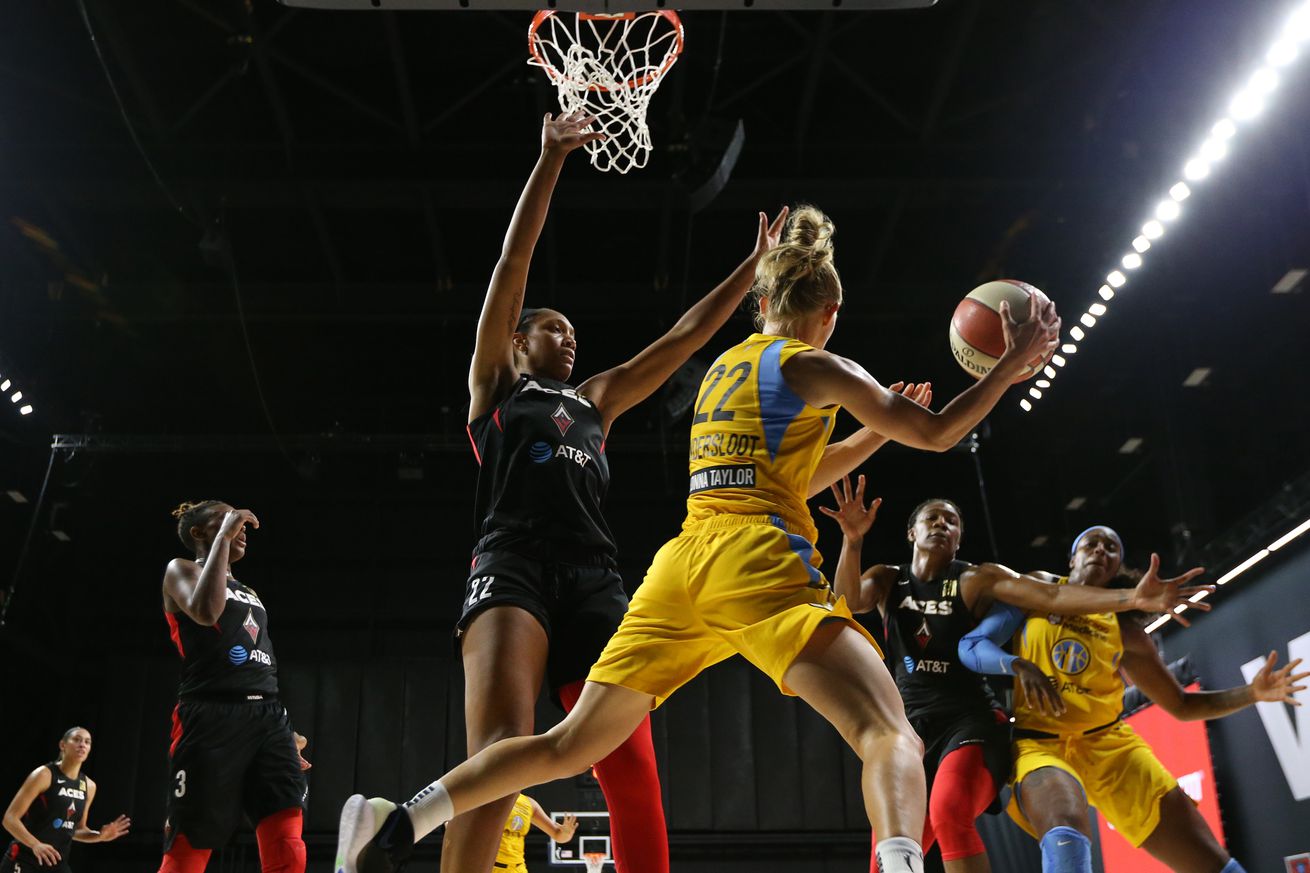 Courtney Vandersloot (#22) navigates the Aces’ defense, searching for a Sky teammate to dime up. | Photo by Stephen Gosling/NBAE via Getty Images

The last two matchups between the Las Vegas Aces (8-2) and Chicago Sky (7-4) have been thrillers: one ending with Dearica Hamby’s historic heave and the other with Allie Quigley’s clutch three. How will Tuesday night’s contest end? Find out after the Indiana Fever (4-6) and Connecticut Sun (4-7) square off. Rounding out the triple-header is the New York Liberty (1-9) versus the Seattle Storm (10-1).

Dearica Hamby with the steal and shot for the win!

The historic heave is why the WNBA featured the two teams on opening weekend, when Allie Quigley helped the Sky exact a measure of revenge by sinking a clutch 3-pointer to steal a two-point win, 88-86.

Allie Quigley hits the three for the LEAD! pic.twitter.com/OddAl9dRVg

Since that first game, the Aces have coalesced into a juggernaut. They enter Tuesday’s contest with the league’s second-best record, a status attained due to the seven-game win streak they currently are riding. While A’ja Wilson has been MVP-level excellent and Angel McCoughtry has exceeded the most optimistic expectations, positive play up and down the lineup has buoyed the Aces. Even when Wilson sits, the Aces hold serve, with only a slightly negative point differential of minus-0.2 without her.

The breakout performance of Jackie Young has contributed to Vegas’ 40 minutes of effectiveness. So has the play of Danielle Robinson, who has emerged as a reliable, impactful backup point guard. Over the course of the season, Robinson has upped her assists per game, suggesting she has begun to establish confidence and chemistry with her teammates, all while maintaining her signature defensive persistence.

The Sky, in contrast, have been more uneven than expected. Injuries, in large part, have prevented Chicago from proving that they have #NoCeiling. Correctable mistakes — too many turnovers and not enough defensive focus — have stymied them. The Sky average 17.4 turnovers per game, only better than the one-win New York Liberty. A tendency to foul also can cause curtail their consistency on both ends on the floor, especially as foul trouble often sends their two dynamic bigs — Cheyenne Parker and Stefanie Dolson — to the bench.

Nevertheless, Chicago is the WNBA’s sharpest shooting team. Their league-best true shooting percentage of 58.6 percent suggests they can stroke their way to a win in almost any game.

This contest between the seventh-place Fever and eighth-place Sun could clarify the hierarchy at the bottom of the playoff picture. Connecticut head coach Curt Miller seems to have found a reliable, deeper rotation, suggesting his squad may be a tier above Marianne Stanley’s Indiana team, as Stanley has yet to settle on a regular, consistent rotation.

No matter how much fight and focus the Liberty bring to this matchup expect the Storm to romp to their ninth-straight win, with Breanna Stewart, Sue Bird and the Storm’s other starters likely able to enjoy the fourth-quarter action from the sidelines.

Key to the matchup: It is should not be surprising that Teaira McCowan has been more effective and engaged in Indiana’s wins. In wins, the sophomore has averaged a double-double of 13.3 points and 10.8 rebounds, while also getting to the free-throw line more than five times per game. In losses, her numbers drop to 9.5 points and 5.5 rebounds, with only three free-throw attempts. Against Connecticut center Brionna Jones McCowan has demonstrable physical advantages, which should translate to advantages in the box score and on the score board. However, McCowan has disappointed during the first half of the 2020 season, too often playing without necessary urgency. In contrast, Jones has emerged as a serviceable option for the Sun.

Highlight: An aggressive Teaira McCowan with the board and bucket

Key to the matchup: Can the Sky stop Angel McCoughtry? In the opening game between these two teams, McCoughtry was a game-high plus-12, meaning that the Aces won McCoughtry’s minutes by 12 points even as they lost the game by two points. Vegas head coach Bill Laimbeer has strategically deployed McCoughtry this season, playing her in shorter spurts in order to maximize her effectiveness. As such, Chicago head coach James Wade must prepare multiple defenders for the McCoughtry matchup, a tall task since no Sky player profiles as an “Angel stopper” due to McCoughtry’s combination of size, quickness and craft.

Highlight: Angel McCoughtry with the tough take and make

Key to the matchup: It is hard to find any hope for the Liberty. With the league’s top-rated offense and defense, the Storm claim a net rating of plus-16.8, a mark 6.5 points above the second-place Aces. The Liberty, with the league’s worst offense and third-worst defense, have a net rating of minus-16.5. The Storm’s defensive proficiency, in particular, should extinguish the optimism of the Liberty, or any other opponent. Even if their shots are not falling, Seattle can rely on a historically-great defense to carry them to another victory.