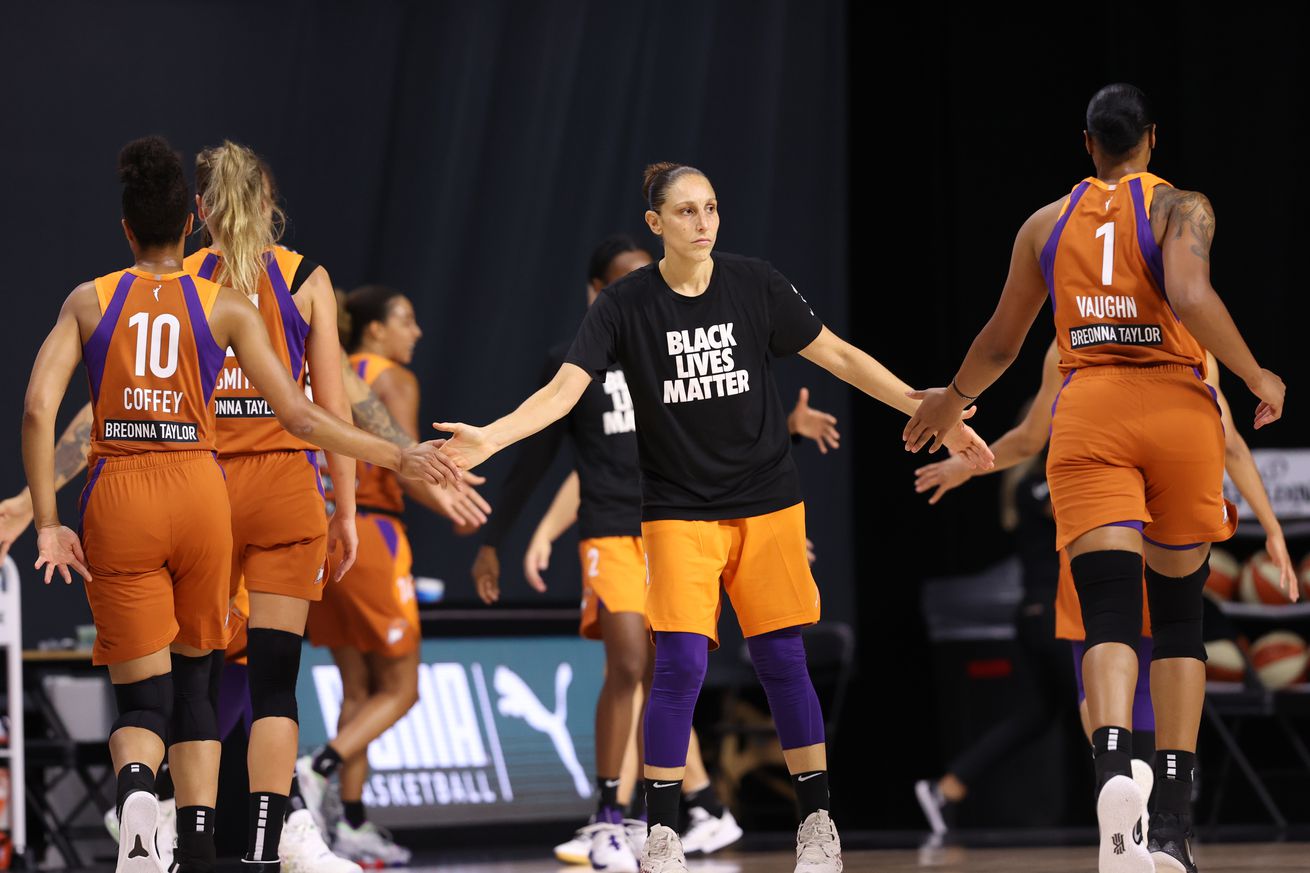 Diana Taurasi (center) has leadership qualities that are just as important as her talent at this stage of her career. | Photo by Ned Dishman/NBAE via Getty Images

The Phoenix Mercury caught fire after losing their first two games of the season and will try to continue that success against the unproven Atlanta Dream. Meanwhile, the Chicago Sky hope to sustain momentum versus the Dallas Wings and the Seattle Storm will try to keep the Connecticut Sun winless.

The Phoenix Mercury lost their first two games of the season, but looked like the contender they are expected to be when they defeated the Las Vegas Aces on Friday and then dominated the New York Liberty on Sunday to move to 2-2.

Bria Hartley came off the bench to score 27 points in the Liberty game, while Diana Taurasi’s razor-sharp focus was on full display. Taurasi, the WNBA’s all-time scoring leader, looked determined to do whatever in order to win. After less than stellar performances in the first two games, Taurasi demonstrated that her intangibles alone can help lead the Mercury to victories.

Today Phoenix turns to a fellow 2-2 team in the Atlanta Dream that isn’t facing the same high expectations and is hoping to get its first win against a veteran squad. Atlanta’s two wins so far have come against very young teams in the Dallas Wings and New York Liberty.

Atlanta has seen breakout 30-point performances from both Monique Billings and Betnijah Laney, while Elizabeth Williams and rookie Chennedy Carter have been more consistent with double-figure scoring numbers in all four of the Dream’s games. With Courtney Williams returning on Friday against New York and scoring 18 in Sunday’s loss to the Indiana Fever, Atlanta has added another great scoring option.

Phoenix has the best offense in the WNBA right now while Atlanta is middle of the pack. Atlanta will likely need to need to put up a lot of points in this battle between the two worst defenses in the league if it wants to win. The Dream have allowed 366 points through four games, while the Mercury have allowed 367 (both around 92 points per game).

The Sky (3-1) looked really good against the Washington Mystics on Saturday and are now tied with them for first place, along with the Minnesota Lynx and Seattle Storm. Dallas (2-2) will be looking to bounce back from a loss to the Las Vegas Aces.

Connecticut has relied heavily on DeWanna Bonner and Alyssa Thomas, especially Bonner, who is first in the league with 27.5 points per game. However, the Sun are still winless and face a tall task against the league-favorite Storm.

How to watch: WCIU, FOX Sports Southwest Plus and WNBA League Pass

Key to the matchup: Sharing the ball. The Sky are first in the WNBA in assists, led by Courtney Vandersloot who averages 8.3 per game. The Wings are 11th in that category and their star guard Arike Ogunbowale leads the league in field goal attempts per game with 20.8. She is only shooting 36.1 percent from the field and Dallas is ninth in the league with a field goal percentage of 41.3. The Wings need to make the extra pass to get better shots if they are to compete with the Sky’s offensive flow.

Key to the matchup: Diana Taurasi. The Mercury have plenty of weapons with Bria Hartley (19.8), Brittney Griner (16.3) and Skylar Diggins-Smith (14.5) all averaging double digits in the scoring column. But right now Taurasi (15.5 points per game) has the steering wheel and she needs to continue leading the team out of its slump and toward excellence. She is averaging six assists per contest and has a huge experience advantage over Atlanta’s leading distributor, Chennedy Carter (four assists per game). As long as Taurasi’s presence in the backcourt can prevent Carter from having a big game, the Mercury should be fine.

Highlights: Taurasi and company looking more poised against the Liberty on Sunday

Key to the matchup: The Sun need players besides DeWanna Bonner and Alyssa Thomas to step up. Both teams are reliant on their leading scorer — Bonner for the Sun and Breanna Stewart (18.0 points per game) for the Storm — as of right now. But Seattle knows that Jewell Loyd (11.3) and Natasha Howard (5.0) are capable and proven scorers who happen to have lower averages than expected at the moment. On the other hand, the Sun’s lack of scoring depth has been a real issue and it’s the reason the team is 0-4. Connecticut, which is 11th in the league in points and field goal percentage, desperately needs more contributors in this game against a Seattle team that is first in points allowed and opponent field goal percentage.

Interview: Get to know the Sun’s third-leading scorer, Brionna Jones (8.8 points per game)