Preview: Will the Storm cloud the Sky’s quest to share No. 1? 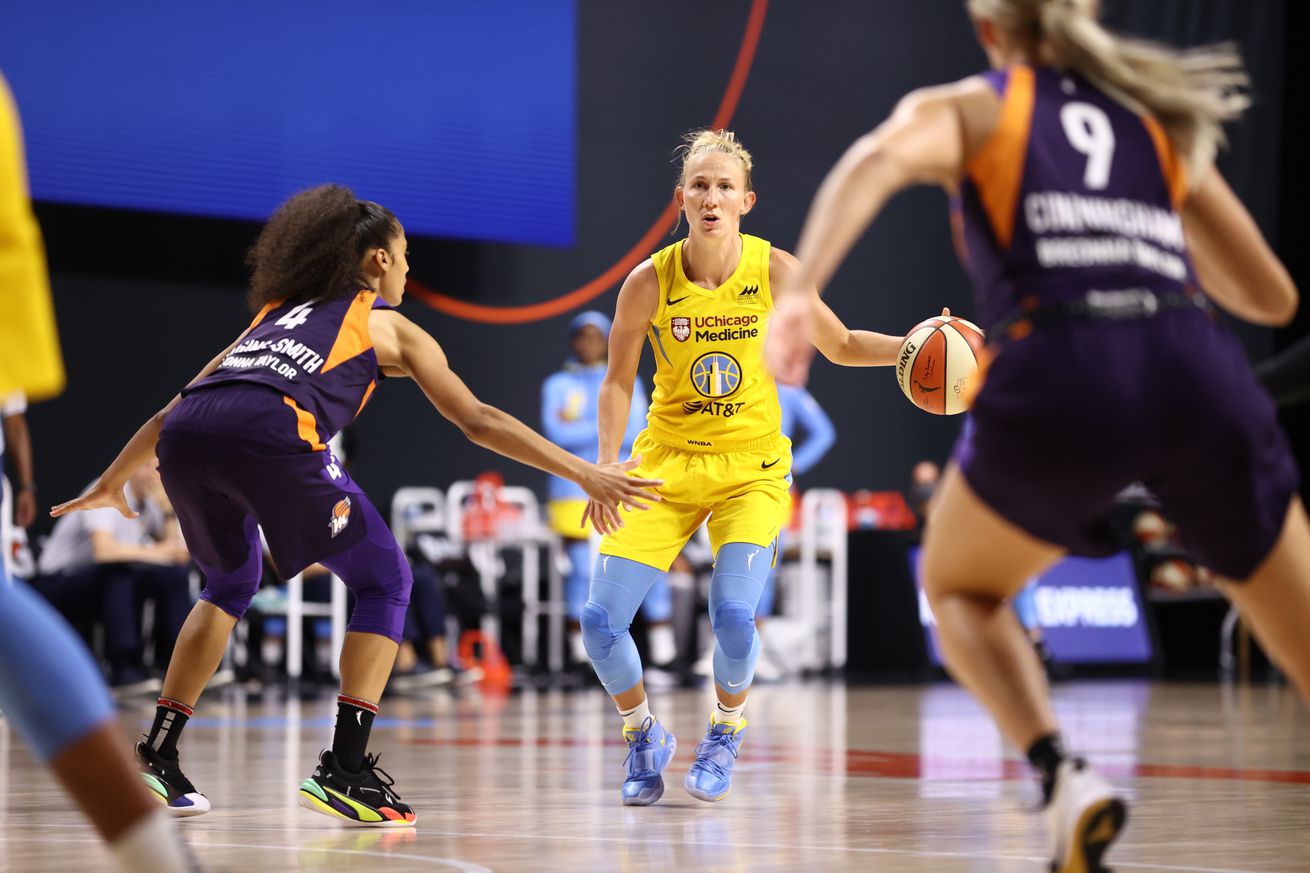 Courtney Vandersloot (with ball) scans her options during the Sky’s loss to the Phoenix Mercury on Saturday, Aug. 6, 2020 at IMG Academy in Bradenton, Florida. | Photo by Ned Dishman/NBAE via Getty Images

The Courtney Vandersloot-led Chicago Sky (5-2) and the Breanna Stewart-charged Seattle Storm (6-1) are two of the best teams in the WNBA right now. Before their battle near the top of the standings, the Connecticut Sun (1-6) meet the Atlanta Dream (2-5) and the Phoenix Mercury (4-3) square off against the Dallas Wings (3-4).

The first-place Seattle Storm look to extend their four-game winning streak against the Chicago Sky when the two teams meet Monday night at 9 p.m. ET (ESPN2).

The Minnesota Lynx and Las Vegas Aces are both off tonight and, for now, remain at 5-2.

The Storm have the edge in this one on paper if you consider the fact that their offense is middle of the pack while the Sky’s defense is toward the bottom of the league. Chicago is 12th in opponent field goal percentage and opponent 3-point percentage and is tied for ninth in points allowed per game.

The Storm have lived up to their preseason hype, save for one blowout loss to the 3-4 Washington Mystics. Meanwhile, the Sky have excelled at winning close games to get themselves to 5-2.

Seattle’s Breanna Stewart is fifth in the WNBA in scoring with 19.4 points per game, seventh in rebounding with 8.3 boards per game and in the Top 10 in a handful of other categories, making her an early MVP contender behind A’ja Wilson of the Aces. Chicago’s Courtney Vandersloot is once again dominating the assists category with 8.9 helpers per game. Seattle’s rising star point guard Jordin Canada is sixth with 5.0 assists per contest.

Atlanta is looking to end a four-game skid against a Connecticut team that took until Aug. 6 to pick up its first win. The Dream started 1-0 and 2-1 and their star rookie Chennedy Carter is averaging 19.4 points per game, but their best performance against a top team fell short when they lost by one point to the Storm.

The Mercury’s four-game winning streak was snapped by the Storm on Saturday, while the Wings are coming off a 10-point win over the Dream. A .500 record is on the line for Dallas, while Phoenix will look to improve to 5-3.

How to watch: FOX Sports South and WNBA League Pass

Key to the matchup: Free throw shooting. Outside of free throws attempted, the Dream are a better offensive team than the Sun, but they have the worst defense in the league. That leaves the door open for Connecticut, but Curt Miller’s squad will need to make good on its free throw attempts if it wants to win. The Sun have attempted 29 more free throws than the Dream this season (about four more per game), but they are shooting 71.6 percent from the stripe (last in the league). Atlanta is tied for first at 84.2 percent.

Highlights: Chennedy Carter pours in the points points against the Storm

Key to the matchup: Efficiency. The Wings shoot more field goals than any other team in the league and are second in 3-pointers attempted, but are struggling with their percentages. Phoenix has a sizable advantage in both field goal percentage (46.6 to 41.4) and 3-point percentage (35.1 to 30.9). The Mercury will look to force the Wings into more of the cold shooting that has plagued them this season because if they don’t, Arike Ogunbowale and company could put up points in a hurry.

Highlights: Mercury knocking down shots inside and out

Key to the matchup: The leadership of Breanna Stewart vs. the leadership of Courtney Vandersloot. Stewart has been a calm and steadying force on the court for Seattle. She knows when she needs to step up and increase her attempts to get her team out of a slump. On the other hand, Vandersloot sets the tone early in games for Chicago. Both teams have a ton of talent and either offense or defense could prevail on any given night. That may leave intangibles as the deciding factor in this one.