Q&A with Skylar Diggins-Smith during the pandemic 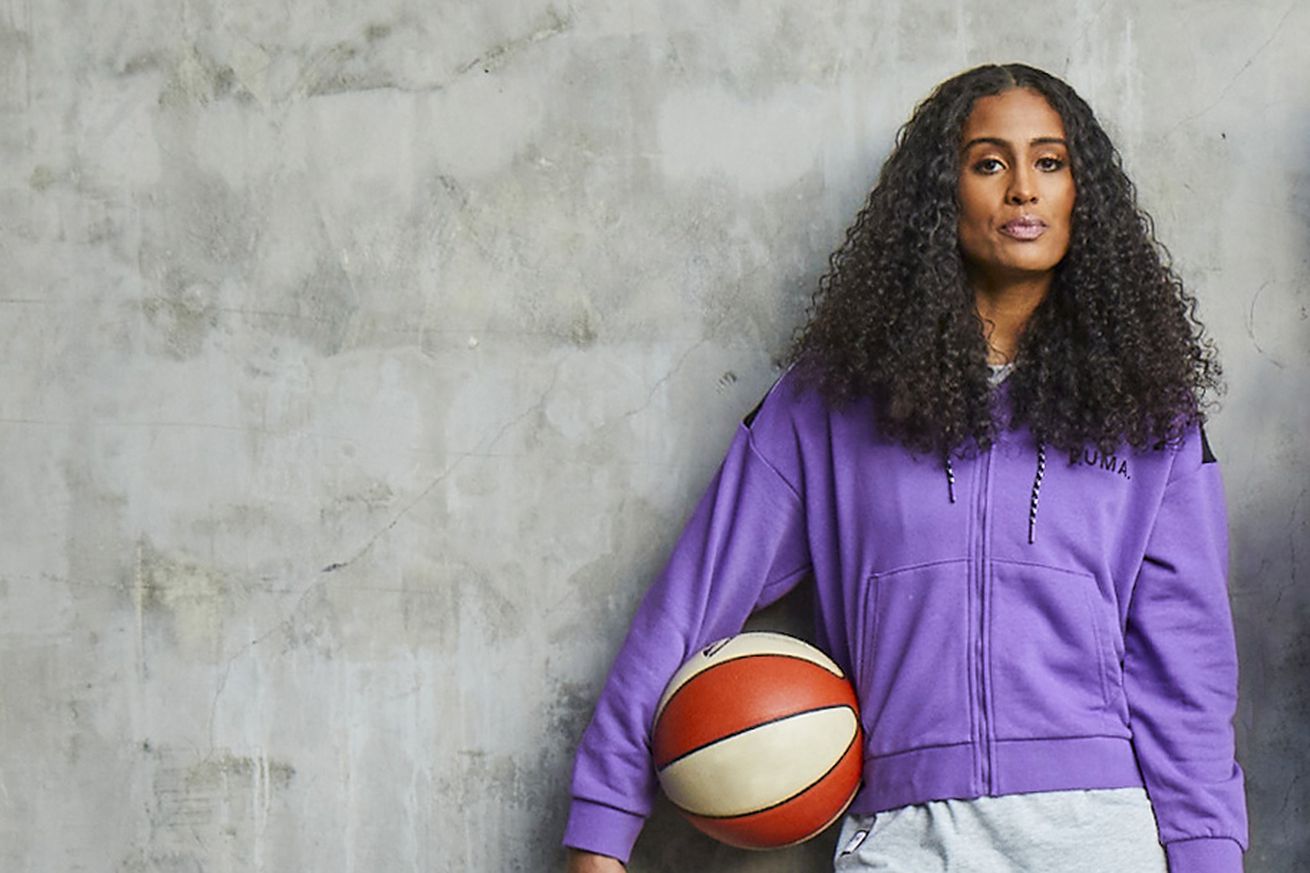 Skylar Diggins-Smith signed with the Phoenix Mercury during the WNBA free agency signing period in 2020. She spent the first seven years of her career with the Dallas Wings organization. | BODYARMOR

Amid the landscape of uncertainty caused by the global pandemic, Skylar Diggins-Smith spoke by phone on Wednesday with Tamryn Spruill about life during lockdown, hope that a 2020 WNBA season will happen and what the new #OnlyYouCan BODYARMOR campaign means to her.

Seeking a career reset after spending the first seven years of her WNBA career with the Dallas Wings, Skylar Diggins-Smith signed with the Phoenix Mercury in February — just one month after the league and the WNBPA announced the two parties had agreed to terms for a new collective bargaining agreement. She — like all players and fans — were looking forward to the 2020 season with extra excitement added to the usual anticipation. Add in that she did not play in 2019 while on maternity leave and it becomes clearer how badly Diggins-Smith sought a return to competition. Then, like the rest of us, she abruptly had to adjust to a new reality of stay-at-home orders and social distancing during a global pandemic that brought sports to a halt. Amid this landscape of uncertainty, I caught up with Diggins-Smith by phone on Wednesday and she shared about her life during lockdown, her hopes that a 2020 WNBA season will happen and what the new #OnlyYouCan BODYARMOR campaign means to her.

This interview has been edited for conciseness and clarity.

How are you and your family holding up during social distancing and the pandemic?

It’s been different and hard to schedule and plan things, but we’re just rolling with it day-to-day and continuing to stay safe, protected, and to do our part in terms of social distancing. So, other than that, I’ve just been trying to get in my workouts when I can and try to stay ready for if they say we can play.

What is the top thing you miss being able to do right now?

What are you enjoying most about being at home?

How much contact do you have with the team right now and how are you approaching your training?

We do have strength and conditioning coaches and team athletic trainers that we’ve been in contact with, as well as (with) our team coaches and front office team. They have a plan, and the strength conditioning coaches have a plan, so we refer to those in terms of what to do. And if you have any conditioning work, that’s on your own — ride bikes, run, or whatever the case may be. And the same with basketball, just trying to do some drill workouts. I’ve actually been taking advantage of Zoom and doing workouts via virtual training.

There were a lot of big gains for the WNBA this year, including the new CBA and an exciting free agency. Do you have any concerns about whether the league can sustain the momentum of those gains?

That hasn’t even really crossed my mind to be honest. Sometimes I feel selfish speaking out and talking about basketball during times like this, even though it’s something I’m passionate about and I know it affects a lot of people and sports brings people together. But we want to start doing that (when we can), make sure that we’re safe and protected first. Obviously, it’s something that we all miss. But I think (the postponement of the season) makes it more exciting, because it’s a build up.

Our game is continuing to grow, what women are doing, evolving as athletes — it’s growing every day. So, it’s in great hands, and I don’t suspect people will have to wait too long to watch us play (again). I’m not worried about the momentum at all because the level of play is so high. And the first thing you’ve got to have is talent, and that’s what we do have in this league. I’m excited about the possibilities, new opportunities, and obviously, I’m excited about competing.

Some sports are reopening. Do you know if the WNBA will soon follow?

I have no idea. It’s been some different plans floating but I haven’t heard anything for sure. Obviously, it’s difficult because we have teams in different states, with different social distancing rules and stay-at-home orders in place. I don’t know how it goes as far as advantage or disadvantage or unfair advantage if one team was able to work out in one state where another team couldn’t. So, I think everybody’s just trying to find a plan that we can execute realistically. Hopefully, we’ll see some answers soon, in the next month or so. But I can understand why it’s been so hard to plan.

I have faith that we’ll be able to figure it out, and we just want to make sure that it’s safe for everybody. It’s a lot of great talent that I can’t wait to be on display and compete against, so … I think everybody should still be excited about it. From what I’ve heard, (the season) is supposed to happen. I haven’t heard the word “cancel” one time, so that’s good.

So, we’ll just have to see what happens. Until then, we’ll just have to send thoughts and prayers to everybody and make sure that they stay safe during this time until we figure it out. All I can do is just control what I can control — work out, stay strong and just try to be as productive as I can.

You and other big stars in the league signed with new teams in free agency. Can you describe the family atmosphere that drew you to the Phoenix Mercury?

Outside of what my profession is, just being a working mom and a traveling mom, sometimes we’re gone for days at a time. For me, personally, I would like to bring my son for sure (on road trips). My husband knows (our son) loves that, to be able to come to the gym and see me in my element. I think it’s great that he has other children from the team that he can interact with, when it’s safe to do so obviously.

But Phoenix, the organization — for as long as I’ve competed against them, as long as I’ve known them and, now, being a part of it — has always had a great setup and has always been a great family organization. So with me having a child, with us having a son, that was something that was a huge priority. It’s great playing under a mom in Sandy Brondello and having another mom, Julie (Hairgrove), as an assistant coach, who has children, and a few of my teammates have children. So, it’s great having other moms. You feel like you’re being seen, you feel like you’re being heard, and those resources show that they care about you.

You filmed a new BODYARMOR commercial before the pandemic. What can you tell me about the latest campaign?

I love BODYARMOR — I’ve been with BODYARMOR since 2013 — our partnership and just growing. Seeing the brand today and what it’s doing it’s just amazing to be a part of it. The talent that we have, the roster of spectacular athletes that I get to work with, or work around. This recent (commercial) I shot right after Naomi Osaka, so we kind of did some things together. It was cool being with her in her element … obviously, (she’s) one of the greatest tennis players alive right now. And, obviously, James Harden is somebody that I admire very much. You know, the list goes on and on. Megan Rapinoe — just a great, great voice for us, as women, for us, as athletes. I love what she stands for.

It’s wonderful to see all the athletes that’s in the commercial as well, (and) all their levels of success, all the hurdles that they’ve had to overcome. And, really, it just goes along with the whole campaign. “Only you can” make yourself great. And that evolves from the work ethic, the work that you put in on the floor, or on the field, and taking care of your body, and what you put into your body nutrition-wise.

What message do you hope everyday people out in the world, non-athletes, will take away from the #OnlyYouCan messaging?

Just the mantra of getting better, continuing to improve yourself. You don’t have to be the best, but you have to be the best version of yourself. You owe it to yourself to be the best version of yourself. It’s all about taking accountability, setting goals and continuously working towards those goals and, really, just trying to improve every day. I don’t think that success is linear. I think that it’s going to be ups and downs on the way to those goals but encouraging everybody to challenge themselves to see how high their elevator can go.

BODYARMOR’s #OnlyYouCan campaign is the company’s largest advertising and marketing campaign to-date. The commercial features Skylar Diggins-Smith, James Harden, Mike Trout, Megan Rapinoe, Naomi Osaka, and Dustin Johnson, and is narrated by Michael B. Jordan. The #OnlyYouCan spot debuts on national television during “The Match” on Sunday, May 24, and will run throughout the summer.