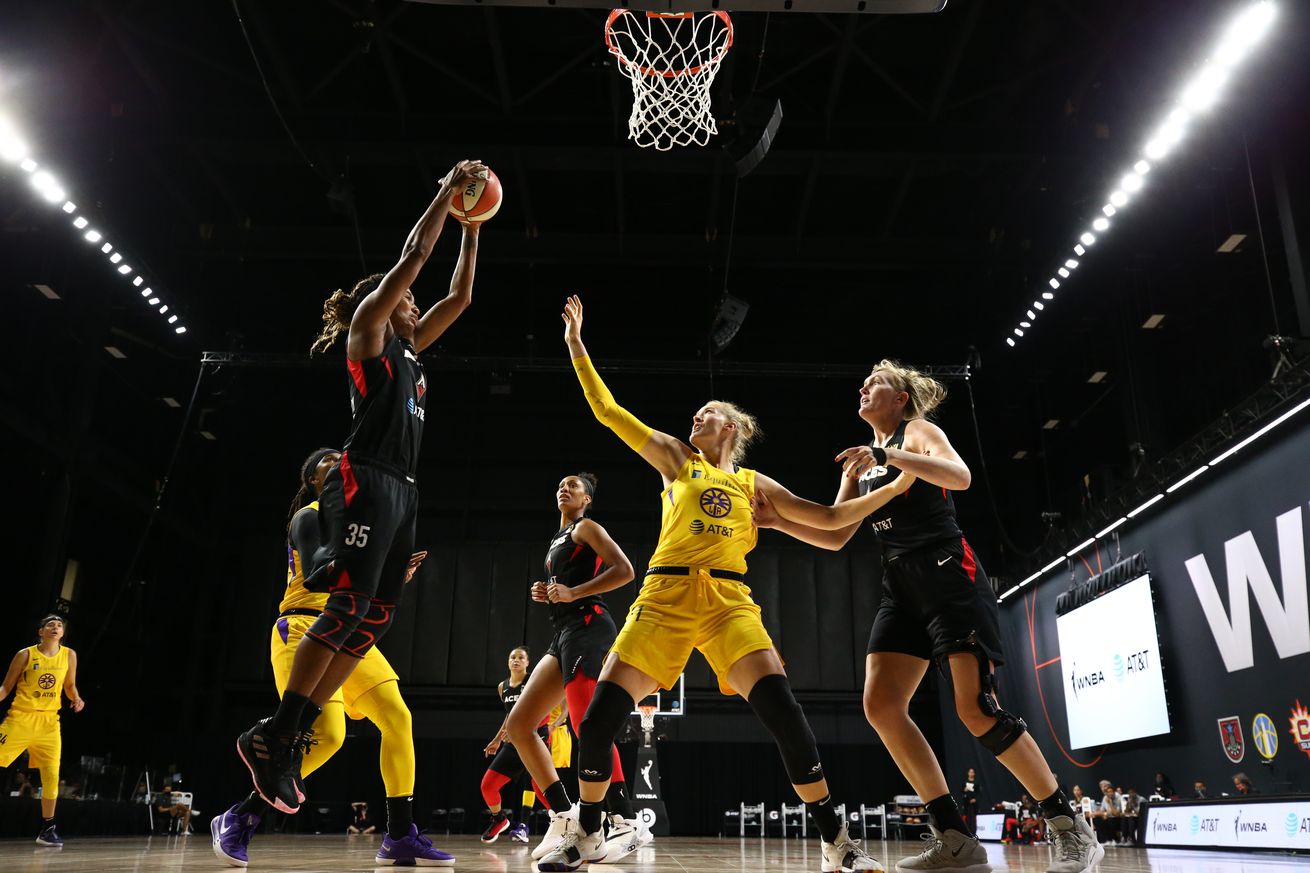 Angel McCoughtry snags a rebound during the Las Vegas Aces’ victory over the Los Angeles Sparks. | Photo by Stephen Gosling/NBAE via Getty Images

With a combined 50 points from A’ja Wilson and Angel McCoughtry, the Las Vegas Aces got the win over the LA Sparks. The Minnesota Lynx won their fifth straight behind a big game from Lexie Brown. And, led by their vets, the New York Liberty finally entered the win column.

A’ja Wilson turned in a MVP-caliber performance. So did Angel McCoughtry.

With a combined 50 points from the talented tandem, the Las Vegas Aces (4-2) took down the Los Angeles Sparks (3-3) on Friday night, 86-82. On the night before her birthday, Wilson finished with a game-high 26 points (going 11-of-19 from the field) and a team-high 11 rebounds. McCoughtry filled the box score, tallying 24 points, eight rebounds, five assists and three steals.

However, the Aces had to overcome a persistent Sparks team — one without Nneka Ogwumike and Seimone Augustus — to secure the victory.

A few minutes into the second quarter, the Aces had established a 12-point lead, driven by eight early points from Wilson. The Sparks then found their rhythm on both ends, much due to the effort of Sydney Wiese.

Getting the start for the second-straight game, Wiese converted her signature energy into effective basketball, fighting her way to the basket and draining shots from behind the 3-point line. Wiese had 16 first-half points. She would finish with 18 points, shooting a scorching 66.7 percent from the field.

Vegas’ thirteen first-half turnovers also allowed LA back into the game. At the half, the Aces held a one-point lead, 43-42.

Beginning in the third period, Candace Parker began to exert stronger influence on the scoring action. After a balanced first-half effort of six points, six rebounds, three assists and two blocks, Parker put in 14 second-half points. For the game, Parker compiled a MVP-level line herself — a team-high 20 points, a game-high 12 rebounds, four assists and three blocks.

But down the stretch, the No. 1 picks in the 2018 and 2019 WNBA Drafts — A’ja Wilson and Jackie Young — grabbed the game for the Aces. Wilson followed a quiet third quarter with an impactful fourth, scoring 12 points and snagging five rebounds. Young was a game-changer for Vegas throughout the second half. Playing with encouraging aggression, Young had 11 points and three assists after halftime. Her 15 total points contributed to the Aces’ 29 off-the-bench points; the Sparks only got 16 points from their reserves.

Nevertheless, the Sparks still had opportunities to take the game in the final minute. With the Aces holding on to a 3-point lead with approximately 20 seconds remaining, the Sparks had a four-on-five possession. But Chelsea Gray bonked an open pull-up jumper.

Although she had just hit two big shots for the Sparks, Gray, somewhat uncharacteristically, failed to make the play in the clutch moment. While she finished with 16 points, Gray continued to struggle with her shot, especially her 3-pointer. Gray missed all three of her 3-point attempts and shot 7-for-19, or 36.8 percent, overall.

Vegas then closed out LA from the line, with Kayla McBride and then McCoughtry both swishing a pair of game-sealing free throws.

Both teams are back in action on Sunday. At 3:00 p.m. ET, the Sparks meet their old rivals, the Minnesota Lynx. The game will be aired on ESPN 2. The Aces will go for a fourth-straight win against the no-longer-winless New York Liberty at 5:00 p.m. ET.

A career-high from Lexie Brown boosts the Minnesota Lynx over the Indiana Fever, 87-80

In her second game back from concussion protocol, Lexie Brown turned in a breakout performance for the Minnesota Lynx (5-1). She not only scored a career-high 26 points but also stuffed the entire box score, an indication of her impact on all aspects of the game. Brown had nine assists, six rebounds and four steals. If the Lynx continue to get such a performance from Brown — in combination with the all-round efforts from Sylvia Fowles (21 points, six rebounds, two blocks) and Napheesa Collier (16 points, five rebounds, four steals) — they can extend their current winning streak past five games.

For the Indiana Fever (2-4), Kelsey Mitchell and Tiffany Mitchell tied for a team-high 15 points. Kennedy Burke also added 14 points off the bench.

Led by their vets, the New York Liberty finally get their first win, besting the Washington Mystics, 74-66

New York Liberty (1-5) head coach Walt Hopkins rode his four veterans to his first career win. The foursome of Layshia Clarendon, Amanda Zahui B, Kiah Stokes and Kia Nurse all played more than 28 minutes and together tallied 48 points. Nurse led the scoring with 17 points, while Zahui B. grabbed a 14 rebounds and Clarendon tossed six assists.

The Washington Mystics (3-3) dropped their third straight game due to inefficiencies on the offensive end. As a team that relies on a high-scoring offensive system to win games, they must shoot better than 25 percent from 3-point range and 37.7 percent overall.

Post game reactions from the squad after tonight’s win. pic.twitter.com/qoAdmpYUA5