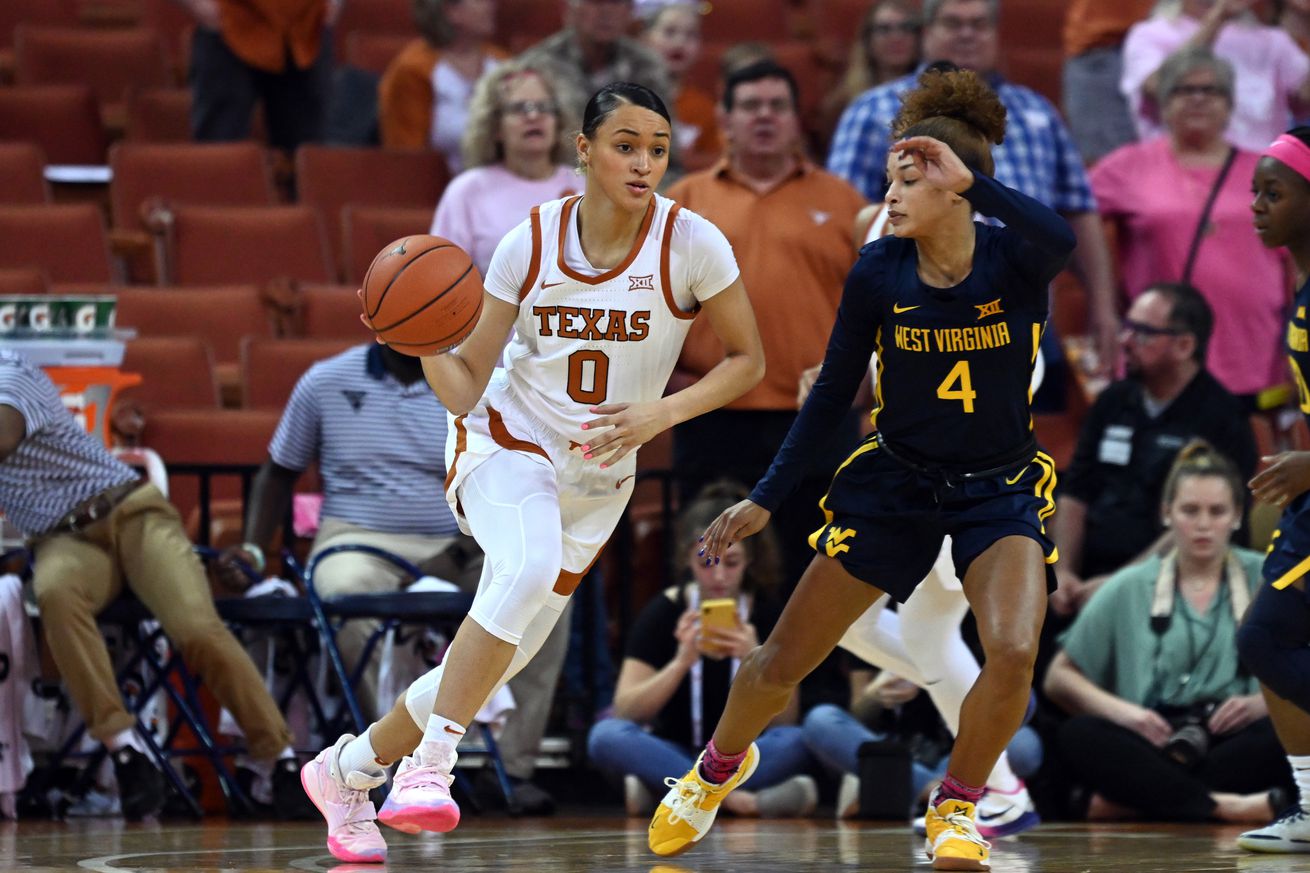 Celeste Taylor (with ball) has had an up-and-down season, but is currently on a hot streak. | Photo by John Rivera/Icon Sportswire via Getty Images

Celeste Taylor stepped up to lead the Texas Longhorns to their 10th conference win of the season, ensuring that the team will finish Big 12 play with a winning record. On the other side, Taylor Robertson of the Oklahoma Sooners made league history in defeat.

Freshman Celeste Taylor scored a season-high 27 points and Joyner Holmes brought the defensive energy necessary for the Texas Longhorns to defeat the Oklahoma Sooners by a score of 86-76 last night at the Frank Erwin Center in Austin, Texas.

Texas’ leading scorer, Charli Collier, was also in foul trouble, but still managed 14 points and 12 rebounds, while her frontcourt mate Holmes went for 16 points and six boards. Holmes also registered four steals and two blocks, all of which came in the first half.

Collier got Texas off to a good start with eight points in the first three minutes of the contest. She buried her second 3-pointer at the 7:10 mark of the first to give the Longhorns a 13-6 lead. However, Oklahoma fought back to tie the game at 23-23 after the first quarter.

The Sooners took their first lead of the game on a Gregory 3-pointer two minutes into the second. Shortly thereafter, Texas head coach Karen Aston was called for a technical foul and Gregory made both free throws to put Oklahoma up three.

Taylor started heating up after those free throws, tying the game with a mid-range make and then giving Texas the lead back on a triple with 4:39 remaining before halftime. Holmes’ defensive intensity late in the second helped Texas get to a 39-31 lead at the break.

Robertson, who committed three fouls in the first half, hit her 123rd 3-pointer of the season and second in the game exactly two minutes into the third. Williams was another bright spot for Oklahoma in the frame, scoring 10 of her team’s 17 points, but the Longhorns still went on to lead by as much as 16 in the third and by 14 entering the fourth.

The Sooners missed out on the opportunity to set the tone in the fourth because Robertson picked up her fourth foul just eight seconds in. She returned at the 7:01 mark, at which point it was an 11-point game, but a Taylor triple with 6:45 remaining pushed the Texas lead back to 14. Taylor finished with eight points in the final frame.

Texas took its foot off the gas late in the fourth and Williams brought Oklahoma within eight points on a layup with 1:15 to go. However, that was the closest the Sooners got in the fourth.

Texas, which is on the Big Dance bubble, helped its cause with the win, but still has to face the No. 2 Baylor Lady Bears on March 5. The Longhorns will then close out their season against the Oklahoma State Cowgirls and hope to improve their seeding with a strong showing in the Big 12 tournament.

Meanwhile, Oklahoma, which started its conference slate at 5-5, has now lost six games in a row.

Oklahoma travels to Forth Worth to take on the No. 25 TCU Horned Frogs at 7 p.m. ET on Wednesday, March 4. (Fox Southwest Plus/Sooner Sports Radio Network)