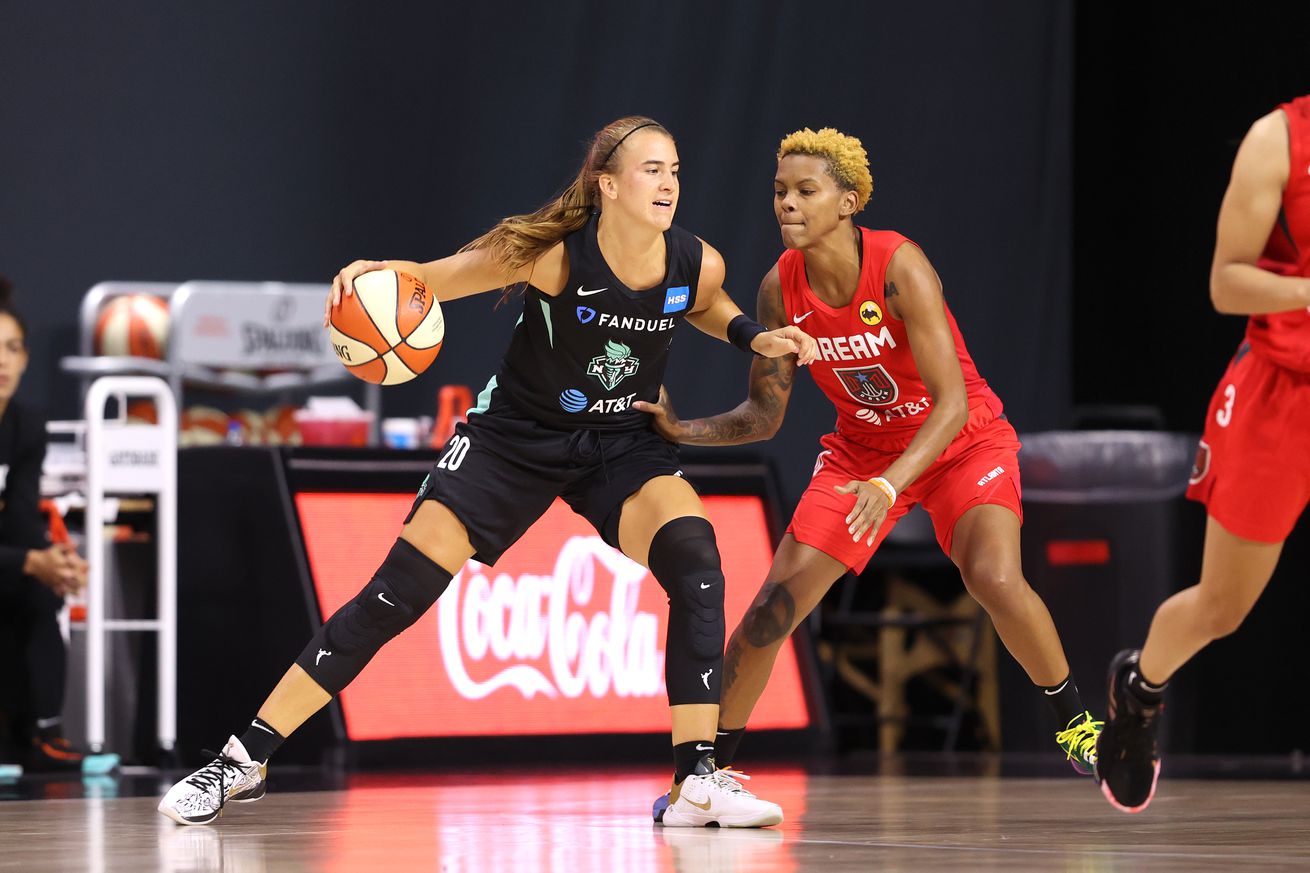 After losing Sabrina Ionescu to injury, the Liberty fought hard, but the Dream prevailed behind Betnijah Laney’s 30 points, 84-78. In other action, Satou Sabally had a double-double in a comeback victory for the Wings, while the Mercury’s “Big Three” came alive in a wire-to-wire win.

Add “ankles” to list of the New York Liberty’s 2020 frustrations.

Midway through the second quarter in the Liberty’s Friday night 84-78 loss to the Atlanta Dream, Sabrina Ionescu suffered what seemed to be a severely turned ankle. Ionescu exited the game, and then the “wubble.” As reported by ESPN, Ionescu was taken to a local hospital for an MRI.

Ionescu’s ankle injury follows that of Kia Nurse, who sprained her ankle in the season’s opening game. Nurse did not play Friday night.

Jazmine Jones, who dealt with ankle troubles during training camp, did play Friday night. Her play — 20 points on 60 percent shooting in 20 minutes of action — was one of several rookie-related silver linings for the Liberty.

However, the night belonged to Betnijah Laney. She was everything for the Dream, not only scoring a career-high 30 points but also filling the box score with eight rebounds, three steals and two assists.

Atlanta opens with strategy and energy

In the early going, the Dream appeared determined to erase their Wednesday evisceration at the hands of the Las Vegas Aces.

They opened a 12-0 lead by taking advantage of mismatches, with Shekinna Stricklen posting up Ionescu for the game’s first two baskets. Atlanta also played with energy on the defensive end, turning over the Liberty seven times in the first quarter.

Laney began with a bang, hustling her way to nine first-quarter points.

The and-1 from Betnijah Laney capped off a 12-0 run for the @AtlantaDream to start the game!

However, the Liberty would settle down and begin to work their way back into the game. The insertion of Kylee Shook proved a turning point. After hitting a baseline jumper, Shook had a pair of smart slips and scores. Her six first-quarter points helped New York cut into Atlanta’s lead, with the score sitting at 22-16 at the end of the period.

The debuts of the newest members of the Dream were also advantageous to the Liberty. Entering the contest midway through the first quarter, Courtney Williams was eager to get involved in the action, taking five pull-up jumpers in the first quarter. She only made one. However, she did seem to have her signature bounce in her step, as well as all her bravado. She played a total of sixteen minutes, going 2-of-10 from the field as she tallied six points, four rebounds, two assists and two turnovers.

Atlanta’s other newbie, Glory Johnson, appeared a step slow, both in her early stint and throughout her seven minutes of action. She scored two points on two shots.

The Liberty opened the second quarter by again going to Shook. Then, Ionescu, after an uneven first quarter, began to come alive. She not only drained a step-back 3-pointer, but also took a charge and snagged a transition steal. Her efforts allowed New York to take a 27-25 lead approximately three minutes into the quarter.

The game-changing gusto that she was playing with accentuated the misfortune of her ankle injury, which occurred with just over five minutes left in the first half. She ended with 10 points in 12 minutes of action.

When Ionescu went out, Layshia Clarendon immediately picked up the slack, using a sense of veteran insistence to prevent the Liberty from losing their momentum. Clarendon aggressively penetrated into the paint, taking their own shots and creating opportunities for others.

Atlanta, in contrast, began settling for jumpers, failing to put pressure on the New York defense through penetration and passing.

The Liberty thus took a 43-41 lead into halftime, led by Clarendon’s 11 points and three assists. Laney had 19 points at the break for the Dream.

Betnijah Laney WENT OFF in the 1st half, tallying 19 PTS! #ATTtipoff

The Liberty’s other rooks impress, but the Dream prevail behind Laney

Atlanta opened the second half ready to stall Clarendon, putting bodies in the paint to deter their drives.

On the other end, the Dream still failed to find their early-game sharpness. However, Laney continued to get buckets and make plays, allowing Atlanta to retake the lead and then extend it to 11 points.

But New York’s rookies prevented the game from getting out of hand. Jazmine Jones provided a spark on offense, showing off her scoring chops as she drained jumpers and got to the hoop. Jocelyn Willoughby chipped in some key baskets as she also made several plays on defense.

New York cut the Atlanta lead to 61-56 at the end of the third quarter. With approximately four minutes to go in the fourth, the combination of Jones and Willoughby willed the Liberty to within two points, 71-69.

Welcome to the #WNBA, @Jazmine_Jones4!

She's getting it done on both ends of the floor with 12 PTS, 2 STL & 2 BLK at the end of Q3 #ATTtipoff pic.twitter.com/d5jSvPVgsp

As noted above, Jones finished with 20 points. Willoughby had 14 points on 50 percent shooting. Clarendon finished with 16 points and 5 assists.

However, the Dream did enough down the stretch to hold off the Liberty. Chennedy Carter, who had an overall inefficient night, converted two big baskets before fouling out. For the game, she was 6-of-15 from the field, working her way to 17 points.

Courtney Williams then made her best play of the night. After rejecting a screen from Elizabeth Williams, C. Williams found E. Williams for an easy layup in the lane.

Elizabeth Williams was her solid self throughout the game, with 15 points and 10 rebounds, including her 1,000th career rebound. Monique Billings also did the dirty work necessary for the Dream to escape with the win, snagging 15 rebounds to go with her eight points.

Thank you! Long way from @SylviaFowles but I'm coming! https://t.co/VjkxbKtYbg

Appropriately, Laney sealed the game for Atlanta, hitting a final free throw to give herself a career-high 30 points and the Dream the 84-78 victory.

Both the Dream and Liberty are back in action on Sunday.

Sabally shines as Wings nip Fever for the 76-73 win

The No. 2 pick in the 2020 WNBA Draft showed off all her potential on Friday night.

Satou Sabally not only scored 23 points and grabbed 17 rebounds, both season highs, but also helped to captain Dallas’ second-half comeback. After the Wings trailed by as many as 14 points, Sabally scored seven points during a critical 14-3 run that began late in the third quarter and extended into the early fourth quarter.

She is the 1st rookie in @DallasWings franchise history to score 20+ points and grab 15+ rebounds in a game! #WatchMeWork pic.twitter.com/Oo8DFV738t

Phoenix fans can breathe a sigh of relief! The Mercury secured a wire-to-wire win over the Las Vegas Aces to avoid to falling to 0-3. Even more encouragingly, Diana Taurasi was in “GOAT” form, leading Phoenix with 22 points and 10 assists. Skylar Diggins-Smith also had 22 points, while Brittney Griner had 18 points and seven rebounds. The Mercury also drained 11 3-pointers.

The Aces were without Lindsay Allen, who has served as their starting point guard so far this season. Allen registered an “inconclusive positive” on a COVID-19 test. Per WNBA protocol, she must remain in isolation until registering two consecutive negative test results at least 24 hours apart. Danielle Robinson received the start in place of Allen.

Recap: A’ja and four other double-digit-scoring Aces too much for Mystics