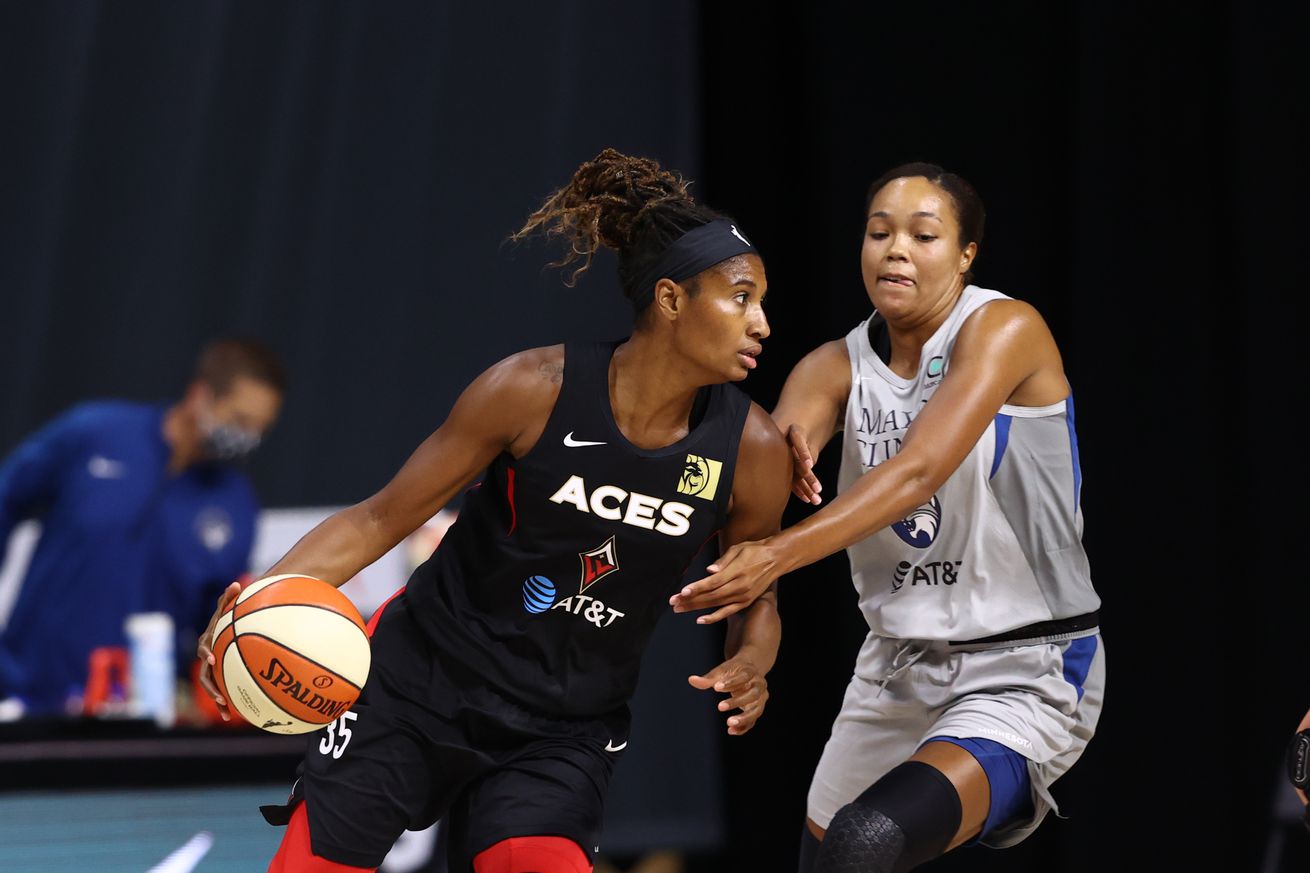 Angel McCoughtry turned in another vintage performance as the Las Vegas Aces won their sixth-straight game. | Photo by Ned Dishman/NBAE via Getty Images

The Las Vegas Aces (7-2) not only won their sixth-straight game. They also assumed sole control of second place in the WNBA standings, besting the Minnesota Lynx 87-77 and dropping them to 6-3. In other action, the Indiana Fever (4-5) held off the New York Liberty (1-8) while the Los Angeles Sparks (6-3) defeated the Washington Mystics (3-6) for their third-straight win.

The Las Vegas Aces, now with a 7-2 record, are in sole possession of second place in the WNBA standings thanks to their 87-77 victory over the Minnesota Lynx on Thursday. The win dropped the Lynx to 6-3 and gave the Aces the desirable double bye in the 2020 WNBA Playoffs.

The teams entered the game at 6-2, tied for the second spot in the standings.The Lynx, however, soon were dealt a disadvantage in the battle for the two seed when Sylvia Fowles’ calf troubles flared up less than two minutes into the contest, leaving the Lynx without their stalwart center.

Angel McCoughtry exploited Fowles’ absence for Aces, gliding to the basket to earn 11 first-quarter points and give the Aces a 27-22 lead after the first period. McCoughtry finished with 21 points, five rebounds and three steals.

Vegas also received an early boost from Jackie Young, who turned in another excellent, aggressive off-the-bench effort. With eight points in each half, Young again showed that she might be a threat to steal the Sixth Woman of the Year Award from teammate Dearica Hamby.

Although the Lynx entered the second half with a 55-37 advantage, they continued to fight and cut the deficit to 67-60 near the end of the third quarter. Napheesa Collier carried the load for her team, tallying her second double-double of the season with a season-high 21 points and a career-high 14 rebounds.

Crystal Dangerfield contributed to her Rookie of the Year case with 14 points.

.@PHEEsespieces was unstoppable on the glass tonight, grabbing a career-high 14 rebounds to go with a season-high 21 points! #WatchMeWork pic.twitter.com/Qy1hfznFq1

But the Aces had too much firepower and extended their lead into double digits en route to their sixth-straight win. | Box Score

Kayla McBride had her best game of the season. Even more encouraging than her 17 points was the pop she showed on both ends of the floor, snagging five steals and getting to the free-throw line eight times.

As has become the expectation for her this season, A’ja Wilson was awesome in another MVP-caliber line of 23 points, eight rebounds and four blocks.

A positive for Minnesota was the season debut of Odyssey Sims. Only four months after giving birth to her son Jaiden, Sims returned to the court and played 15 minutes.

Odyssey Sims is back playing in the @WNBA just four months after having her son.

The Aces seek their seventh-straight win and hold on second place when they meet the Washington Mystics on Saturday at 12:00 p.m. ET (ESPN 2). At 6:00 p.m. ET on Saturday, the Lynx face the New York Liberty (CBS Sports Network).

The Liberty’s vets did not allow their squad to quit. Entering the fourth quarter trailing by eight points, New York cut Indiana’s led to two points with just over a minute to go. However, an empty possession from the Liberty was followed by a clutch 3-pointer from Kelsey Mitchell, who had been held scoreless in the second half. Mitchell then iced the game at the free-throw line, swishing two freebies en route to the Fever’s victory.

Seimone Augustus and Riquna Williams own two of the most enviable, easiest jumpers in the WNBA. On Thursday night, the pair came off the bench and ignited the L.A. offense, with Williams scoring 10 first-half points and Augustus adding seven. From there, the Sparks rolled to their third-straight win, receiving contributions from up and down the lineup. Williams finished with a team-high 13 points.

Despite a 20-point performance from Ariel Atkins, the shorthanded Mystics dropped their sixth-consecutive game.