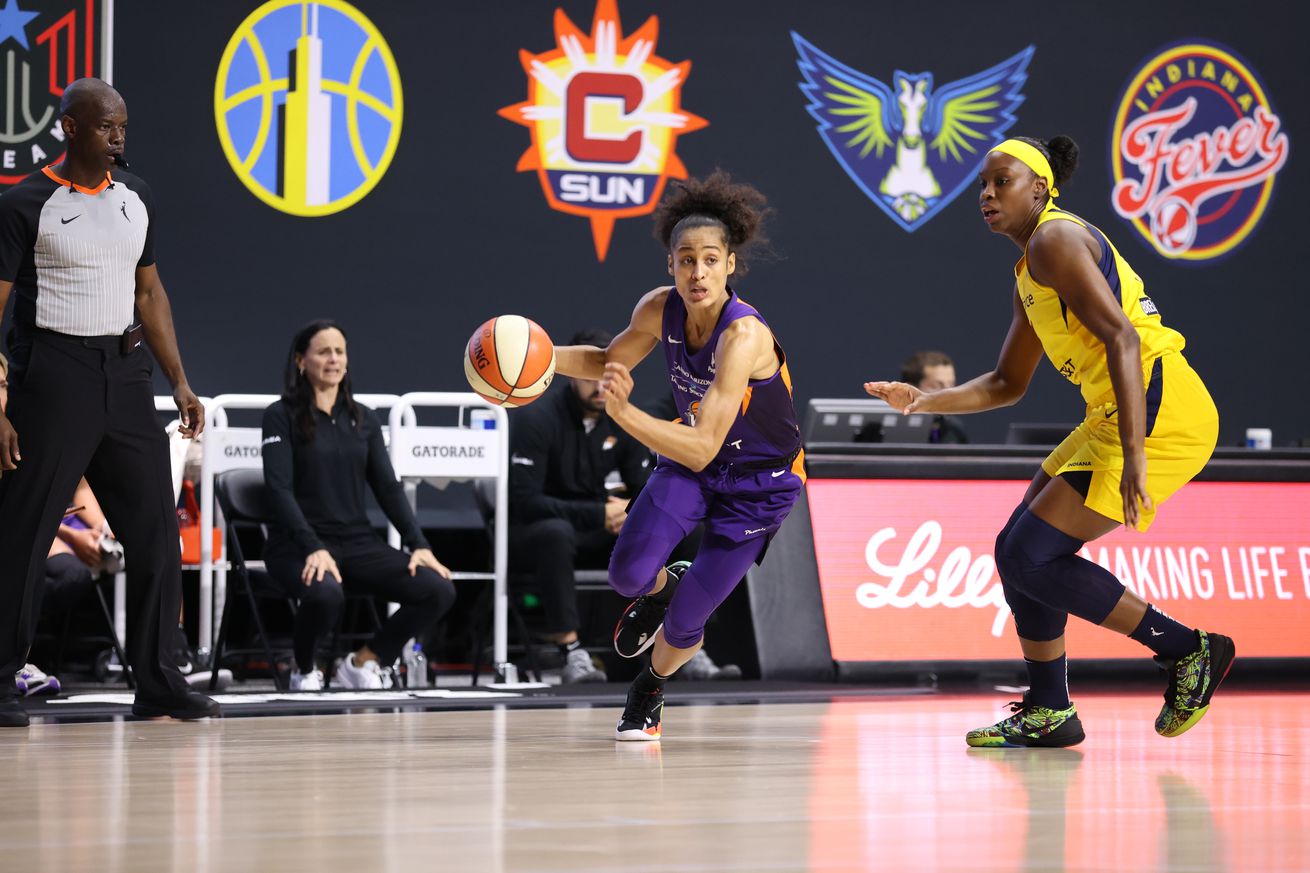 Skylar Diggins-Smith (with ball) was two assists shy of a double-double on Thursday night. | Photo by Stephen Gosling/NBAE via Getty Images

Skylar Diggins-Smith, Diana Taurasi, Brianna Turner and the 11-7 Phoenix Mercury overcame serious depth issues and notched a season-high 105 points in a blowout win over the 5-13 Indiana Fever. Plus, Courtney Williams of the 5-13 Atlanta Dream and Jackie Young of the 13-4 Las Vegas Aces led their teams to victories over the 2-15 New York Liberty and 8-10 Connecticut Sun, respectively.

The Phoenix Mercury have risen to the occasion in the face of adversity and now have the longest winning streak in the WNBA at five games.

Without Brittney Griner, who has left the bubble for personal reasons, and Bria Hartley, who tore her ACL and is out for the rest of the season, Skylar Diggins-Smith and Diana Taurasi have put the team on their backs.

The Mercury used a small, seven-player rotation on Thursday night, but still emerged victorious against the Indiana Fever, who saw 10 players take the court.

Diggins-Smith led Phoenix with 28 points in the 105-81 win at IMG Academy in Bradenton, Florida, but what Taurasi has accomplished of late is even more impressive. The 38-year-old guard has set a WNBA record with 28 triples over the past five games and tied a career high with eight on Thursday night. She has averaged 26.0 points during that stint and has surpassed Breanna Stewart for third in the WNBA in scoring average for the season with 19.7 points per contest.

Diana Taurasi’s 28 threes in a 5-game span is a new #WNBA record. pic.twitter.com/PHlXh37uIl

What may be the most impressive thing about Taurasi recently is that she is scoring a lot of her points (19.3 per game over the last three contests) in the first half to help her team build momentum early.

In addition to her scoring, Diggins-Smith dished out a game-high eight assists while Brianna Turner stepped up with 16 points, 12 rebounds and six blocks. The two of them, along with Taurasi, set the tone for the game and have the Mercury dreaming of bigger and better things. The team clinched a playoff spot with the win and are now tied with the Chicago Sky for fifth place.

Kelsey Mitchell had 16 points while Candice Dupree chipped in with 14 to go along with her five assists and four rebounds for the Fever, who lost their WNBA-high sixth-straight game. They are currently in a three-way tie for ninth place and are 1.5 games out of the playoff picture.

The Fever’s next game is at 4 p.m. ET on Saturday against the seventh-place Connecticut Sun, a team that they are likely not going to catch seeing as they are three games behind with four games to play for both teams. However, Indiana could still catch the 6-11 Dallas Wings and snag eighth place so they have a lot to play for. The Mercury also play on Saturday (8 p.m. ET) as they look for their sixth-straight win when they face the New York Liberty (2-15).

Williams had another one of her big rebounding nights with 13 boards to go along with 15 points. Leonna Odom cut Atlanta’s lead to four with free throws at the 46.5 second mark, but a Betnijah Laney layup with 24.9 ticks left sealed the win. Elizabeth Williams blocked six shots for the Dream in the low-scoring affair.

Jackie Young had 20 points, nine assists and four steals for the Aces while her teammates A’ja Wilson and Dearica Hamby scored 24 and 20 points, respectively. Hamby added four steals and Wilson registered three blocks. Sun rookie Beatrice Mompremier had a monster game on the boards with 16 rebounds — her previous career high was six — as the Sun out-rebounded the Aces 41-23 in defeat.