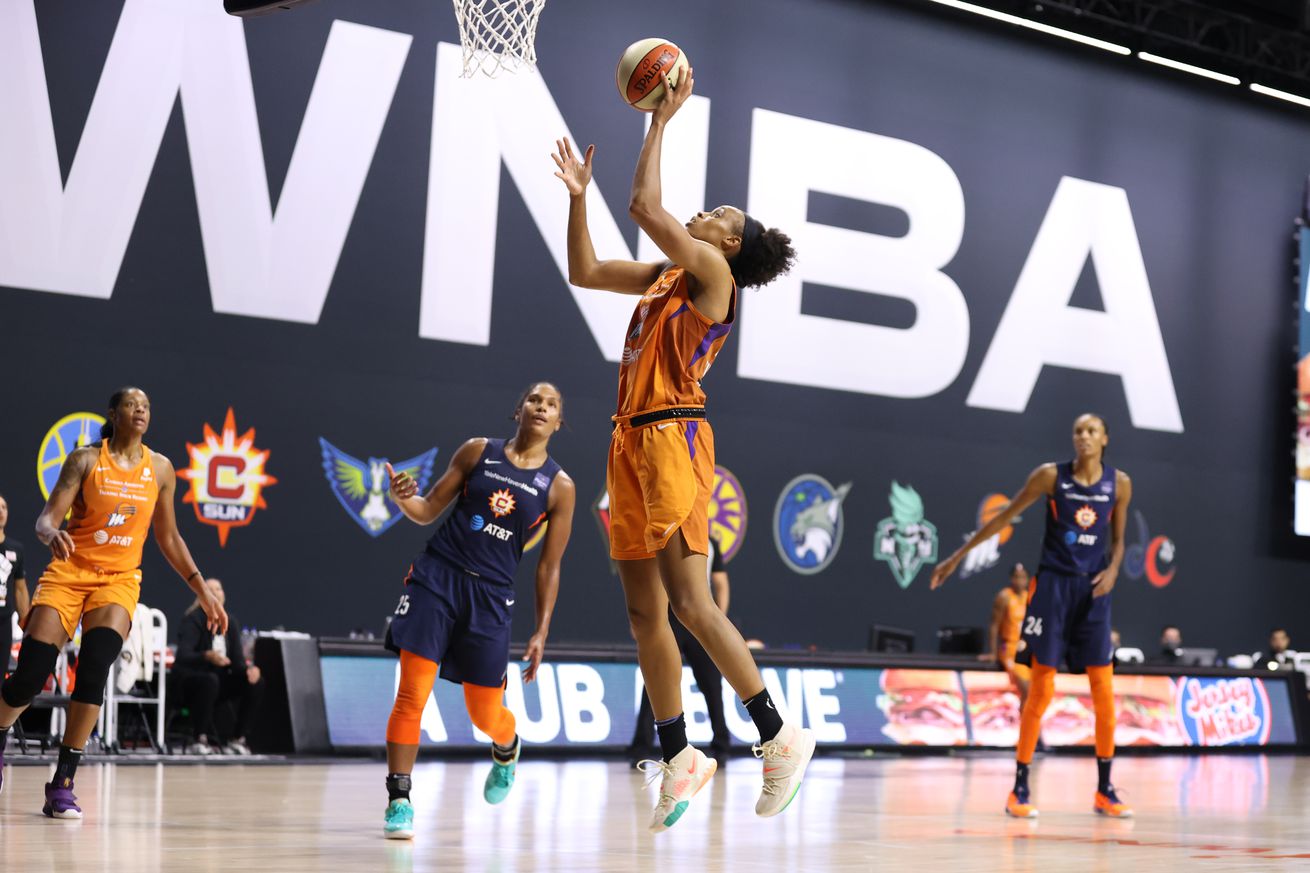 Brianna Turner, who wears #21 for the Phoenix Mercury, pulled down a franchise-high 21 rebounds in a late-regular season win against the Connecticut Sun on Sept. 9, 2020, at IMG Academy in Bradenton, Fla. | Photo by Stephen Gosling/NBAE via Getty Images

With a franchise-high 21 rebounds on Wednesday, Brianna Turner helped the Phoenix Mercury survive the Connecticut Sun’s second-half surge for an overtime win and split the regular-season series 1-1. Also, the Atlanta Dream added to the Chicago Sky’s nightmarish late-season dive and the Seattle Storm stayed hot against the eighth-seed clinging Dallas Wings.

For second-year player Brianna Turner, the Phoenix Mercury’s win against the Connecticut Sun in an overtime thriller was an out-of-body experience, for reasons both good and bad.

“My soul literally left my body,” Turner said of a DeWanna Bonner 3-pointer with 6.5 seconds left in regulation, to give the Sun a one-point lead. “And then when Sky(lar Diggins-Smith) hit that three to send us into overtime, my soul came back and I was just so relieved.”

After Bonner’s clutch move, Diana Taurasi and Shey Peddy made mistakes that seemed to finish Phoenix’s night: an out-of-bounds turnover with just under four seconds left in regulation (Taurasi) and a shooting foul resulting in two made free throws by Bonner for a three-point Connecticut lead (Peddy). But Diggins-Smith, who Turner said is “one of the most passionate teammates I’ve ever had,” had other ideas: a buzzer-beating 3-pointer and overtime.

The naturally-humble Diggins-Smith credited the trust and faith Taurasi and Mercury head coach Sandy Brondello have in her for giving her the confidence not only take the shot, but to make it. She also praised the Sun’s formidable efforts. “This (Sun) team is better than what its record shows,” she said. “This is a good team. They’ve got great players. They’ve got great posts inside. They’re very aggressive defensively.”

It is the Mercury’s own defense — of which Turner is a very big part — that shut down the Sun’s offense for a dominant 30-13 first-quarter showing, a 21-18 advantage in the second quarter and a 51-31 lead at the half.

The second half was a different story, however, and Diggins-Smith said her team got it done with “heart, energy” and a willingness to do whatever it takes to win amid challenging circumstances, which included suiting up just seven players on Wednesday and some of those players needing to play out of position. Getting it done — especially after losing to the Sun on Monday — was a perfect test of the Mercury’s postseason mettle.

“Going into the playoffs, records don’t really matter so it’s just about playing with heart and leaving it all on the floor,” Diggins-Smith said.

Taurasi, too, spoke after the game about using the second half as a test of their postseason readiness, especially with the team now navigating a depleted lineup due to injuries and a key departure.

“A couple of weeks ago we were sitting in the locker room, like, ‘now what?’ — concerning some things that we had to go through,” Taurasi said. “But you have two choices — you can either give in or you can just fight. And I keep telling them: The 40 minutes are going to end regardless, whether you’re scared, whether you play aggressive, or whether you play tentative. The 40 minutes are going to be played. Tonight showed what kind of team we can be — in the first half, when things were clicking.”

The Sun, however, were keen to grind the Mercury’s gears in the second.

“We were hitting on all cylinders and looking pretty,” Taurasi said. “In the second half, we knew it was going to be a different story.”

“That’s a team that’s going to be there in the playoffs for a while,” she added. “They’re a really, really, really tough team. They’re really good and they’re hitting their stride right now. And the way that they came at us in the second half, we looked at each other, like, ‘This is a time when we’re going to find out whether we want to be here or not.’”

Now that the Mercury proved to the rest of the league and to themselves that they want postseason success, they know who to reply upon as a difference-maker moving forward: Turner, whose 21 rebounds on Wednesday were a Mercury franchise high. Her performance did not go unnoticed by Taurasi, the WNBA’s all-time leading scorer.

“If she’s not Defensive Player of the Year, she’s definitely (All-Defensive) First Team,” Taurasi said. “We throw her at every best player (the Sun) have and she’s just relentless.” Taurasi also agreed that Turner should be considered for Most Improved Player, too.

Award or no award, Turner’s breakout performance was a product of self-motivation.

“Last game, I was just really disappointed in my performance,” Turner said, of the Mercury’s 15-point loss to the Sun on Monday. “After the game, I was like, ‘That was pretty pathetic — defensively, offensively.’ So this game I wanted to focus on defense a lot — rebounds. So, yeah, defensive rebounds were my priority tonight — rebounding and outlet-ing quick.”

The Sun will have to contend with an Atlanta Dream team that is still scrapping for a playoff spot and coming off a dominant win over the Chicago Sky on Wednesday, which dropped the Sky from fifth in the standings to sixth. | 7 p.m. ET, Facebook and Fox Sports Southeast (Atlanta).

The Mercury will have their hands full against the Seattle Storm (17-3) and the momentum of their six-game winning streak. | 10 p.m. ET, CBS Sports Network and JoeTV (Seattle).

It may be a long shot, but the Dream’s playoff hopes remain alive thanks to a dominant win over the sliding Sky. And if they keep up the team effort of Wednesday night, they have a chance to contend against the best teams in the league. Betnijah Laney scored a game-high 24 points and grabbed 10 rebounds for a double-double. Courtney Williams (20 points and 10 rebounds) and Elizabeth Williams (11 points and 10 rebounds) also recorded double-doubles. Rookie star Chennedy Carter added 16 points and Blake Dietrick contributed 15 points off the bench.

Courtney Vandersloot scored a team-high 22 points in Chicago’s loss and pulled down 11 rebounds to make it a double-double. The only other Sky players to score in double figures were Kahleah Copper and Allie Quigley, who had 17 apiece, and Gabby Williams, who added 12 points off the bench.

A balanced effort by the Storm, including all five starters with double-figure scoring, secured the steady win. Breanna Stewart’s 23 points and 11 rebounds made the only double-double for the game and Alysha Clark scored 14 points on 5-of-7 shooting from the field that included 3-of-3 made shots from deep.

Satou Sabally, with 25 points, finished with the game high in scoring for a Wings team that looked confident, led after the first quarter and lost the remaining quarters by two points, six points and five points, respectively.