By Zachary Ward on Wednesday, September 9, 2020 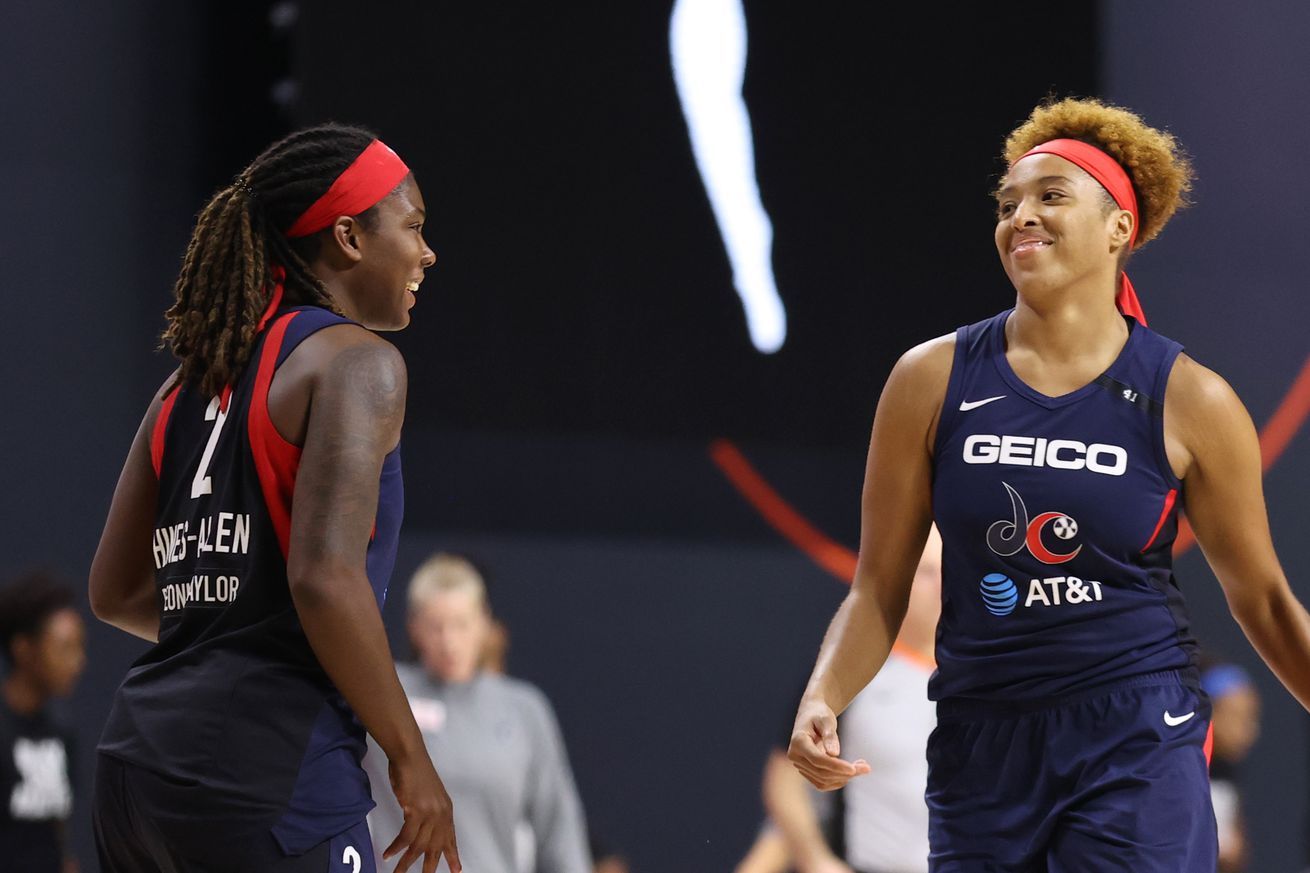 Myisha Hines-Allen (left) and Tianna Hawkins have helped keep the Mystics alive in the playoff race. | Photo by Stephen Gosling/NBAE via Getty Images

Led by Myisha Hines-Allen’s 26 points and nine rebounds, the 6-13 Washington Mystics overcame their previous offensive struggles against the 13-7 Minnesota Lynx and recent history of heartbreaking losses with an important 89-86 win. Plus, the 15-5 Los Angeles Sparks blew out the 2-17 New York Liberty and the 15-4 Las Vegas Aces remained ahead of LA by holding on to defeat the 5-15 Indiana Fever.

When the Minnesota Lynx in-bounded the ball in the backcourt with 0.1 seconds remaining on Tuesday night against the Washington Mystics, they did not attempt a shot. It was the tiniest symbolic reprieve imaginable, but the Mystics will take it after all they’ve been through this season.

The squad, led by Myisha Hines-Allen’s 26 points and nine boards, walked away with an 89-86 victory over the Lynx at IMG Academy in Bradenton, Florida, improving to 6-13 and pulling to within one game of the Dallas Wings for the eighth and final playoff spot in the WNBA Playoffs.

The Mystics were coming off an overtime loss to the Wings that, if they’d won, would have placed them in a battle for playoff position versus the Lynx.

“We can’t hang our heads on that loss to Dallas even though we really needed it,” Hines-Allen said after Tuesday’s win. “‘(It’s like) alright, next one. Let’s try to continue to surprise people and make this playoff push because it’s still possible.’”

With 0.9 seconds remaining on Tuesday night, Lynx point guard Crystal Dangerfield drove to the basket for a quick two instead of taking a potential game-tying 3-pointer. With 0.1 seconds to go, the Mystics’ Tianna Hawkins was fouled and knocked down her fifth and sixth free throws of the night. Her two makes proved to be the game-winners.

“Ariel (Atkins) and Leilani (Mitchell) and Emma (Meesseman), Myisha and Tianna — they’re used to winning,” Mystics head coach Mike Thibault said of his core group of leaders. “They don’t want to be in the situation they were at the end (against Dallas). They came in ready to play.”

The Mystics led by as many as 12 points in the first quarter with Hines-Allen scoring 13 in that frame. They then went up by seven at halftime before weathering a storm in the form of a 29-19 edge for the Lynx in the third. Kiara Leslie scored five points for Washington during an 8-0 run to start the fourth after which the team never trailed.

Atkins and Meesseman each scored 18 points in the contest, and Napheesa Collier led the Lynx with 21 points and hauled in 11 rebounds for a double-double. Dangerfield finished with 20 points and seven assists.

The Lynx and Mystics will be in action again on Thursday, Sept. 10, at 8 p.m. ET and 10 p.m. ET, respectively. Minnesota will be taking on the second-place Las Vegas Aces but without the chance to compete for a double-bye. Washington will face the Los Angeles Sparks who are one-half game behind Las Vegas and still have a chance to pull into first place ahead of the Seattle Storm.

Ogwumike, Parker and Williams led the Los Angeles Sparks to an easy 96-70 win over the New York Liberty | Box Score

Nneka Ogwumike notched 20 points, eight rebounds and five assists and Candace Parker added 14, five and seven. Riquna Williams also scored 20 points for the winners while rookie Jocelyn Willoughby scored a career-high 21 points in New York’s defeat. The Liberty attempted 35 shots from 3-point range and made 12 of them; the Sparks were a more efficient 8-of-19 from beyond the arc.

A’ja Wilson, whose advantages in free-throw shooting and rebounding made the difference for the Aces, went all-out on the glass with 16 rebounds to go along with her 22 points. Vegas made 26 free throws to Indiana’s eight and won the battle on the glass 42-28. Angel McCoughtry was 11-of-12 from the charity stripe for the Aces and Kelsey Mitchell scored a game-high 24 points for the Fever, which cut her team’s deficit to four points with 1:01 minutes remaining.

♥️ Play of the Game ♣️@_ajawilson22 with the big rejection #ALLIN ♦️♠️