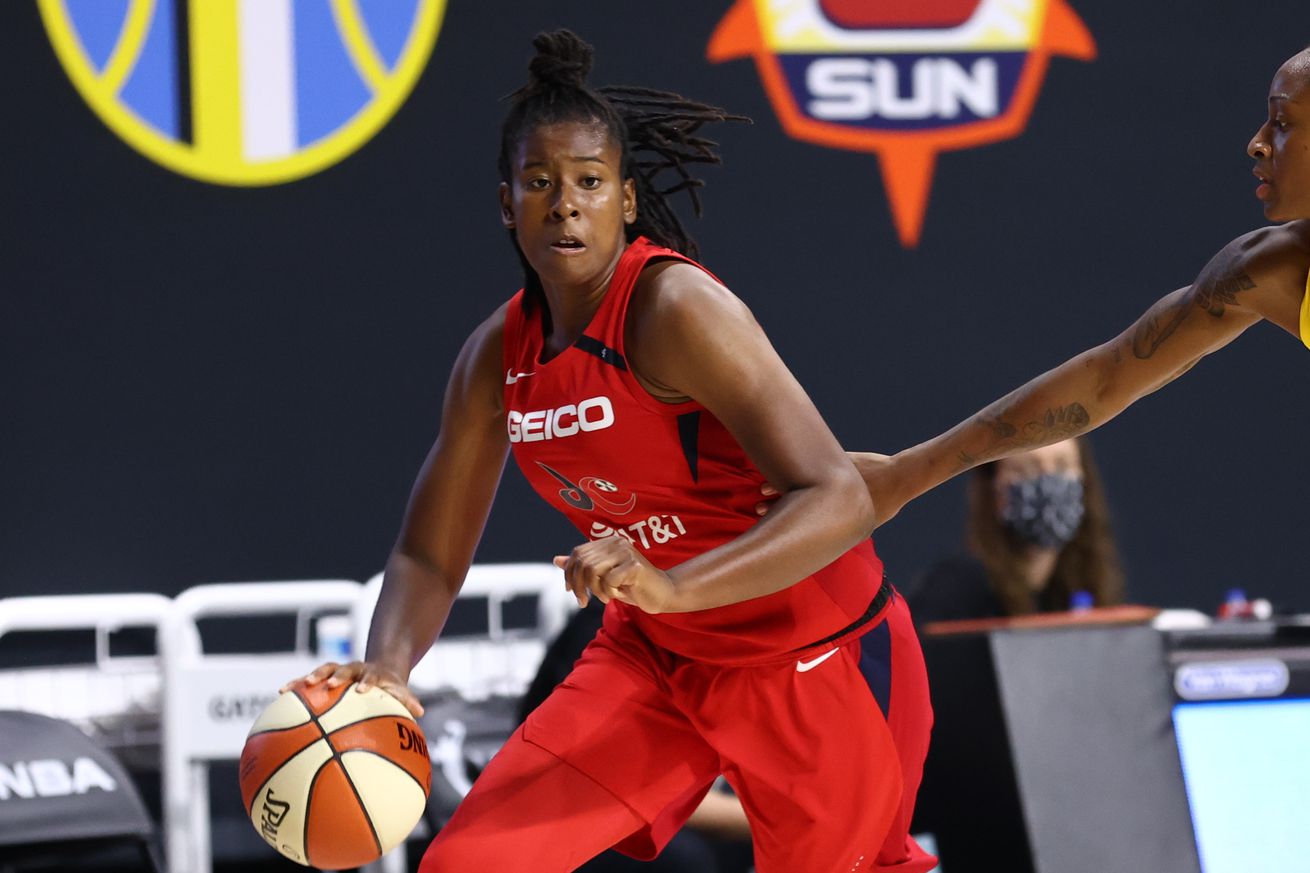 Ariel Atkins has been a steady offensive force for Washington the past two seasons. | Photo by Ned Dishman/NBAE via Getty Images

Ariel Atkins dropped 22 points on her 24th birthday in the Washington Mystics’ third-straight win of the 2020 season. Missing four key players, D.C. still managed to thwart the league-favorite Seattle Storm. Also on Thursday, the Minnesota Lynx eked a win over the Chicago Sky and the Los Angeles Sparks used a balanced scoring effort to take down the Connecticut Sun.

Down four key players? No problem.

At 3-0, the Washington Mystics stand alone as the last of the undefeated teams in the 2020 WNBA season. An 89-71 rout of the Seattle Storm (2-1) on Thursday at IMG Academy in Bradenton, Florida, got it done.

The Mystics received a game-high 22 points from guard Ariel Atkins, who also matched a career-high five 3-pointers (on 10 attempts) on her 24th birthday.

Washington jumped out to a 21-14 lead after the first quarter and maintained control with a 50-32 lead at halftime, before playing even with Seattle in the second half. The Mystics made more 3-point shots (10) in the first half than 2-pointers (eight), for a scorching 62.5 percent shooting from beyond the arc at the break. They finished 15-of-32 from deep, with contributions also coming from Leilani Mitchell (4-of-6), Essence Carson (2-of-3) and Kiara Leslie (2-of-4).

The Storm, whose roster closely resembles the one that won the WNBA championship in 2018, did make a comeback effort in the fourth quarter and cut Washington’s lead to 12 points with 4:40 remaining in regulation. But that effort was silenced by Atkins, who converted on a four-point play with 4:21 remaining. At the 3:45 mark, she threw in a dagger from deep, her fifth.

We wouldn’t giver her that space, but we don’t want to tell you what to do.

Atkins with her of the game pic.twitter.com/zj6rRd9OK0

“I wasn’t trying to hit a big shot,” Atkins said. “I was just trying to make sure I was taking an open shot and doing what my team needs. … It feels good to get a win against such a good team.”

The Mystics’ starters made the biggest overall contributions. In addition to Atkins’ high-scoring night, Myisha Hines-Allen had 17 points, seven rebounds and five assists. Mitchell was good for 12 points and game highs in assists (six) and steals (four). To round out the starting lineup, Emma Meesseman had 10 points, five rebounds, four assists and three steals, while Aerial Powers had nine points, eight boards and four assists.

“It helps if you have good people to start with,” Mystics head coach Mike Thibault said of his team’s chemistry through three games. “I think that’s the biggest thing. … They truly do love each other. We’ve had that for the last couple years and this group’s no different.”

“To be honest, I’m really surprised,” Meesseman offered with regards to the chemistry. “In practice when we played five-on-five we were kind of struggling sometimes and we were like ‘how are we going to do this against the other teams?’ … We’ve played three games so far and every game’s been a little better.”

Seattle’s Breanna Stewart had 10 rebounds and scored 15 points but was 1-of-5 from distance. Her team was 5-of-25 from beyond the arc and had 18 turnovers to the Mystics’ eight.

On Saturday, the Mystics will face the Chicago Sky, who were undefeated entering Thursday’s matchup with the Minnesota Lynx but fell to 2-1.

The Storm will take on the Sparks on Saturday in a battle between 2-1 teams who entered the season as two of the best in the West (at least on paper).

Lynx nearly blow 12-point fourth quarter but hang on to top the Sky, 83-81

Napheesa Collier went for 20 points and 10 rebounds to lead the now 2-1 Lynx, who lucked out when Chicago missed three layups in the final seven seconds of the contest, all of which would have tied the game. Courtney Vandersloot missed the first (a difficult reverse layup), and the second, before Gabby Williams missed the third: a desperation bank-shot from a little further out with 0.3 seconds remaining.

Chelsea Gray had 15 points to lead four Sparks in double figures, while Candace Parker chipped in 10 points and 11 rebounds. The game wasn’t as close as the final score indicates — the Sparks had a comfortable lead for most of the fourth quarter. DeWanna Bonner had another spectacular performance with 34 points, 14 rebounds and six assists in defeat, while her Sun teammate Alyssa Thomas nearly registered a triple-double with 10 points, 18 rebounds and eight assists. Connecticut is winless through three games.