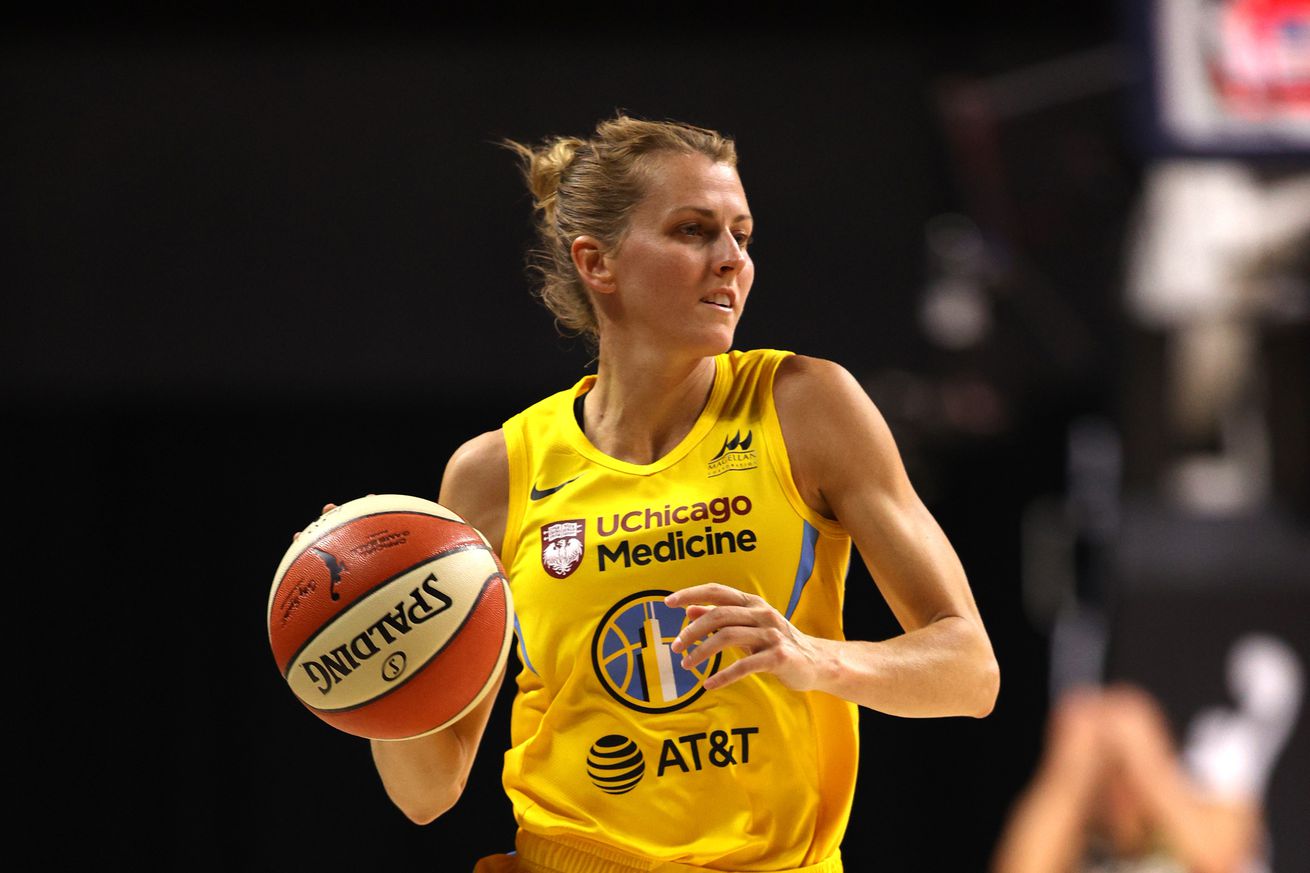 Allie Quigley scored 10 points and hit the game-winner for the Chicago Sky in the team’s 2020 season opener. | Photo by Ned Dishman/NBAE via Getty Images

Allie Quigley hit a late 3-point shot to help the Chicago Sky beat the Las Vegas 88-86 in the teams’ season opener. Also on Sunday, the Minnesota Lynx used a big fourth quarter to overcome the Connecticut Sun and the Atlanta Dream won a shootout over the Dallas Wings.

The WNBA’s 2020 opening weekend concluded on Sunday with three games featuring reconstructed rosters, exciting rookies and a tight finish. The Chicago Sky and Las Vegas Aces faced each other in the second matchup and provided what turned out to be the most entertaining competition of the day.

The matchup was highly anticipated — the Sky and Aces last met in a highly-contested second-round playoff battle in 2019 that ended on a half-court heave by Dearica Hamby to give the Aces the victory.

The rematch was no let down.

Although the Aces started in control, led for much of the way and opened up stretches of double-digit leads, as large as 12 points, the Sky refused to be put away. Chicago clawed their way back into the fray, on their way to the 88-86 victory.

Kaleah Copper scored 15 of her team-high 18 points in the second half, an apparent bid to kept the score close enough to allow the Sky to make their comeback. Gabby Williams came off the bench to score 14 points, shooting 6-of-8 from the field. Newcomer Azurá Stevens scored 12 points in her Sky debut. Courtney Vandersloot scored three straight baskets at the end of the second quarter and finished with eight points and 11 assists for the game.

The Sky’s biggest shot of the game was made by Allie Quigley, who hit a 3-pointer with 15.3 seconds left in regulation to the give the Sky their largest lead of the game: two points. It was enough to seal the Sky’s first victory of the 2020 season. Quigley finished with 10 points.

The Aces dominated in the paint, outscoring the Sky 46-26. Yet, Las Vegas was the only team without a made 3-point shot in the league during season-opening weekend (the Aces also ranked last in 3-point shot attempts in 2019).

Both teams will want to clean up the turnovers moving forward. The Aces recorded 17 lost possessions and the Sky had 16.

After one day of rest, the Sky will face the Los Angeles Sparks on Tuesday — a team flexing early championship- contending muscle. The Aces also will play again on Tuesday, against the Atlanta Dream, who won their first game of the season on dominant scoring.

The Sun held the lead throughout most of the game and it swelled to as large as 11 points in the third quarter.

However, the Lynx dominated in the fourth quarter and outscored the Sun, 27-12, and held the Sun to 4-of-18 shooting for the period. Sylvia Fowles controlled the game, scoring 17 points and recording 18 rebounds.

Napheesa Collier had an impactful game, scoring 11 points and contributing eight rebounds before fouling out with just over a minute left in the game.

Crystal Dangerfield, a second-round pick in 2020 draft, scored seven of her 10 points in the fourth quarter of her WNBA debut.

The Lynx probably cannot bank on one strong quarter to see out victories, though. They will need more even play to stay consistently on the winning side.

The Sun’s Alyssa Thomas led all scorers with 20 points; newly-acquired DeWanna Bonner was just behind her with 19 points. The Sun shot 2-of-19 from beyond the arc, including 0-of-6 by Bonner. After a hot, fast-paced start, the Sun appeared to run out of gas down the stretch. Fans will hope that their conditioning improves over the course of the season.

The Atlanta Dream have rebuilt the roster that made the semifinal-round of the 2018 WNBA Playoffs while the Dallas Wings are the youngest team in the WNBA.

The Dream’s starters scored 100 of the team’s 105 points, led by Monique Billings’ 30 points — plus 13 rebounds for her second career double-double — in just her third career start. Betnijah Laney, new to the Dream this season, also found a career-high, with 19 points.

Rookie Chennedy Carter scored 18 points in her professional debut and contributed eight assists and five rebounds. But efficiency was a problem: Carter shot 5-of-16 from the field and finished 0-of-4 from deep, something that will need to improve going forward.

As the season moves on, it will be interesting to see how the Dream perform against stiffer competition. They are unlikely to shoot 54.8 percent in every contest.

@ChennedyCarter with the shake & bake!

For the Wings, defense was more the issue than the offense. Arike Ogunbowale scored 19 points, as did Allisha Gray, off the bench. Isabelle Harrison scored 18 points, tying her season-high in 2019. Rookies Satou Sabally and Tyasha Harris made positive impacts. Sabally finished with 11 points, five assists and five rebounds before fouling out with four minutes left in the game.

Harris contributed 13 points and four assists off the bench. The Wings clearly have talent, but they will need to put in work on the defensive end to get into the “win” column.