Recap: Sparks use huge third quarter to run past Mercury 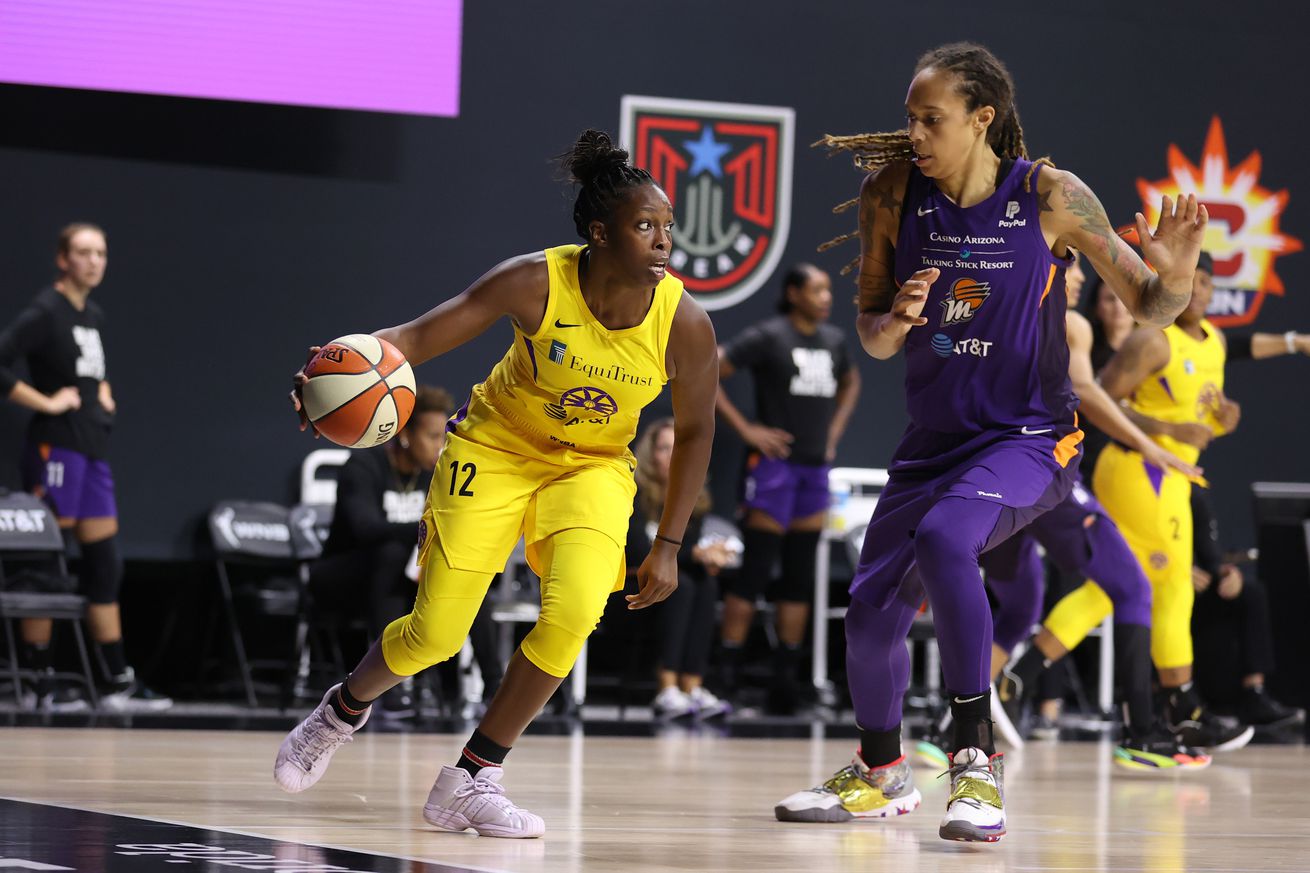 Chelsea Gray (left) led the Sparks with 7 assists in under 20 minutes of play. | Photo by Stephen Gosling/NBAE via Getty Images

The Los Angeles Sparks and Phoenix Mercury went blow-for-blow in the first half of their season-opening matchup, but the game wasn’t nearly as close the rest of the way, with LA pulling away for a 99-76 win. Saturday’s other two games — featuring wins by the Seattle Storm and Washington Mystics — also had large margins of victory.

The WNBA finally began its 2020 season on Saturday, featuring a slate of three games held at a remote location in Bradenton, Florida. Each game featured compelling storylines, from a much-heralded rookie facing off against a living legend to the defending WNBA champions seeking to overcome the adversity of an entire starting lineup lost to opt-outs and free agency.

Saturday’s middle game showcased two teams expected to be championship contenders — the Los Angeles Sparks and the Phoenix Mercury — and was thus its most competitive, at least initially.

The Mercury entered the season with big aspirations fueled by a productive free agency period and the newfound health of their franchise player, Diana Taurasi, who missed much of 2019 with nagging injuries. The Sparks, meanwhile, will be thinner in 2020 than initially expected with both Kristi Toliver and Chiney Ogwumike choosing to forgo the season, but remain formidable due to their balanced starting lineup and championship pedigree.

For twenty minutes, the game was as advertised. The Mercury overcame early foul trouble from All-WNBA center Brittney Griner to compete in a fast-paced contest with the Sparks, who got big contributions from forwards Candace Parker and Nneka Ogwumike early. The Mercury’s big offseason addition, point guard Skylar Diggins-Smith, made several key plays to keep her team afloat.

The second half, however, was one-sided. After leading 50-46 at halftime, the Sparks opened an enormous lead in the third quarter, outscoring the Mercury 30-8 in the frame and essentially turning the fourth quarter into garbage time. N. Ogwumike put forth a stellar performance, scoring 21 points on a perfect 8-for-8 shooting from the field, and Sparks head coach Derek Fisher was able to go deep into his bench as his team’s lead swelled — a luxury most WNBA coaches will be seeking during the season’s compact, strenuous schedule.

As the Sparks caught fire, the Mercury flamed out. Phoenix shot 38.5 percent from the field in the second half (not nearly good enough to keep pace with Los Angeles, which shot 62.5 percent) and struggled to establish much of a rhythm on either end of the floor. The Mercury turned the ball over an astounding 27 times as their bench failed to match the production of the Sparks’, allowing a sizeable deficit to become unmanageable.

For as poorly as the Mercury played in the second half, however, the Sparks were excellent. Fisher got good minutes from reserve guards Sydney Wiese and Te’a Cooper, while veteran Seimone Augustus was splendid in her Sparks debut, shooting 6-for-6 from the field with a pair of 3-pointers. Such play made a statement to future Sparks opponents: Despite the losses of Toliver and C. Ogwumike, Los Angeles is still plenty deep enough to compete for a title.

There’s not going to be much turnaround time during the 2020 season due to its condensed schedule. The Sparks will be back in action on Tuesday when they take on the Chicago Sky.

The Mercury, meanwhile, will get a much-needed extra day to fine-tune things. They’ll play next on Wednesday, taking on an Indiana Fever team that didn’t fare much better in its opener.

All eyes were on 2020’s No. 1 overall pick, Sabrina Ionescu, in the first game of the day, but perhaps they should have been on Seattle instead. The Storm, who welcomed 2018 MVP Breanna Stewart back from an Achilles tear and legendary point guard Sue Bird back from knee troubles, blitzed Ionescu and the young Liberty with an aggressive defense that forced 19 turnovers. Stewart led Seattle with 18 points, 8 rebounds and 4 steals while Layshia Clarendon scored 20 for New York.

The 2019 champion Mystics look quite a bit different than they did last season after losing Elena Delle Donne, Natasha Cloud and LaToya Sanders to opt-outs and Toliver to free agency. Washington’s offense didn’t skip a beat, however, putting up an offensive rating of 118.8 and taking full advantage of a sluggish Fever team that looked every bit the one that arrived in Bradenton later than the rest. Myisha Hines-Allen seized the frontcourt opportunity left by Delle Donne and Sanders, scoring 27 points and pulling down 10 rebounds in 29 minutes of play.