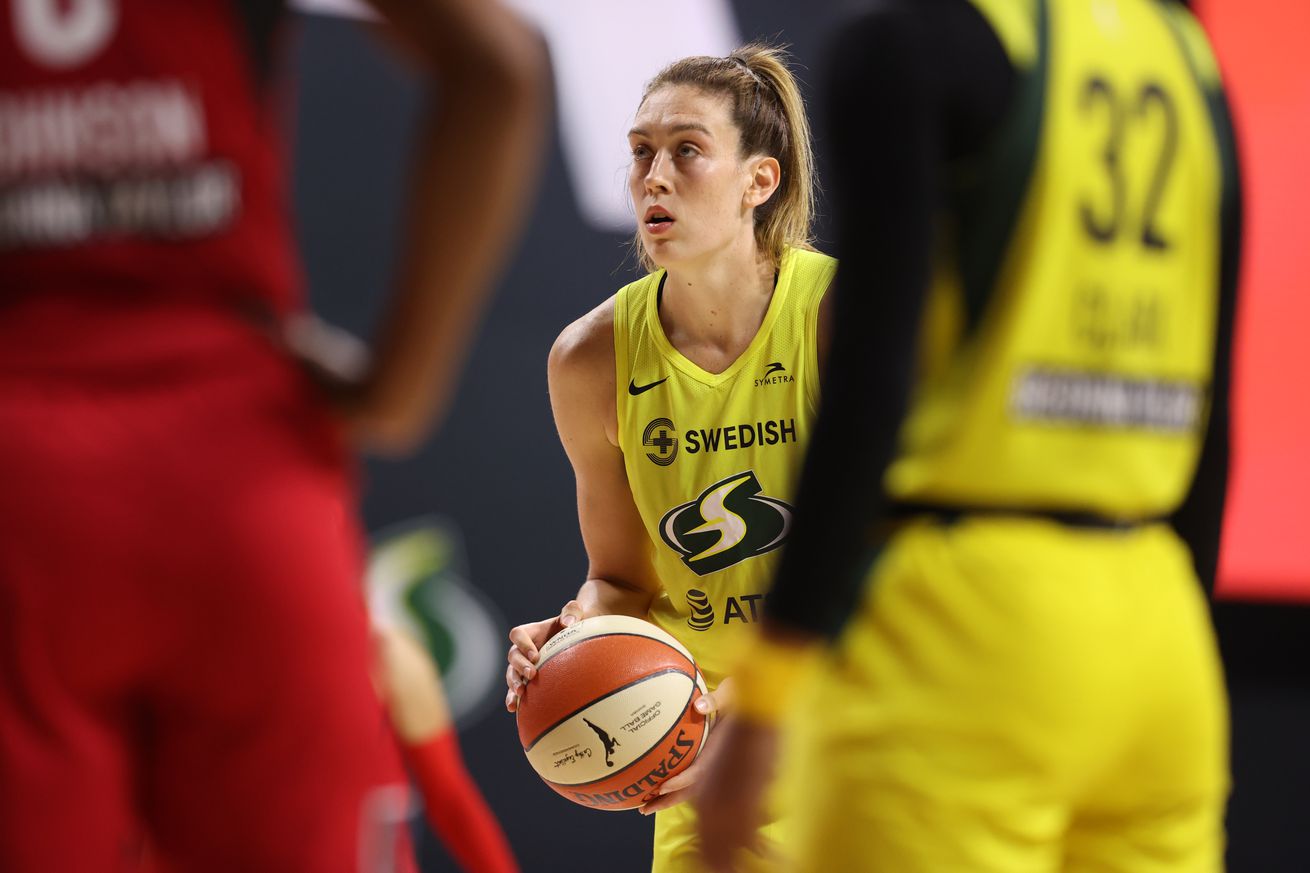 Breanna Stewart (with ball) was 9-of-11 from the free-throw line in her Seattle Storm’s win over the Atlanta Dream on Thursday, Aug. 6, 2020 at IMG Academy in Bradenton, Florida. | Photo by Ned Dishman/NBAE via Getty Images

The Seattle Storm’s 25-of-27 performance from the free-throw line was enough to outdo the Atlanta Dream’s perfect 20-of-20 effort. Breanna Stewart, Jewell Loyd and Jordin Canada starred for the Storm, while Chennedy Carter made history in defeat.

The Seattle Storm (5-1) received a season-high 27 points from Breanna Stewart and held on to defeat the Atlanta Dream 93-92 thanks to phenomenal free throw shooting down the stretch on Thursday night at IMG Academy in Bradenton, Florida.

The Storm were 10-of-10 from the charity stripe in the final minute of the contest. Had they missed even one of those shots, a Chennedy Carter 3-pointer at the buzzer would have forced overtime.

Carter finished with 35 points, making her the youngest player in WNBA history to score more than 30 points in a game. She scored 12 points in each of the final two quarters, nearly leading the Dream (2-4) to a comeback win after they were down 15 at the half.

The game seemed like it was winding down when Canada made two free throws that put Seattle up by six with 26.9 seconds to go. But Atlanta’s Betnijah Laney drilled a 3-pointer with 13.5 seconds left to make it a one-possession game.

Seattle made two more free throws (from Loyd) but Laney again knocked down a 3-pointer to cut the lead to two with 3.8 seconds remaining.

With 3.1 ticks left, Canada knocked down what proved to be the game-winning free throws because they gave Seattle a four-point cushion. After that, Carter quickly dribbled up the court but failed to draw any contact on her 3-pointer. The shot fell, but Seattle walked away with the victory. Since the Minnesota Lynx (4-1) were idle and the Chicago Sky (4-2) lost later Thursday night, the Storm are now alone in first place.

Carter will face another young and prolific scorer in Arike Ogunbowale when the Dream take on the Dallas Wings on Saturday. Atlanta defeated Dallas in its season opener. The Storm will also play on Saturday as they face the Phoenix Mercury for the first time this season.

Sun finally cash in on great first half, defeat Wings 91-68 for first win

Brittney Griner (eight rebounds) and Diana Taurasi (six assists) both had 22 points as Phoenix (4-2) secured its fourth-straight win. The Sky (4-2) were led by Courtney Vandersloot’s 21 points and eight assists, but couldn’t catch up to the Mercury late in the game. Chicago head coach James Wade was ejected after his second technical foul with 1:25 to go.