Recap: Stewie’s control over key moments does the trick 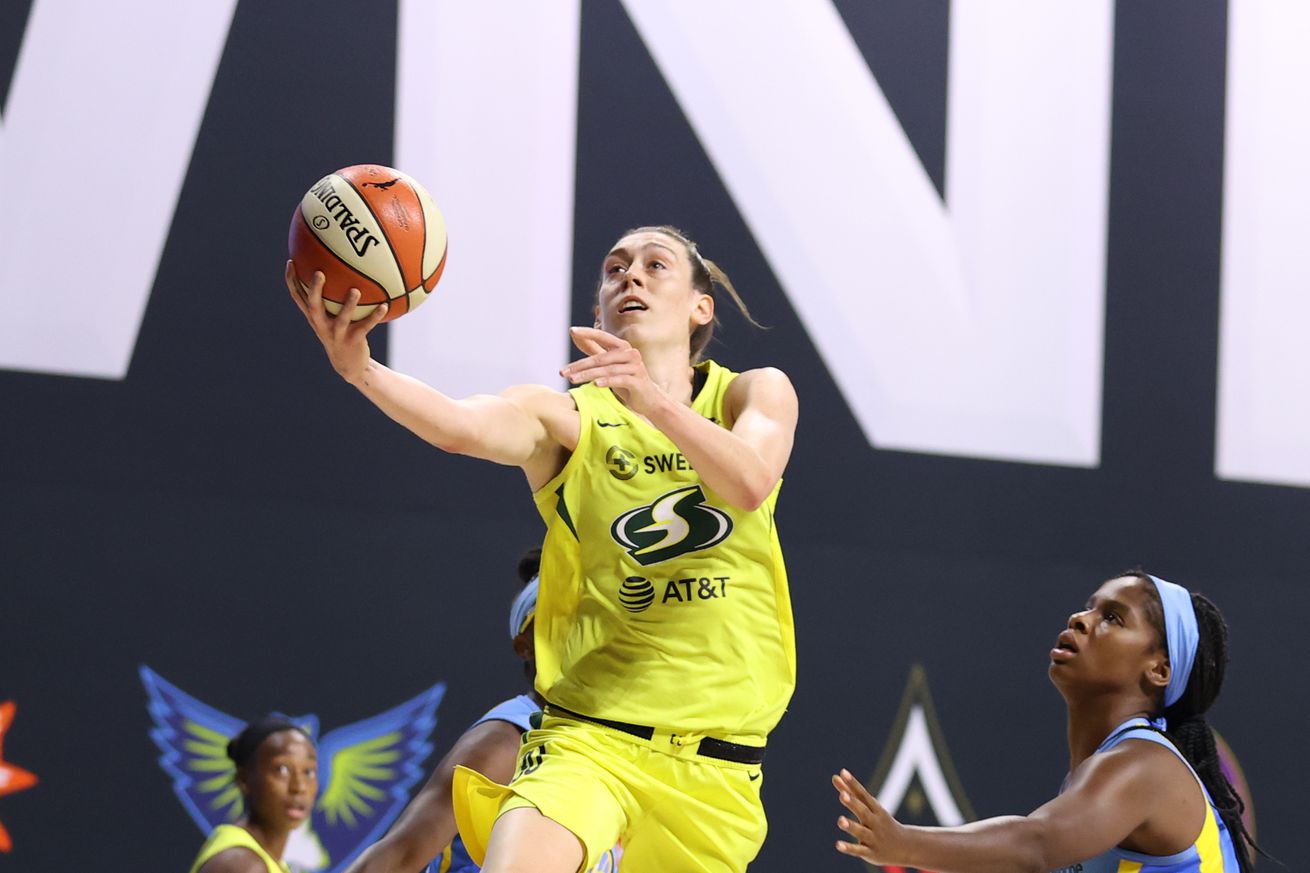 Breanna Stewart (with ball) skies past Ruthy Hebard during Seattle’s win over Chicago on Monday, Aug. 10, 2020 at IMG Academy in Bradenton, Florida. | Photo by Stephen Gosling/NBAE via Getty Images

The Seattle Storm jumped out to a fast start against the Chicago Sky and held on to win without any major threats to their lead. Breanna Stewart, who scored 10 points in the first quarter, kept the Storm in first place with help from Sami Whitcomb, Alysha Clark and Ezi Magbegor.

Breanna Stewart turned in her most complete performance of the season on Monday night with 25 points, seven assists, five rebounds and four steals as her Seattle Storm defeated the Chicago Sky 89-71 at IMG Academy in Bradenton, Florida.

With the win, the Storm (7-1) remain alone in first place.

If the Sky (5-3) had won, the two teams would be tied at 6-2 right now and the Sky would have the head-to-head tiebreaker for the top spot.

Stewart’s performance was complemented by Sami Whitcomb’s 17 points off the bench. Whitcomb went 3-of-3 from downtown, dished out six assists and had four steals. Seattle’s 17 steals as a team compared to Chicago’s eight was a key factor in the contest.

Seattle’s Alysha Clark was 2-of-2 from distance and scored 12 points for the game, while 20-year-old rookie Ezi Magbegor contributed 13 points on 6-of-8 shooting from the field.

Chicago’s Courtney Vandersloot had a quiet night in the scoring column: just four points. But with nine assists and veteran leadership, she did her best to get her team fired up throughout the game. One such instance came with 5:50 left in the third quarter after a Ruthy Hebard layup and foul drawn. Hebard’s ensuing free throw cut Seattle’s lead to 52-40 and it appeared Chicago had a chance to get back into the game.

The Sky went on to cut the lead to eight three times in the remainder of the third, but a Breanna Stewart 3-point make over the outstretched arms of both Azurá Stevens and Hebard broke the Sky’s back with two minutes left in the frame. The Storm led by at least 11 the rest of the way.

Allie Quigley led Chicago scorers with 13 points in defeat, while Cheyenne Parker, Kahleah Copper, Hebard and Stevens were all in double figures as well.

The Sky will take on the Phoenix Mercury in a battle of 5-3 teams on Wednesday — Chicago lost to Phoenix by 10 points on Aug. 6. The Storm take on the Atlanta Dream later Wednesday night — Seattle just barely sneaked past Atlanta on the same date.

The Sun (2-6) received 21 points from Thomas, who also had seven boards, in Connecticut’s second win of the season. Atlanta rookie Chennedy Carter played just three minutes before exiting the contest due to an ankle injury. The Dream fell to 2-6.

Without the services of one of their best players, Diana Taurasi, who is nursing the back injury she sustained on Saturday, the Mercury (5-3) were guided by Skylar Diggins-Smith’s 26 points and seven assists and Brittney Griner’s 22 points and 13 rebounds. Arike Ogunbowale, Allisha Gray and Satou Sabally all had solid performances in defeat as Dallas fell to 3-5.