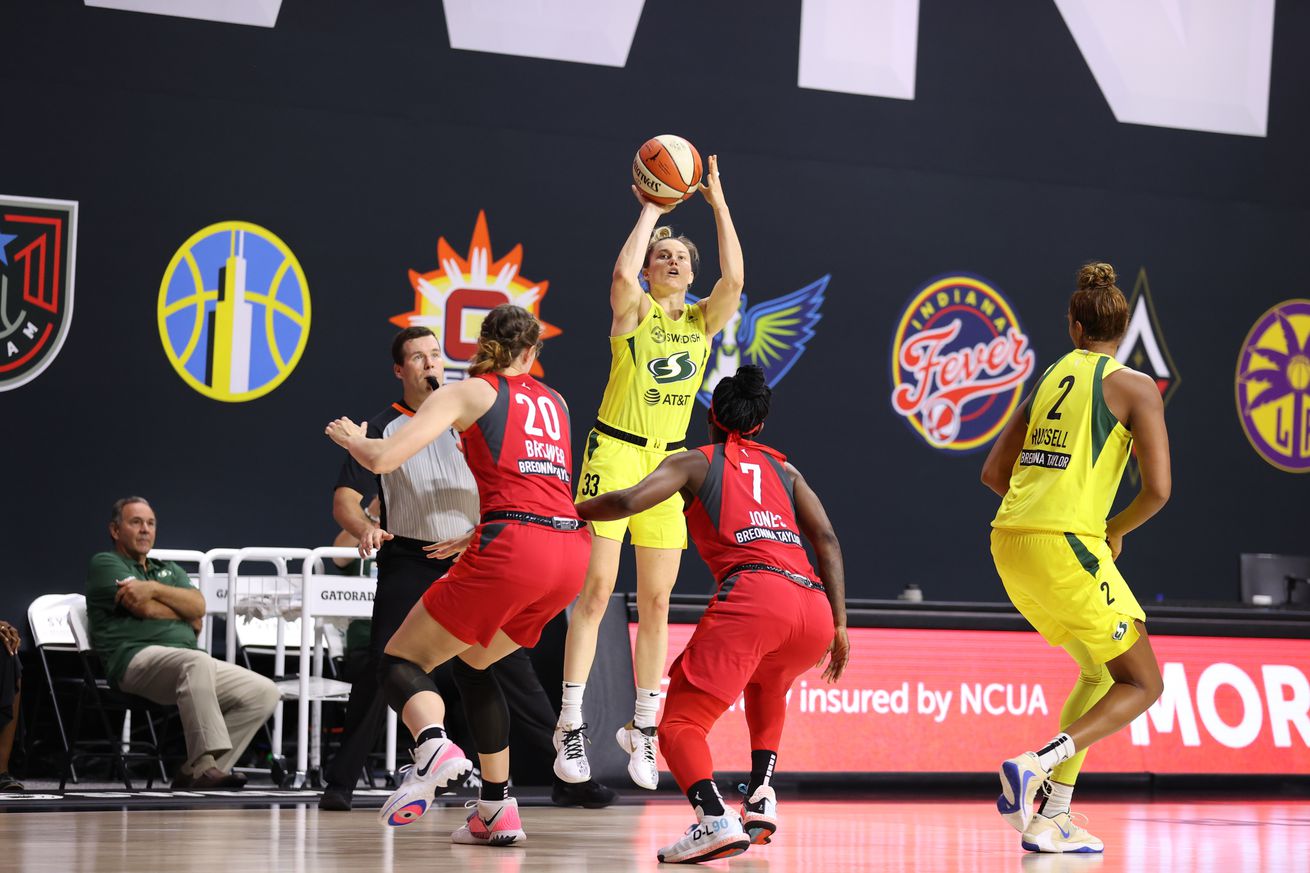 The Storm’s Sami Whitcomb attempts a 3-pointer against the Dream on Wednesday, Aug. 12, 2020 at IMG Academy in Bradenton, Florida. | Photo by Stephen Gosling/NBAE via Getty Images

Sami Whitcomb and the Seattle Storm made it rain in their win over the Atlanta Dream, while DeWanna Bonner came up clutch for the Connecticut Sun and the Chicago Sky got revenge for an earlier loss to the Phoenix Mercury.

In an eventful Wednesday evening of basketball at IMG Academy in Bradenton, Florida, the Seattle Storm (8-1) tied a WNBA record with 18 threes in an 100-63 win over the Atlanta Dream (2-7), while the Connecticut Sun (3-6) claimed a 70-66 victory over the Dallas Wings (3-6) behind the late-game heroics of DeWanna Bonner. Additionally, the Chicago Sky (6-3) made a statement by cruising to an 89-71 win over the Phoenix Mercury (5-4) in a battle of 5-3 teams.

The Storm’s record-setting night, which matched that of the Washington Mystics on Aug. 18, 2019, was led by Sami Whitcomb (6-of-9 from downtown) and Jewell Loyd (4-of-5), who had 20 points apiece. Alysha Clark was third on the team with 16 points, while Sue Bird returned from injury to score nine points on 3-of-5 shooting from distance. Jordin Canada dished out a game-high 10 assists for Seattle and Breanna Stewart, who had a quiet seven points, hauled in a game-high nine rebounds.

Whitcomb made five three pointers in the fourth quarter to help the Storm tie the record. In a two minute span late in the frame, she made three triples. Seattle was 18-of-30 (60 percent) from beyond the arc, which was a better performance than its overall field goal effort (56.5 percent).

Down by three after the third, the Sun (3-6) received a game-sealing layup from DeWanna Bonner with 10.8 seconds remaining and won the fourth quarter 24-17.

Sun forward Alyssa Thomas quickly drove to the basket with impressive authority and made a layup with 38.5 seconds to go to give the Sun a 68-64 lead. Arike Ogunbowale then made a step-back deep two on Dallas’ ensuing possession to cut the lead back to two. But, when Connecticut got the ball back, Bonner faked out the Dallas defense and created a wide-open lane on the left side, which led to an easy finish. Dallas rookie Satou Sabally then missed a 3-pointer with 1.5 seconds left, allowing Connecticut to hold on for the victory.

The Sun kept at it, and it paid off. #SUNState pic.twitter.com/nhtOzXBn8H

Despite Allie Quigley’s 0-of-3 night from distance and a 1-of-11 effort by Chicago as a whole, the team was able to win every quarter by at least three points. Quigley led the way with 20 points on eight field goals and a 4-of-4 performance at the charity stripe. Kahleah Copper, Courtney Vandersloot and Azurá Stevens scored 16, 12 and 10 points, respectively. Meanwhile, Cheyenne Parker and Stefanie Dolson each had nine boards.

GREAT to have Big Mama back. @bigmamastef is your @MagellanCorp Player of the Game! pic.twitter.com/9MuqcfNbC9

Skylar Diggins-Smith (four assists) and Sophie Cunningham each had 15 points in defeat. Phoenix was 7-of-19 from deep with Diggins-Smith (2-of-5) and Cunningham (3-of-5) doing the most damage, but the team was out-rebounded 38-26.

All six teams will be playing again on Friday, with the Wings taking on the Storm for the first time this season, the Mercury facing the Dream and the Sky meeting the Sun. The Mercury defeated the Dream on Aug. 4, while the Sky beat the Sun on Aug. 8.