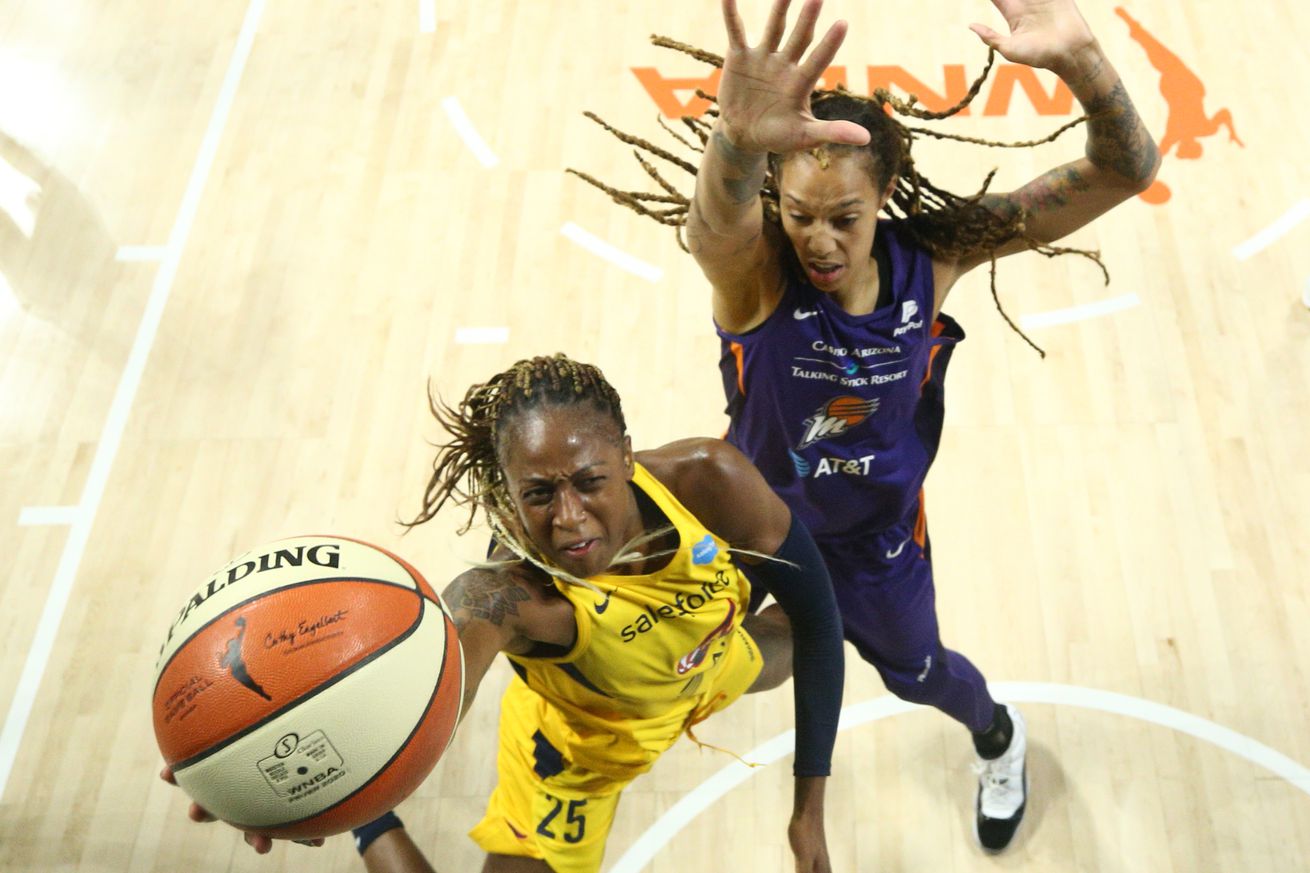 Tiffany Mitchell (left) came up big in the Indiana Fever’s toppling of the Phoenix Mercury on Wednesday, July 29, 2020 at IMG Academy in Bradenton, Florida. | Photo by Stephen Gosling/NBAE via Getty Images

The Indiana Fever, behind Tiffany Mitchell’s team-high 24 points, clinch big win over the Phoenix Mercury in a wild one. Also on Wednesday, the Dallas Wings win easily over the New York Liberty in spite of Sabrina Ionescu’s big game and the Las Vegas Aces get to 2-0 with commanding win over the Atlanta Dream.

The Indiana Fever’s 106-100 victory over the Phoenix Mercury could be a turning point for new head coach Marianne Stanley and the Fever.

In the win, Tiffany Mitchell scored 22 of her team-high 24 points in the second half, Candice Dupree scored 23 points and contributed nine rebounds, and Teaira McCowan came off the bench to record a double-double with 20 points and 13 rebounds.

The Fever offense seems to be officially unlocked.

There were some bright moments for the Mercury, such as Bria Hartley coming off the bench to score a game-high 26 points in 25 minutes and dish five assists, plus second-year player Alanna Smith producing her best game as a WNBA professional with 14 points and seven rebounds.

As for the team’s old guard, Brittney Griner scored 23 points and recorded seven rebounds, but Diana Taurasi managed just six points on 1-of-5 shooting from the field.

The Mercury missed three free throws in the last fifteen seconds of regulation that could have set up different scenarios and presented a different outcome. Yet, those opportunities weren’t seized, the Mercury have an 0-2 start to the season, and they now must right the ship urgently.

Both teams shot around 50 percent and made nine 3-pointers apiece, indicative of the close, shoot-out nature of the game. With one or two additional defensive stops, Phoenix could have landed in the win column.

The Fever and Mercury rest on Thursday and return to action on Friday, when the Fever will face the young and exciting Dallas Wings, with each seeking a second win of the season. The Mercury, meanwhile, hope to avoid an 0-3 hole but a win will not be easy against the Las Vegas Aces, who have looked dominant in their first two games.

In her second professional game, Sabrina Ionescu went off, scoring 33 points, while contributing seven assists and seven rebounds. After shooting 0-of-7 on 3-pointers in her professional debut on Saturday, she was 6-of-10 from beyond the arc against the Wings. Layshia Clarendon scored 11 points and was the only other member of the Liberty to score in double figures.

A’ja Wilson and Dearica Hamby led the Las Vegas Aces to an easy 100-70 win over the Atlanta Dream.

From start to end, the Las Vegas Aces were locked in on both ends of the floor in their win against the Atlanta Dream. The Aces shot 53.5 percent and held the Dream to 40-percent shooting. A’ja Wilson was the game-high scorer with 21 points; her 11 rebounds put her at her second straight double-double in as many games.

After shooting 0-of-5 from deep in their season opener, the Aces were highly accurate against the Dream. Although they only attempted nine 3-point shots, they made six of them. The Dream, meanwhile, shot a dismal 5-of-28 from deep.

Elizabeth Williams led the Dream with 16 points and Chennedy Carter scored 11 points, but on 3-of-11 shooting. Monique Billings scored just five points on Wednesday after putting up 30 points in the Dream’s season opener. Head coach Nicki Collen will be looking for more consistency from Billings.