Recap: Vandersloot to Stevens for Sky win over Aces 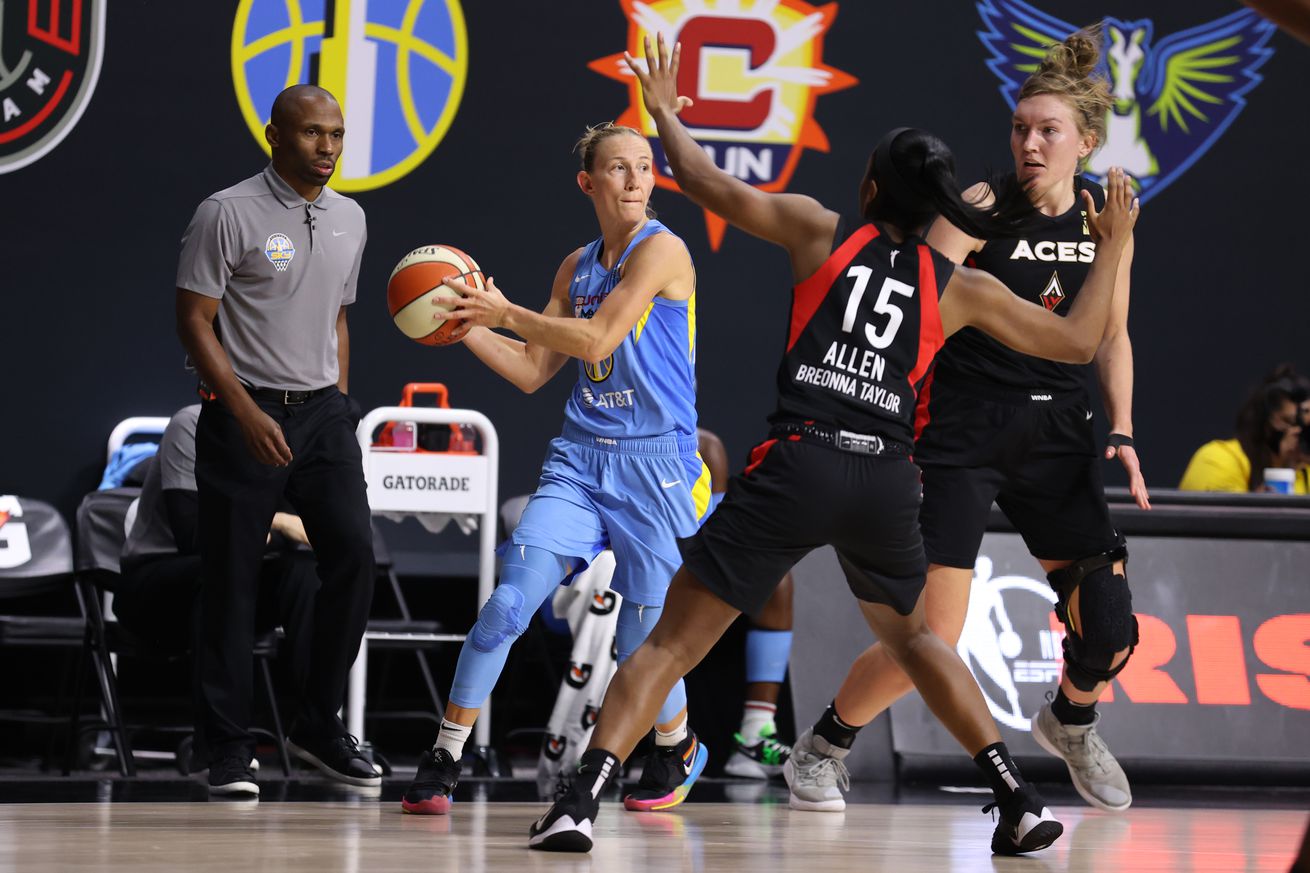 Courtney Vandersloot (with ball) looks to make a pass during her team’s win over the Las Vegas Aces on Tuesday, Aug. 18 at IMG Academy in Bradenton, Florida. | Photo by Stephen Gosling/NBAE via Getty Images

Courtney Vandersloot became the first WNBA player ever with at least 15 points, 15 assists and five rebounds in a single game with a game-winning dish to Azurá Stevens that allowed the 8-4 Chicago Sky to eke past the 8-3 Las Vegas Aces. Meanwhile, the 5-7 Connecticut Sun remained on the right track with their win over the 4-7 Indiana Fever and the 11-1 Seattle Storm blew out the 1-10 New York Liberty en route to the best start in franchise history.

The Sky/Aces rivalry has featured some difficult clutch shots in the past. On Tuesday night at IMG Academy in Bradenton, Florida, however, the game-winning play could not have finished with an easier look, after a Courtney Vandersloot pass that served as her 15th assist of the night, tying a career high.

Chicago ran a play out of a timeout that ended with the Vandersloot dish past the outstretched arm of Dearica Hamby to a cutting Azurá Stevens, who converted on a wide-open layup with 2.9 seconds remaining.

The Aces still had hope after that, but the Sky held on for the 84-82 win after Danielle Robinson missed an open 3-pointer off the rim at the buzzer.

A’ja Wilson went 3-of-12 from the field for Las Vegas, finishing with her lowest point total of the season (11), though she did manages eight boards, five blocks and four assists. Meanwhile, Angel McCoughtry continued her stellar play with 17 points, four assists and three steals in defeat.

The outcome of the game could have been different if the Sky had felt more pressure on their final possession. Kayla McBride, who finished with 15 points for the Aces, just barely missed a contested layup on a fast break with 13.6 seconds left. She was fouled and made her two free throws to tie the game at 82-82, but had the layup gone down it would have been 83-82 in favor of Las Vegas.

The Aces won the first quarter 25-15, but entered the fourth down six.

The Sky will seek their first three-game winning streak of the season when they face the New York Liberty at 7 p.m. ET on Thursday. Meanwhile, the Aces, who managed to stay in second place despite the loss, hope to bounce back against the Connecticut Sun at 10 p.m. ET that night.

DeWanna Bonner scored 28 points and hauled in eight rebounds, while Brionna Jones was good for 15 and nine as the Sun improved to 5-2 in their last seven games. They moved ahead of the Fever and Dallas Wings to claim seventh place with the win. | Box Score

Every player that entered the game for Seattle scored, with six reaching double figures and nine notching at least six points. Epiphanny Prince led the way with 16 points, while Natasha Howard recorded the game’s lone double-double with 12 points and 11 boards. | Box Score

Half the team in double figures.