Recap: Youth and experience get South Carolina their first-ever win vs. UConn 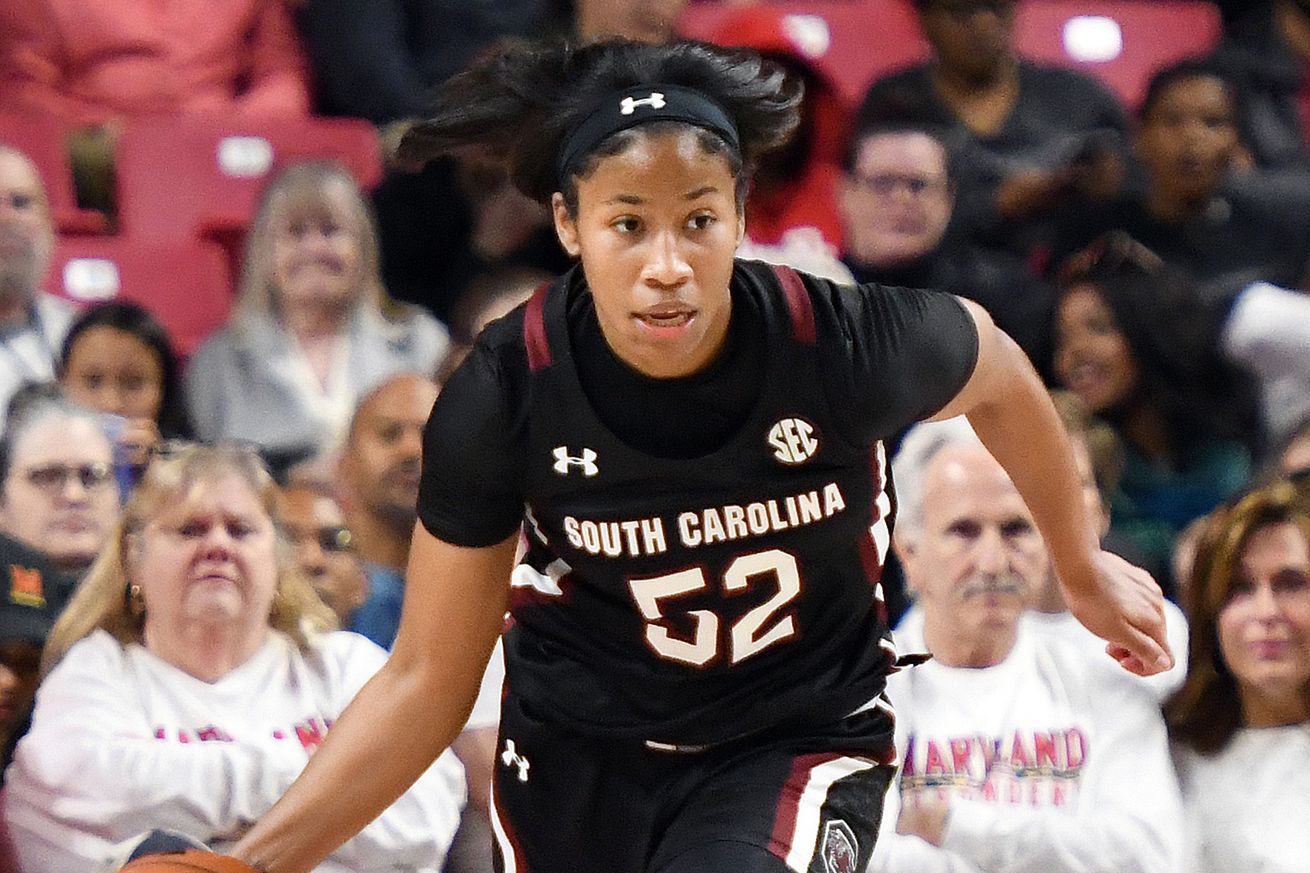 Senior guard Tyasha Harris is South Carolina’s leader, but she doesn’t always lead the team in points. On Monday she did by notching her fourth-highest scoring output of the season in the team’s first win over UConn. | Photo by Mitchell Layton/Getty Images

Tyasha Harris notched her name higher in WNBA Draft conversations with a 19-point, 11-assist, zero-turnover performance that led the No. 1 South Carolina Gamecocks to their first-ever win over the No. 5 UConn Huskies.

Led by senior Tyasha Harris’ 19 points and 11 assists, the No. 1 South Carolina Gamecocks (23-1, 10-0 SEC) defeated the No. 5 UConn Huskies 70-52 on Monday before a sold-out crowd of 18,000 at Colonial Life Arena in Columbia, S.C. Despite being a top team in recent years, South Carolina was held winless against UConn until Harris, who also had four rebounds and zero turnovers, powered the Gamecocks to their first-ever victory over the storied Huskies in the teams’ ninth meeting.

South Carolina got off to a fast start. Freshman center Aliyah Boston found the bottom of the net on the first 3-point attempt of her collegiate career to make it 5-2 in favor of the Gamecocks, who never trailed. Boston missed on four other long-range attempts but that first one set the tone.

With 1:55 to go in the first, freshman guard Zia Cooke pressured UConn guard Crystal Dangerfield into a turnover in the backcourt and Cooke missed a quick floater that would have given the Gamecocks an 11-2 lead and electrified the already pumped up home crowd. Small lapses in momentum like that were the worst things that South Carolina dealt with in an otherwise dominant effort.

The Gamecocks had padded an 35-23 cushion by halftime. In the third quarter, South Carolina led by as many as 21, entered the fourth with a 13-point advantage and cruised to the 18-point victory.

Dangerfield led all scorers with 25 points (9.5 above her season average) and was hot from distance (50 percent on 4-of-8 shooting). Harris, on the other hand, topped her scoring average of 11.8 points by 7.2. It was a battle between two great distributors who both lit up the scoring column in this game.

Harris distributed the ball, too — she recorded 11 assists for a double-double, her first of the season and 10th of her career. South Carolina head coach Dawn Staley praised Harris’ leadership and command of the game.

“Ty was a difference-maker,” Staley said, per The Athletic’s Tamryn Spruill. “She did a great job of just managing the game. She knew when to shoot it, she knew when to pull it back, she knew who should shoot it. And that’s just, you know, a seasoned point guard.”

The matchup between Boston, who grabbed 10 rebounds in the first half alone, and UConn center Olivia Nelson-Ododa also was intense early on. Boston finished with 12 boards and 13 points, but was forced to take midrange and outside shots at times because Nelson-Ododa was applying pressure. Nelson-Ododa and junior Megan Walker each scored 10 points for the Huskies.

South Carolina out-shot UConn comfortably from the field (43.9 percent to 36.1) and from 3-point range (eight made 3-pointers to UConn’s four). The Huskies did out-rebound the Gamecocks by two (40-38), though, and won the points in the paint battle (24-18).

UConn has now lost to the top three teams in the AP rankings: No. South Carolina, No. 2 Baylor Lady Bears and No. 3 Oregon Ducks. The Huskies are now fifth in the latest AP Poll (Feb. 10) behind the No. 4 NC State Wolfpack. Meanwhile, the Gamecocks remain at No. 1 for the fifth-straight week.

UConn is off until Sunday, Feb. 16, when they play at the South Florida Bulls at 2 p.m. (SNY or ESPN3/97-9 ESPN or USF BULLS UNLIMITED or Huskies All-Access).