Review: ‘Women of Troy’ is appreciated but incomplete 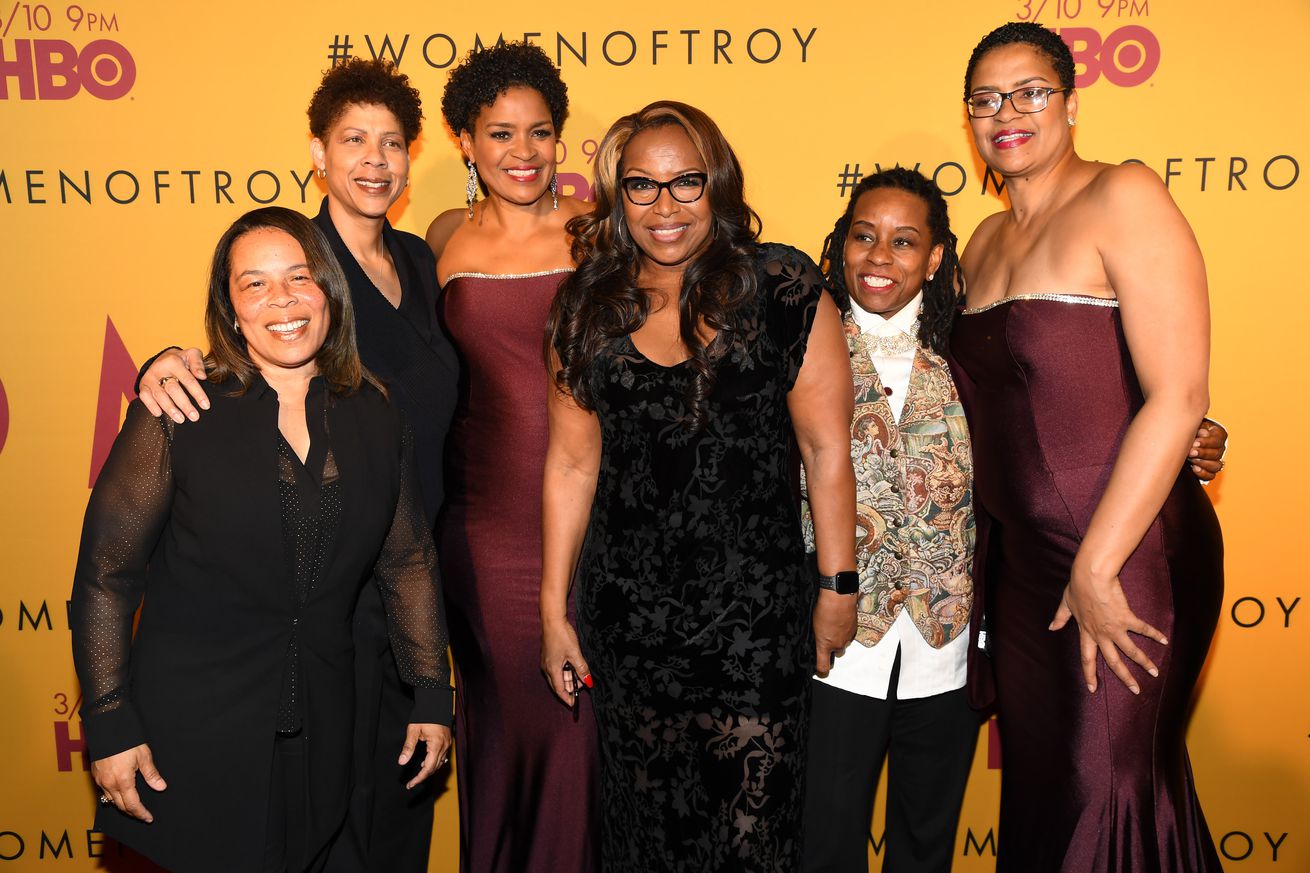 The Women of Troy — Rhonda Windham, Cheryl Miller, Pam McGee, Cynthia Cooper, Juliette Robinson and Paula McGee — at the premiere of Women of Troy. | Photo by Jeff Kravitz/FilmMagic for HBO

HBO’s Women of Troy is an overdue celebration of Cheryl Miller and her USC Trojans teams of the mid-1980s. However, the documentary misses the opportunity to explore how the racialized history of women’s basketball shapes the influence and importance of Miller and her teammates.

On Tuesday night, HBO will debut its most recent documentary, Women of Troy, produced in partnership with Ringer Films.

Women of Troy celebrates the mid-1980s USC Trojans women’s basketball teams led by Cheryl Miller, providing long-overdue appreciation for the influence of the mini-dynasty that captured national championships in 1983 and 1984. While highlighting the “other” Women of Troy — twins Pam and Paula McGee, Cynthia Cooper, Rhonda Windham and Juliette Robinson — Women of Troy focuses on the electric and ineffable Miller and divides the women’s college game into eras: BC, “Before Cheryl,” and AC, “After Cheryl.”

The structuring is apropos for such a revolutionary, physically-imposing, playmaking point forward who preceded the likes of Candace Parker, Alyssa Thomas, LeBron James and Giannis Antetokounmpo.

Women of Troy overly invests in the singular mythology of Miller, however, and misses an opportunity to highlight the ways she and her teammates were ranked against the women who before them and after. As the nation’s first prominent college women’s basketball team, to be proudly “black,” Miller and the Women of Troy belong to an overlooked genealogy of women’s basketball.

The dawning of the Cheryl Miller era

BC, or “Before Cheryl,” is presented as a rule-bound world of women’s basketball epitomized by a dated instructional video featuring dainty young white women doing rudimentary shooting drills.

The possibility of change was burbling, however, as UCLA’s Ann Meyers and Old Dominion’s Nancy Lieberman played with poise and panache. And for all their performative traditionalism, the Immaculata Mighty Macs and Louisiana Tech Lady Techsters were pushing the boundaries of women’s basketball, too. As Sonja Hogg, the matriarch of Lady Techsters basketball, insists, it “took time and persistence” for women to prove they could play the five-on-five game at high level. Yet, Hogg still demanded that her Lady Techsters show their skills while sporting sleeved jerseys, an effort to maintain appropriate, feminine respectability.

Highlights of Miller in high school, showcasing her characteristic confidence and charisma, substantiate Burke’s estimations, as do the reflections of her teammates. Footage shows a young Pam McGee telling a reporter, “We spell women’s basketball ‘M-I-L-L-E-R.’” Rhonda Windham suggests that Miller introduced a “new frontier” for women’s hoops.

When she arrived at USC, Miller injected the already-talented Women of Troy with her attitude and athleticism and ushered in a new uptempo era of women’s college basketball. Back-to-back national titles in 1983 and 1984 testify to the stylistic significance of the Women of Troy.

Race and the Women of Troy

Describing the brand of basketball introduced by USC in the early-to-mid 1980s, Paula McGee asserts, “We didn’t play that kind of southern, southern basketball where you just keep pounding it in the paint. We would run.” Juliette Robinson likewise notes, “We walk into a gym; those girls didn’t look like us at all. Now those of us who were from, let’s just say, ‘the streets,’ we’d just look at each other.”

The Women of Troy, who would become the first all-black starting five at the 1983 NCAA National Championship Game, did not play “traditional” or “white girl” basketball — they played “black” basketball.

The rivalry between USC and Louisiana Tech quickly became potent because of this cultural difference. While black women did play for the Lady Techsters, the traditions of white women’s basketball ruled in Ruston, Louisiana. In contrast, USC head coach Linda Sharp allowed the Women of Troy to be themselves. She did not make them abide by racialized — and exclusionary — expectations of modesty, humility and femininity.

By capturing the 1983 national title, the Trojans not only triumphed over Louisiana Tech, they scored a symbolic victory over the sport’s traditionalism. Juliette Robinson rightfully boasts, “The respect of women’s basketball, we took that. We took it from Louisiana. We took it from these girls. We took it. Yes, we did.”

Through the narration of USC’s rise to national prominence, the importance of racial ideologies and identities remain implicit, yet ultimately unaddressed. For instance, Doris Burke emphasizes:

This is what struck me so much about Cheryl Miller is — she was unafraid to be unabashedly in-your-face good. And, she was from Los Angeles. And, you know, was totally comfortable operating in the spotlight. Do you know how unusual that was for a woman in that day and age to embrace all ‘eyes on me’?

In short, Miller was unafraid to be a black woman athlete.

As is characteristic of much of women’s sports history, Women of Troy emphasizes barriers of gender, underscoring the biases of gender and sex that women have overcome to succeed in sports. Not incorrect, the narrative is, however, incomplete. Gender- and sex-based barriers intersect with differences of race, and differences of race are critical to the history of women’s basketball.

Before Cheryl, there was Ora

Behind the walls of segregation, women of color played a game that resembled the basketball played by the Women of Troy.

Before there was Cheryl Miller, there was Ora Washington, a Philadelphian who was the top black women’s athletic star (she competed in basketball and tennis) of the 1920s and 1930s.

According to historian Pamela Grundy, the black press described Washington in terms that echo those later ascribed to Miller — “brilliant,” “peerless” and “inimitable.” Grundy further shares local sportswriters’ thoughts on the star of the Philadelphia Y’s Germantown Hornets.

[Washington] can do everything required player. She passes and shoots with either hand. She is a ball hawk. She has stamina and speed that make male players blush with envy.

The assessments of Washington’s opponents recall the ways opponents described Miller — a mixture of awe and agitation.

Lucille Townsend, the center for Bennett College of Greensboro, North Carolina, told Grundy of a time when she and Washington faced off for a jump ball and Washington uttered, “Don’t out-jump me.” When Townsend did not cower, she encountered Washington’s ferocity. “I never saw her when she hit me,” Grundy recalls, “but she did it so quick it would knock the breath out of me, and I doubled over.”

Before Miller’s so-called “antics” would anger the likes of Pat Summitt, Washington was unafraid to use intimidation to her advantage.

In 1932, Washington joined the Philadelphia Tribune Girls, the team captained by Philadelphia’s other black woman basketball star — Inez Patterson. Patterson was the Pam McGee to Washington’s Miller, forming a powerful and popular duo. As Grundy documents, the black press considered the Tribune Girls’ contests an entertainment splurge worth saving for, even during the depths of the Great Depression:

Start saving 25c now so you can attend on Thanksgiving Nite the TRIBUNE Girls big opening BASKETBALL Game and Dance. Don’t miss seeing ORA WASHINGTON and INEZ PATTERSON in action. They are two of the greatest girl players in the world. They make you forget the Depression.

Remembering contests against the Washington-Patterson-propelled Tribune Girls, Ruth Glover, another Bennett College star, shared with Grundy, “They just had it all together. They could dribble, and keep the ball and make fast moves into the basket which you couldn’t stop.”

Over 50 years before the Women of Troy established themselves as a Hollywood, high-flying force to be reckoned with, the Tribune Girls took it to all comers, selling out segregated arenas across the South and Midwest as they defeated black club and college teams.

Unfortunately, Women of Troy offers only a truncated, chronological history, beginning with the narrative of the white women’s basketball that immediately preceded Miller and the Women of Troy. While it is unreasonable to expect an hour-long documentary to offer a comprehensive history, recognition of the longer history of black women’s basketball — a history that extends beyond Washington, Patterson and Philadelphia — would have enhanced the documentary and encouraged a deeper appreciation of what Miller and the Women of Troy represent.

The strengths of Women of Troy

Despite this historical criticism, Women of Troy is a delight, featuring many strengths. These three, in particular, deserve attention.

Being black at USC

While Women of Troy fails to interrogate the history of race within women’s basketball, it successfully documents the daily, race-based challenges that the Women of Troy encountered as female athletes of color at a primarily-white university. Images of the preppy, yuppified and almost all-white USC campus of the mid-1980s are spliced with the honest reflections of the McGees and Robinson.

“I think there was an issue with being black at USC,” states Juliette Robinson.

“Some of our alumni were saying, ‘Oh, but you’re different.’ No,” asserts Pam McGee before Paula adds, “There was this kind of idea that the African Americans in this community were different from those at USC.”

The legendary voices of the women’s game

The documentary spotlights the voices of women, letting the women’s game’s players, coaches and commentators (with the understandable exception of Geno Auriemma) narrate the significance of USC. In addition to the aforementioned Burke, Meyers, Lieberman, Sharp and Hogg, Kim Mulkey, Rebecca Lobo, Jackie MacMullan and Candace Parker offer commentary.

The only misfortune is that the voice of Pat Summitt is missing.

The wisdom of the Women of Troy

The greatest strength of the documentary is the Women of Troy themselves.

In interview segments, they offer vivid recollections that enliven the documentary. The rapport between Pam and Paula McGee shines. Viewers easily can imagine the twins accosting the recruit Miller — then close to committing to UCLA — telling her, ”You can play two years with us or two years against.” Hints at the tensions that existed between Cooper and Miller are appreciated. Cooper, a native of impoverished but proud Watts, refused to reflexively respect Miller, the celebrated superstar recruit from the suburbs.

Women of Troy succeeds in allowing the Women of Troy the space and stage to tell their story, permitting them to offer their own understanding of their historical importance.