Rookies On Our Radar: How soon before Ty Harris gets her first pro start? 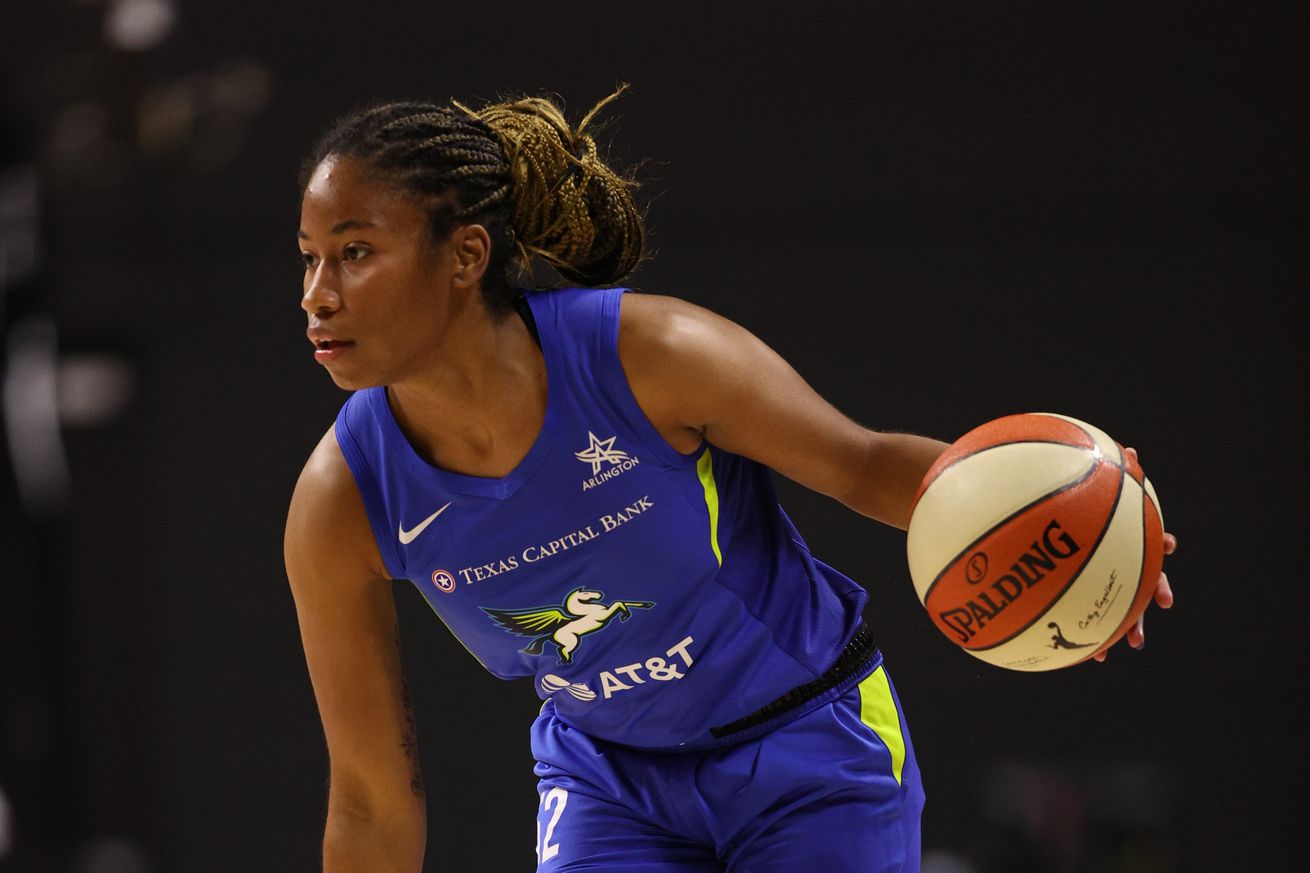 Rookie Tyasha Harris in her WNBA debut with the Dallas Wings on July 26, 2020, at IMG Academy in Bradenton, Florida. | Photo by Ned Dishman/NBAE via Getty Images

Tyasha Harris, a backup point guard for the Dallas Wings, made quite the statement with her tempered, efficient, high-IQ play in her WNBA rookie debut. Chennedy Carter (Atlanta Dream) and Crystal Dangerfield (Minnesota Lynx) also showed out.

Tyasha Harris, a backup point guard for the Dallas Wings, made quite the statement with her tempered, efficient, high-IQ play in her WNBA rookie debut, just the stuff WNBA Rookie of the Year (ROY) voters seem to be into — favoring versatility of skill rather and multifaceted impact over straight-up dominance.

Although Ogunbowale bested Collier in average points scored per game, she did so with less efficiency. Even more, Collier demonstrated greater efficiency in all other advanced statistical categories.

So, if the ROY voters keep with last year’s trend of awarding the rookie who most impacts all aspects of the game, executes efficiently on both ends of the floor and possesses a diverse and versatile skill set, here are the early favorites (yes, based on the players’ first professional game, and most definitely subject to change).

Rookies On Our Radar

The UConn product led all rookies with a plus-minus rating of +17. In her professional debut for the Minnesota Lynx, Dangerfield produced a well-rounded 10 points, two rebounds, one assist and one steal in 21 minutes off the bench. She made 50 percent of her field goals and 33.3 percent of her 3-point attempts in the Lynx’s season-opening win over the Connecticut Sun.

Where she can improve: Extra points. Dangerfield got to the free-throw line once and made one of her two attempts. As a 5-foot-5 guard, it may not be fun to absorb a ton of contact, but she can use her speed to trick defenders into reaching in.

The Texas A&M standout led all rookies in scoring with 18 points in 30 minutes of playing time. Her plus-minus rating of +11 ranked second among rookies, and she also recorded a dynamic eight assists, five rebounds, one block and one steal in her professional debut. With trouble finding the hoop — she made five baskets on 16 attempts and came up 0-of-four from 3-point range — Carter made up for at the free-throw line, making a stellar eight of her nine tries.

Where she can improve: Given that Carter was two assists shy of a double-double, her willingness to share the ball is apparent, and it played an integral role in the Atlanta Dream’s season-opening win over the Dallas Wings. But to get wins over veteran teams with championship pedigree, she will have to make the extra pass to create better scoring opportunities for others.

The South Carolina product of the Dawn Staley coaching tree scored a second-ranked 13 points among rookies in her professional debut of 19:56 minutes for the Wings in which she also dished four assists. Harris completed an ultra-efficient 4-of-7 makes from the field, 3-of-6 shots from 3-point range and a perfect 100 percent of her free throw attempts. Harris’ plus-minus rating of +3 ranked fourth among all rookies, behind Dangerfield, Carter and Te’a Cooper.

Where she can improve: Harris turned the ball over twice, so that’s an area where she can get better. Yet, she thoroughly outperformed starting point guard Moriah Jefferson who, in her first game back after missing the 2019 season due to injury, managed seven points on 28.6 percent shooting from the field. If Harris continues her steady, efficient performances, she may find herself in a starting role sooner than later (of course, contingent on how Jefferson acclimates to the revised roster following a long absence).

Notes on other rookies

WNBA opening weekend was all about No. 1 overall draft pick Sabrina Ionescu, who made history in college and dazzled fans in the process. Her highly-anticipated WNBA debut for the New York Liberty, however, ended in a 16-point loss to the more experienced, 2018 champion Seattle Storm. Ionescu played with a lot of poise, but shot 4-of-17 from the field and 0-of-8 from the 3-point line (Welcome to the league! Love, the Storm defense). Ionescu also finished with a plus-minus of -15, just ahead of Leonna Odom’s last-ranked -18. Yet, Ionescu’s 12 points, six rebounds and four assists, plus 4-of-4 makes from the free-throw line, reflect her overall skill set. Once she adjusts to WNBA defenses and those shots start falling, the Liberty will be a headache for the rest of the league.

Satou Sabally, selected No. 2 overall, turned in a respectable debut performance for the Wings with 11 points (45.5 percent field-goal shooting and 33.3 percent 3-point shooting), five rebounds, five assists and two steals. She played 27 minutes and finished with a plus-minus of -12. Sabally also racked up six fouls — an aspect of her game she’ll need to improve on moving forward.

Te’a Cooper made the most of her 16 minutes of playing time in her professional debut, finishing a rookie third-best +5 in plus-minus. She came off the bench and contributed 10 points, two assists and two steals to the Los Angeles Sparks’ commanding victory over the Phoenix Mercury. Cooper made 4-of-7 shot attempts, including 1-of-3 tries from 3-point range. Her 57.1 percent field-goal shooting ranked third among rookies (tied with Harris).