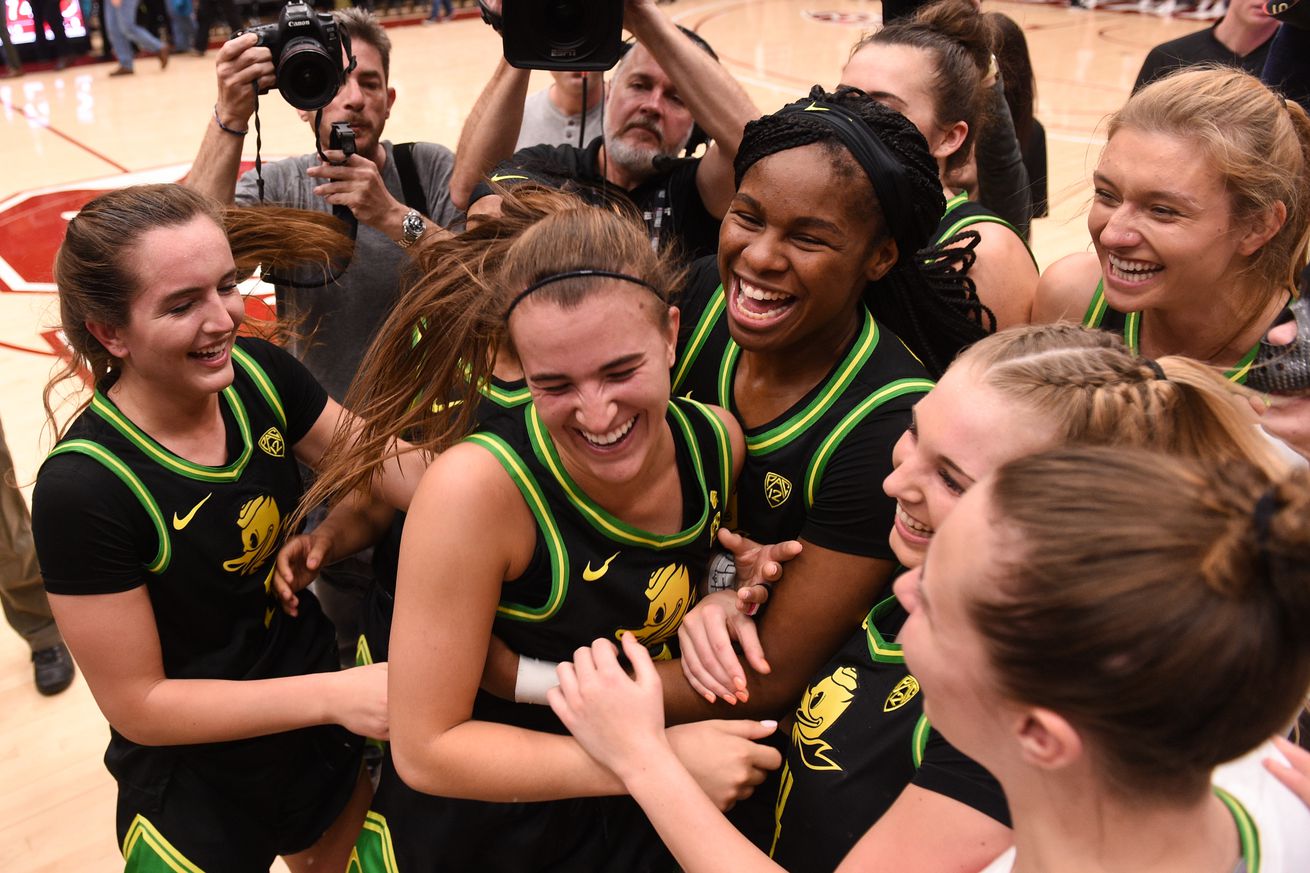 In a Big Monday night game against the No. 4 Stanford Cardinal on Feb. 24, 2020, Sabrina Ionescu became the first player in college basketball history (man or woman) to notch 2,000 points, 1,000 assists and 1,000 rebounds. The timing of her history-making performance during the No. 3 Oregon Ducks win could not be more significant.

Sabrina Ionescu spent the morning of Monday, Feb. 24, at Staples Center in Los Angeles, speaking at the memorial service of her fallen friends: NBA legend Kobe Bryant, who retired from playing in 2016 wearing jersey #24, and Gianna Bryant, his daughter, who wore #2 for the Mambas. That evening, the No. 3 Oregon Ducks star, who considered Bryant a mentor, mustered enough Mamba Mentality to make history.

She came into the Pac-12 matchup against the No. 4 Sanford Cardinal on the road needing nine rebounds to reach 1,000 for her career. She recorded 12, and became the first college basketball player (man or woman) to reach the 2K-1K-1K club: 2,000 points, 1,000 assists and 1,000 boards. On the Ducks’ way to the 74-66 victory on the Cardinal’s home floor, Ionescu also scored 21 points and dished 12 assists for the 26th triple-double of her career.

It was for (Kobe). To do it on 2/24/20 is huge. We had talked about it in the preseason. I can’t really put that into words. He’s looking down and really proud of me and just really happy for this moment with my team.

And even her 26th career triple-double isn’t without deep meaning.

And Ionescu did this without any food in her system.

“(The team) was done with pregame meal when (Ionescu) got back to the hotel,” Oregon head coach Kelly Graves explained. “She hadn’t eaten yet, tried to and couldn’t keep anything down. But, you know, in true Sabrina fashion, she goes out on the biggest day and biggest moment and shines bright.”

Ionescu chose not to declare for the WNBA Draft in 2019, as a junior, because of her and the Ducks’ unfinished business — bringing a championship to Eugene. They have two regular-season games left before their quest to get back to the Final Four, and beyond, begins in earnest.

To get to the NCAAW mountaintop, however, Oregon will have to go through the defending champion No. 2 Baylor Lady Bears and the No. 1 South Carolina Gamecocks. With all three teams seeming to peak at the right time, there will be no easy victories.