Seattle Storm’s No. 1 offseason goal: Dynasty now vs. down payment on the future? 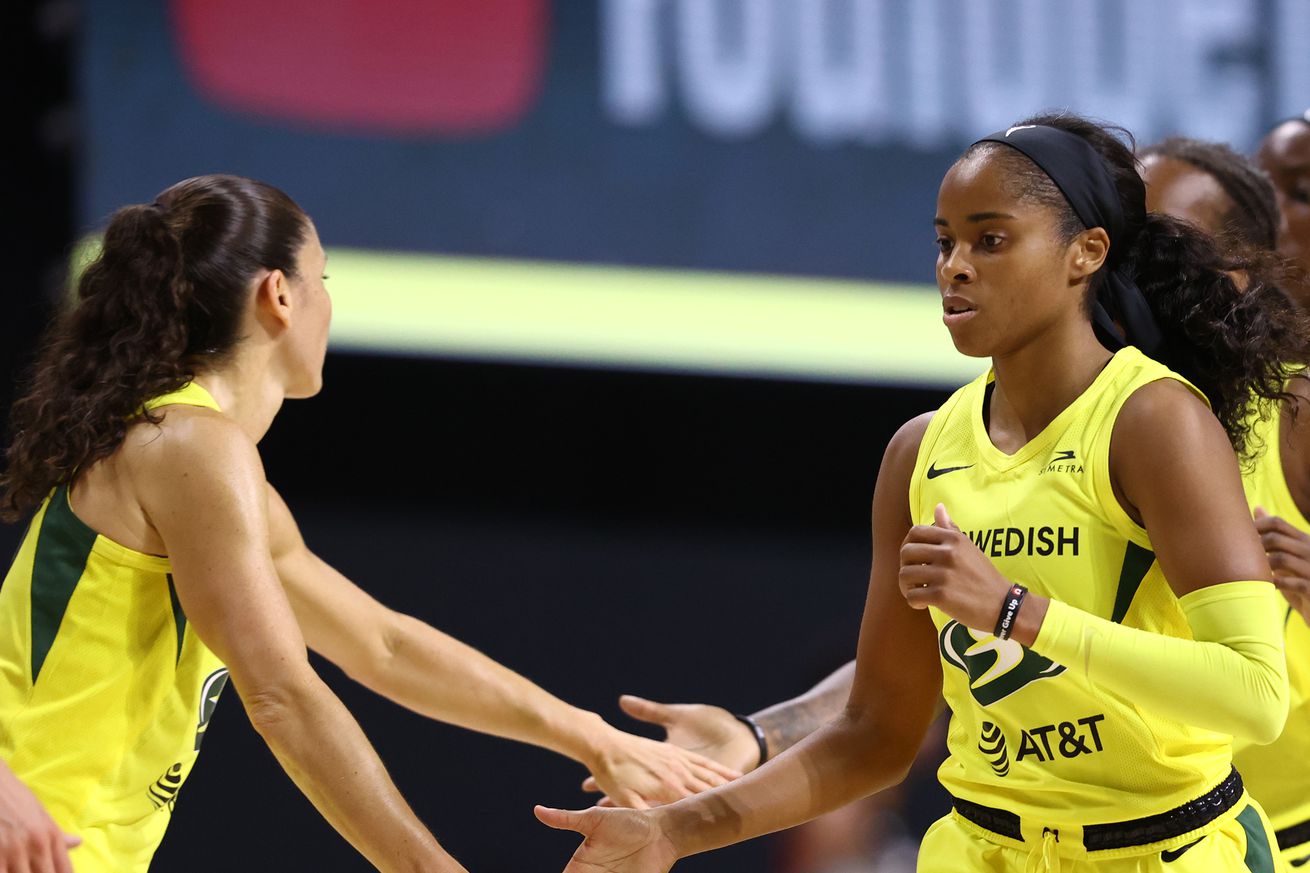 Is the future for Jordin Canada (facing) now? Or will the Seattle Storm guard have to wait another year to be handed the reins? | Photo by Ned Dishman/NBAE via Getty Images

Two championships in three seasons is an achievement for any sport. For the 2020 WNBA champion Seattle Storm, a quest for a third title in four seasons — a franchise fifth overall — comes with downsides. Will Seattle plan for the future in 2021 or cement its legacy of the past?

The Seattle Storm go as Sue Bird’s balky knee goes. At least, that was the take on the team’s potential to win the 2020 WNBA Championship — which they did, in dominant, undefeated fashion. Digging deeper, however, it’s not so much about Bird’s knee as it is about the team’s immediate goals and future plans.

Will the Storm keep the roster intact in 2021 and try to repeat for the title, giving the franchise its third trophy in four seasons and fifth overall? Or will they begin to push 40-year-old Bird into the background for the sake of developing younger talent in a bid for future success?

Before diving into the factors that will influence whichever path Seattle chooses, it is first important to examine how the Storm won it all in 2020. Simply put, the depth of talent proved to be too much for the other teams in the league with the return of Bird (knee) and Breanna Stewart (Achilles) from injuries that kept them sidelined in 2019. The Storm also were helped by the depleted rosters of competing squads — and they seized. But their road to a repeat might be a little bumpier in 2021 when the rosters for the rest of the league are whole. How might Seattle fair, for example, against the Washington Mystics, who won the title last year, when that franchise returns Natasha Cloud and Elena Delle Donne and debut Tina Charles?

Like any Hall of Fame-bound point guard, Bird can manipulate the offense in ways that oftentimes belie opposing defenses. Having her on the court, balky knee and all, gives her team a chance to win. But keeping her for 2021 comes with risks for the team’s future success. Should Seattle try to win it all now and deal with the future later? Or should it invest in the future now, but with hope for success in 2021?

This offseason, the Storm must pick one of the following two poisons:

Poison #1: Make a down payment on future success

If given the reins again in 2021, Jordin Canada can build on the greatness she flashed during the 2019 season when Bird and Stewart were out with injury. To do this, Bird perhaps would need to start in limited minutes and surrender the bulk of the position to Canada, or she’d have to come off the bench, still with minutes reduced enough to allow Canada a chance to develop and thrive. But this will only be possible if Bird, a free agent, is willing to re-up for the same contract she has now or take a pay cut that will enable the team to keep other, younger players who also have been integral to the team’s success.

Joining Bird in unrestricted free agency are two players who shape the team’s foundation on defense and who helped the Storm to their 2018 and 2020 trophies: Alysha Clark (age 33) and Natasha Howard (age 29). Clark in 2020 was the sole unanimous addition to the WNBA All-Defense Team — an apropos honor for a player nicknamed “The Eraser.” In 2019, Howard was named WNBA Defensive Player of the Year.

Clark displayed keen offensive powers in 2020, coming up with a game-winning shot in the playoffs and putting on sharpshooting clinics from beyond the arc. In other words, she has made herself invaluable to the team and more than earned the biggest contract allowed under the new CBA. Howard’s 2020 performance impressed less; with Stewart back in the lineup, at times there appeared to be a redundancy of duties, with Stewart — already on track to be considered one of the best to ever play the game — delivering with more consistency and efficiency than her teammate. So, if the Storm must settle for one of these defensive-minded players, it is most likely to be Clark over Howard.

As a committed offense-stopper, Clark should expect to field offers from teams seeking to shore up their play on that side of the ball. To keep her, the Storm will need to come up with a big payday and that may only be possible by cutting ties with Howard and moving on from Epiphanny Prince, who also is a free agent, if the goal is to keep Bird in a lesser role, perhaps coming off the bench.

Of course, a full investment in the future would mean not signing Bird to another contract at all. With her having played her whole career in Seattle, it is easier to envision her retiring rather than signing with another team. With all she has done for the Storm, the city of Seattle, the WNBA and women’s basketball generally, it is hard to imagine the franchise’s decision-makers will put Bird in that position. When it is time for Bird to retire, the decision will be hers alone.

And although the Storm proved in the playoffs they can win without 3-point threat Sami Whitcomb, Whitcomb’s contributions off the bench have been vital to the team’s growing identity as a team that succeeds on scoring blitzes. If Jewell Loyd or Stewart have an off night, Whitcomb can be relied upon to pick up the scoring needs in spurts off the bench that demoralize opponents. She is a restricted free agent and the Storm should do what they can to keep her.

Poison #2: Strive for a Bird-Stewart-era dynasty

Storm Crazies will not be pleased to hear it, but their favorite team in the Emerald City is not a dynasty. That designation belongs to the Houston Comets, who won four titles in a row between 1997 and 2000, and the Minnesota Lynx, who won four championships in six seasons (2011, 2013, 2015 and 2017). Although the Storm have won four championships, they won them across decades: 2004 and 2010 (the Bird-Lauren Jackson era) and 2018 and 2020 (the Bird-Stewart era).

To make it a dynasty, which Merriam-Webster defines as “a powerful group or family that maintains its position for a considerable time,” the Storm need to win another title.

This further definition of “sports dynasties” better explains why — the Storm lack “a prolonged run” of title seasons:

Dynasty has been in use in English for over 600 years, for most of that time referring to a ruling family that maintains power through succession. Around the beginning of the 19th century, the word developed the figurative sense “a group or family that dominates a particular field for generations.” Nowadays, this sense of dynasty is often applied to a sports franchise which has a prolonged run of successful seasons. The sports use appears to have begun in the early 20th century. An article in The Washington Post in 1905 refers to “John T. Brush’s baseball dynasty,” and by 1912 the St. Louis Post-Dispatch reported that “if players were free agents at the end of every two years, baseball dynasties such as those built up by the Cubs, Athletics, Detroits and Giants would not be possible.”

The chance of the Storm attaining dynastic status is more likely with Bird in the mix, no matter the role, and winning a franchise-fifth championship would cement her individual legacy as well. With Bird or without her, the Storm have a chance to ascend in 2021. But sticking with Bird at the expense of developing the next generation of Storm champions could cost the team titles for seasons to come.