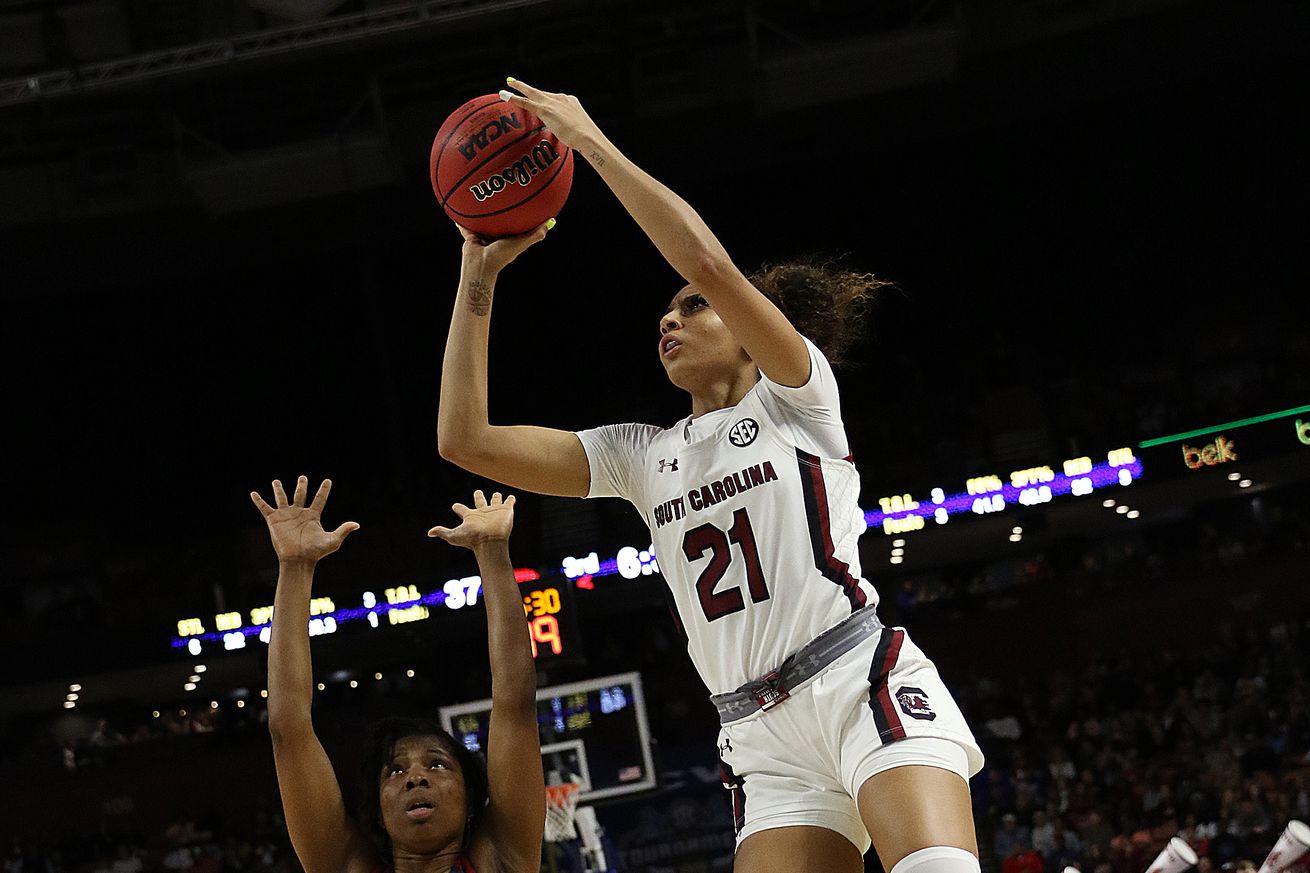 The South Carolina Gamecocks are your 2020 SEC tournament champions after defeating the Mississippi State Bulldogs 76-62 and securing an undefeated (19-0) record in conference play. The tournament title is the Gamecocks’ fifth in the past six seasons.

However, the story of the 2020 SEC tournament is not one of South Carolina’s foreordained dominance. In their run to the conference tournament championship, the No. 1-seed Gamecocks demonstrated a trait necessary for any title-minded team: adaptability.

Despite their season-long excellence, experience — or lack thereof — has remained a question for the Gamecocks, with head coach Dawn Staley relying on three true freshman. The back-to-back-to-back rigors of tournament play, in particular, presented the young Gamecocks with an uncharted challenge. They did not navigate it perfectly, struggling to gain early separation from the No. 9-seed Georgia Lady Bulldogs in the quarterfinals and threatening to relinquish their 19-point lead over the No. 5-seed Arkansas Razorbacks in the semifinals.

Yet Staley’s squad adapted, calling on their depth to get the job done. Destanni Henderson shone as the tournament’s sixth-woman sophomore super sub. Against Georgia, the Gamecocks’ reserves righted an inconsistent start, including 10 points and seven assists from Henderson. South Carolina stunted Arkansas’ second-half charge with some sharp long-distance shooting, something that had eluded them of late. Henderson cashed in four 3-pointers on her way to a career-high 21 points.

A USC showcase in the championship game

In the championship game, South Carolina “Woman’d Up,” flashing its potential with a complete performance. The Gamecocks turned defense into offense, using the transition game to score easy buckets.

The Gamecocks also claimed ownership of the paint, allowing them to efficiently extinguish the Bulldogs. Mikiah Herbert Harrigan led this all-round effort, scoring a team-high 15 points as she set the tone for her younger teammates. Fellow senior Tyasha Harris posted 10 points and 10 assists. Both would be named to the All-SEC Tournament Team, along with Henderson. Herbert Harrigan was named MVP of the tournament.

State shined on their way to the title game

Even though it fell short against South Carolina, No. 2-seed Mississippi State impressed as it made its fifth straight SEC tournament championship game.

In both their quarterfinal victory over the No. 7-seed LSU Tigers and semifinal win over the No. 3-seed Kentucky Wildcats, the Bulldogs turned in strong second halves, reaching another offensive level to overtake their opponents.

In each contest, Rickea Jackson drove these displays of offensive excellence. Against the Tigers, she scored 19 of her 23 points in the second half. She also filled up their entire box score, grabbing 10 rebounds, tossing three assists, snagging two steals and registering one block. Jackson put up even bigger scoring numbers against the Wildcats, tallying 29 points as she shot nearly 70 percent from the field. Fellow freshman Aliyah Matharu assisted her in putting Kentucky away, scoring 13 of her 15 points in the second half.

With Aliyah Matharu’s second-straight basket, the Bulldog freshmen have scored all nine of State’s points this quarter!#HailState pic.twitter.com/tHKeMeDf91

Even though Jackson struggled against South Carolina, totaling only nine points and shooting 4-of-12 from the floor, she did more than enough to earn a spot on the All-SEC Tournament Team.

Averaging 20.3 points and 8.3 rebounds over three games, Rickea Jackson is the ONLY freshman on this year’s #SECWBB All-Tournament Team.#HailState | @iamthathooper pic.twitter.com/qCnUvhpXpF

The significance of the SEC tournament extends beyond the efforts of the Gamecocks and Bulldogs. Here are three other important takeaways from the 2020 SEC Tournament.

With strong SEC tournament performances, the Alabama Crimson Tide and Tennessee Lady Vols could have secured their places in the NCAA tournament. Instead, both squads disappointed. The Tide exited the tournament after a single game, as the No. 8-seed fell to Georgia, the No. 9-seed, thereby ending any Big Dance dreams.

While Tennessee did defeat the No. 11-seed Missouri Tigers in its second-round contest, the No. 6-seed Lady Vols were then outclassed by the No. 3-seed Kentucky Wildcats, 86-65. According to ESPN’s Bracketology guru Charlie Creme, Tennessee must now rely on the generosity of the selection committee to avoid missing the NCAA tournament for the first time in history. Such a fate would end the first year of the Kellie Harper era on a sour note, raising questions about what else needs to happen to get Rocky Top back to the top.

The No. 5-seed Arkansas Razorbacks claimed the most exciting victory of the SEC tournament, erasing a 17-point deficit to defeat the No. 4-seed Texas A&M Aggies in their quarterfinal contest, 67-66.

After a lackluster first half left Arkansas trailing by 12 points at halftime, the Hogs used their signature scoring ability (in addition to an engaged defensive effort) to steadily shrink the Aggies’ lead. While Arkansas’s trio of scoring dynamos — Alexis Tolefree, Chelsea Dungee and Amber Ramirez — relatively struggled, Makayla Daniels and Kiara Williams stepped up. Daniels not only dropped a team-high 13 points but also was responsible for slowing the electric Aggie, Chennedy Carter.

But the comeback would be for naught if not for Williams. She coolly drained two clutch free throws with 8.6 seconds to go, giving the Razorbacks their first lead of the game and, more importantly, the victory.

Worth A Thousand Words #SideBySide pic.twitter.com/BWYbAp5a38

In its semifinal matchup against South Carolina, it appeared that Arkansas might make more comeback history. Trailing by 19 points at halftime, the Hogs again awoke at the start of the second half, quickly cutting the Gamecocks’ lead to seven points. Yet South Carolina showed why it is the No. 1 team in the SEC, and the nation, snuffing out Arkansas’s comeback bid.

Nonetheless, no top seed should want to see Arkansas on its side of the bracket in the NCAA tournament. A lead is never safe against one of the nation’s most explosive offenses.

After scoring 20+ points in both games this weekend, @howard_rhyne has been named to the five-member SEC All-Tournament Team. #WeAreUK

The SEC Player of the Year posted an efficient 24 points against Tennessee in the quarterfinals, adding eight rebounds, four assists, three steals and a block. After a scintillating start against Mississippi State in semifinals, scoring 11 first-quarter points, Howard was slowed in the second half. Despite converting only 2 of her 12 3-point attempts, she still found ways to get buckets, finishing with 26 points.

This is why @howard_rhyne is SEC Player of the Year! pic.twitter.com/fC4URUvMOB

With Sabrina Ionescu about to bid adieu to the college game, there will be an opportunity for someone else to establish herself as women’s college basketball’s signature star. Might it be Howard?

As a 6-foot-2 guard who can score in bunches from any spot on the floor, and who also possesses elite defensive ability, Howard seems destined for a promising WNBA career. If Kentucky, a projected 6-seed in the NCAA tournament can make a run to the Sweet Sixteen, or even the Elite Eight, Howard could have a national coming-out party.