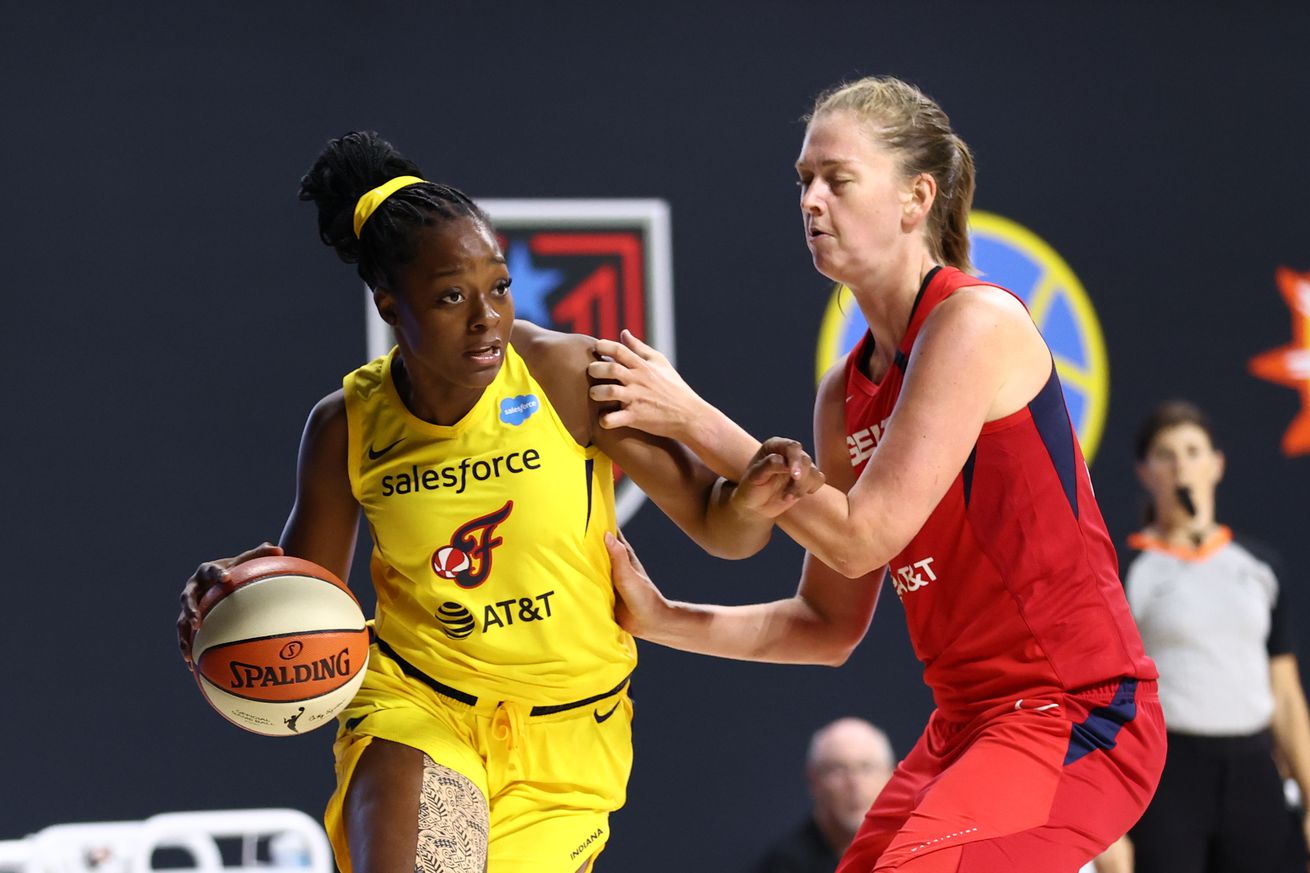 Stephanie Mavunga (left) attempts to drive past Emma Meesseman of the Washington Mystics during a game on July 25. | Photo by Ned Dishman/NBAE via Getty Images

Third-year player Stephanie Mavunga has replaced nine-year vet Jantel Lavender, who is sitting out the 2020 season and is now a member of the Indiana Fever. Mavunga joins Stefanie Dolson, Cheyenne Parker and Ruthy Hebard in the Chicago Sky’s frontcourt.

The Chicago Sky announced on Friday that Stephanie Mavunga is now a member of their team after acquiring her from the Indiana Fever, who got Jantel Lavender and two 2021 draft picks (a second-rounder and a third-rounder) in the deal. Lavender is currently recovering from foot surgery outside the bubble.

Mavunga, a 6-foot-3 forward, has been out since Aug. 7 with a facial injury, but has now been cleared to play. She played just 8.5 minutes per game and averaged just 2.4 points in her first two years in the WNBA after being taken by Indiana as the No. 14 overall pick in 2018. In the five games she has played this season, her numbers are up to 5.0 points and 4.0 rebounds per contest.

The Sky are currently in fifth place in the WNBA at 10-5, while the Fever are in ninth at 5-10. Chicago head coach and general manager James Wade had the following to say about the move:

This is a strong hit for our leadership as far as losing Jantel, a seasoned veteran with championship experience, such a great person, and someone who played well in the Chicago uniform. With all the injuries and with the competitive season, we felt that it was best for the betterment of our team to add another young piece that was good player and had great character. … It’s a tough day for us, but we’ll feel good when Stephanie gets here and we’re able to welcome her in like family. These things are always bothersome, especially for a coach and especially in this day and time. When you are making decisions like these, you don’t make these decisions lightly, but we have to do what’s best for the players that are playing and it was obvious to us we had to have healthy bodies.

The Sky have also lost 6-foot-6 forward/center Azurá Stevens for the season due to a knee injury and one of their star players from last year, Diamond DeShields, has left the bubble for personal reasons.