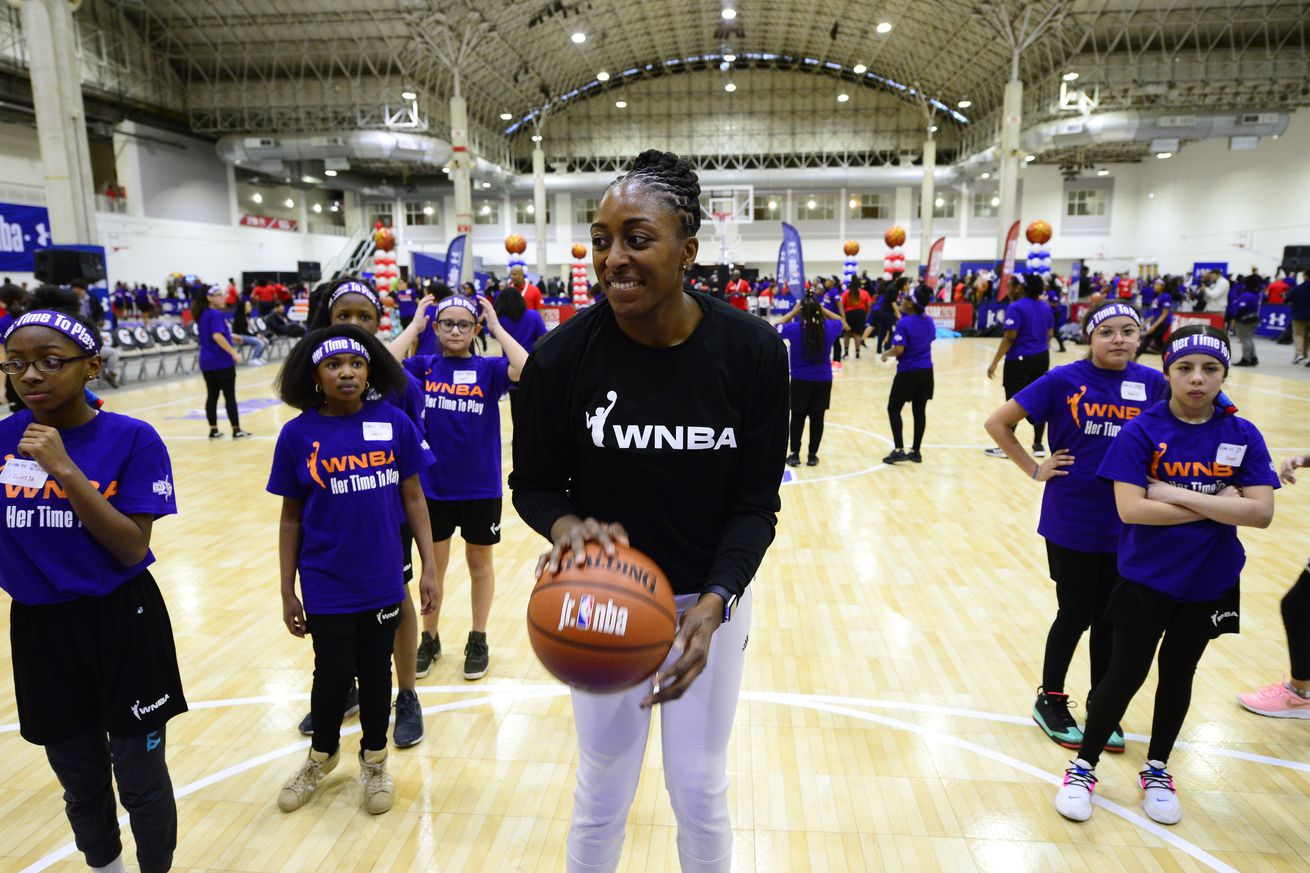 WNBPA president Nneka Ogwumike, pictured here at Jr. NBA Day in February, ensured social justice causes will be at the center of the 2020 WNBA season. | Photo by Tom O’Connor/NBAE via Getty Images

The WNBA and WNBPA are using the odd, uncertain circumstances to their advantage, dedicating the 2020 season to the amplification of social justice issues. The Social Justice Council and “The Justice Movement” headline a range of efforts intended to contribute to systemic change.

The WNBA’s basketball “bubble” will be “Bigger Than Ball.”

On Monday, as teams and players began to travel to Bradenton, FL for the single-site 2020 season at IMG Academy, the WNBA and WNBPA announced that this season will be formally dedicated to social justice.

WNBA announces a 2020 season dedicated to social justice with games honoring the Black Lives Matter movement and the #SAYHERNAME campaign.

The WNBA and WNBPA have partnered to establish the WNBA/WNBPA Social Justice Council. As explained in a press release:

The collaborative efforts of the League and the Players Association represent an unprecedented and bold new commitment to advancing social justice by the longest standing U.S. sports league for women, as well as the first labor union for professional women athletes. The mission of the Social Justice Council is to be a driving force of necessary and continuing conversations about race, voting rights, LGBTQ+ advocacy, and gun control amongst other important societal issues.

Player members of the Social Justice Council include:

The players will be advised by social justice leaders Alicia Garza, best known as one of the co-founders of Black Lives Matter who also is the founder of Black Futures Labs, Carolyn DeWitt, the CEO of Rock the Vote, and Beverly Bond, the founder and CEO of BLACK GIRLS ROCK!, among other advisors to be named later.

As a complement to the Social Justice Council, the WNBPA also has founded The Justice Movement, a platform designed to “drive impactful, measurable and meaningful change” through “community conversations, virtual roundtables, player-produced podcasts, and other initiatives to address this country’s long history of inequality, implicit bias and systemic racism that has targeted black and brown communities.”

The Justice Movement: THE W LEADS

This off-court work will be complemented by on-court public awareness campaigns.

Angel McCoughtry’s “Say Their Name” jersey proposal will be realized. For at least one weekend of game action, teams will wear jerseys with the names of women and girls “who have been the forgotten victims of police brutality and racial violence,” such as Breonna Taylor, Sandra Bland and Vanessa Guillen.

God is so Amazing !! We have yet to scratch the surface into making a better America ! People have asked , what is putting the names on a jersey gonna do ? Well we plant seed for a better tomorrow. Yes , it takes time to grow but in due time amazing things will bloom. People doubted Muhammad ALi when he didn’t want to fight in the Vietnam war. He planted the seed in what he believed in and in due time he got everything back plus he changed the views of our system. Change is coming , justice is coming, A better America is coming ! ✊ ✊ ✊ long live America

On this range of initiatives, WNBA Commissioner Cathy Engelbert stated:

We are incredibly proud of WNBA players who continue to lead with their inspiring voices and effective actions in the league’s dedicated fight against systemic racism and violence. Working together with the WNBPA and the teams, the league aims to highlight players’ social justice efforts throughout the 2020 season and beyond. Systemic change can’t happen overnight, but it is our shared responsibility to do everything we can to raise awareness and promote the justice we hope to see in society.

As many WNBA players–past and present–have said and, more importantly, consistently demonstrated, the reason why you see us engaging and leading the charge when it comes to social advocacy is because it is in our DNA. With 140-plus voices all together for the first time ever, we can be a powerful force connecting to our sisters across the country and in other parts of the world. And may we all recognize that the league’s stated commitment to us – in this season and beyond – offers a pivotal moment in sports history.

In short, the “bubble” will be a platform, with the WNBA and its players taking advantage of the exceptional circumstances of the 2020 to encourage positive, sustainable social change.